After Being Found Liable in Civil Court for the Killing of Jacob Dominguez, San Jose Police File a Restraining Order Against His Mom

The City of San Jose has issued a retraining order against the mother of Jacob Dominguez, who was killed by San Jose police. Jacob's family recently won a civil suit against the officer Mike Pina, when a jury found his lethal force unlawful. In a retaliatory act, the City filed a restraining order against Jacob's mother. The community has called on the city to drop the order.

(The following letter was submitted to the Mayor and City Council on December, 8, 2022)

To Mayor and City Council of San Jose,

We call on the City Council of San Jose to drop the restraining order against Cindy Chavez, mother of Jacob Dominguez, who was killed by San Jose Police on September 15, 2017.

Background:
On August 31, 2022, a federal civil jury found that Sergeant Mike Piña was liable for the killing of Jacob, violating Jacob’s Fourth Amendment Rights in violation of 28 U.S.C. (S) 1983, and awarded damages to Jacob’s family. Jacob was a dedicated husband, father, son and loving family member. Just shy of his 34th birthday, SJPD Sergeant (then Officer) Mike Piña took Jacob away, leaving behind his three young children and a huge circle of family and friends that looked up to him as a leader. He was the glue to the family. Jacob was loving and respectful with a heart of gold - he'd give his shirt off his back to anyone in need. Immediately after he was killed and throughout the course of the civil trial, SJPD and the City of San Jose tried to dehumanize Jacob, criminalizing him for his past.

Jacob took part in the locally produced documentary called “Making of a Gangsta” that humanized those the City has criminalized as gang members. The movie showed who Jacob was at the time of his death: a committed family man who had changed his life around, despite his difficult background growing up. In the documentary, he was quoted saying:

“My hope for this film is when people see someone like me they see the good.” 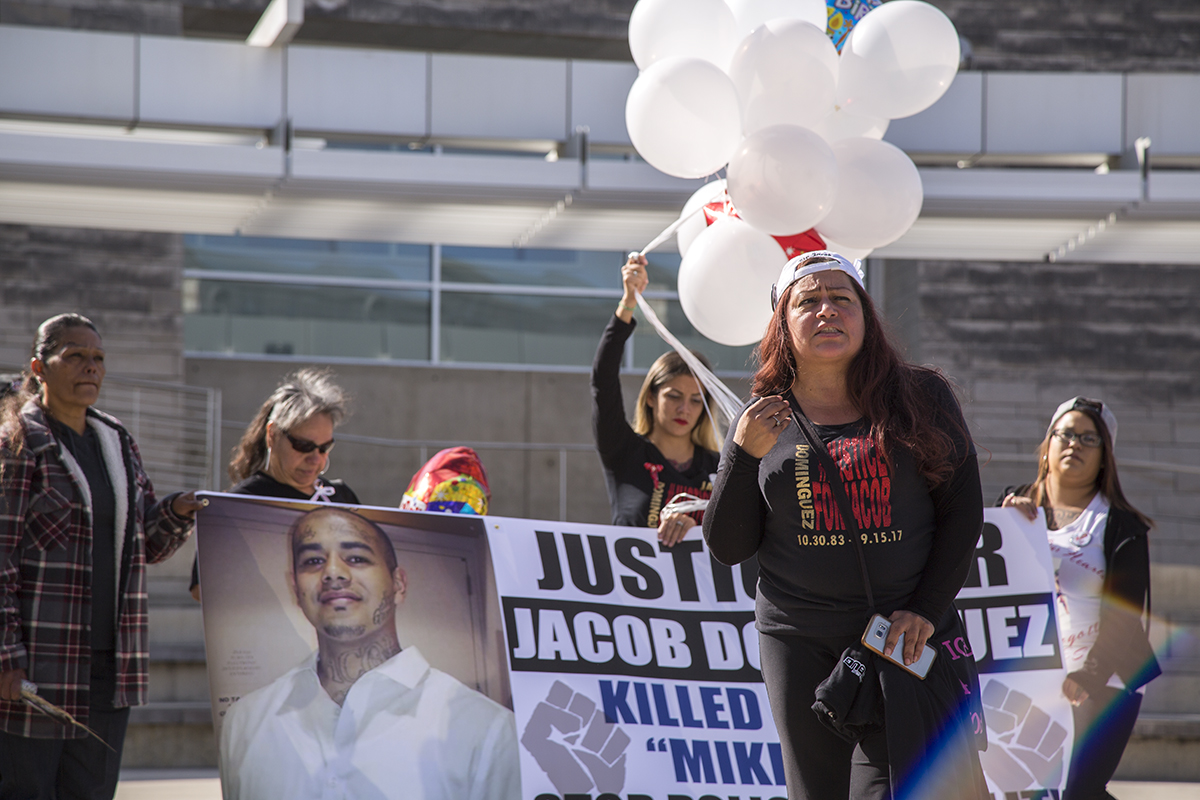 Family of Jacob Dominguez hold rally calling for accountability after he was killed by SJPD Officer Mike Pina. Jacob's mother, Cindy (on left), has been issued a restraining order by the City of San Jose in order to intimidate her and the community.

Retaliation and Intimidation Imposed on a Grieving Mother
On September 30, 2022, Cindy Chavez, Jacob’s mother, was served a restraining order by the City of San Jose, on behalf of Sgt. Mike Piña. The City is labeling Cindy, a grieving mother, a threat for comments she allegedly directed at him.

This restraining order sends a chilling message to all grieving families who lost loved ones to police violence.  It says even in death caused by the police officers in our own city, that families must contain – even silence – their pain. This restraining order is also a sick attempt by the City to portray Officer Piña as the ‘victim’.  Officer Piña and the larger community could falsely perceive Officer Piña as having the right to cause Jacob’s mother Cindy harm if he sees her in the community – putting her life in danger.  Family members and community members are fearful for her life and safety.   Already, Cindy is in emotional distress due to the death of Jacob, and this restraining order further adds to it.

Already, Officer Pina’s violent pattern of behaviors has cost the taxpayers millions of dollars in civil lawsuits.  The City spent countless hours in five years defending this rogue officer – including hiring John Black, the expert who defended white supremacist Kyle Rittenhouse, to testify for Officer Pina, effectively placing the City of San Jose on the side of defending this racist and deadly behavior. In addition to the damages awarded in Jacob’s case, the City has also settled a previous excessive force lawsuit also caused by Officer Piña. In a case that reached national news, Officer Piña was also involved in a critical use of force incident where he pulled Marissa Santa Cruz to the ground, tased her and her partner Paea Tukuafu, and instructed other officers to attack the young couple.  That case also resulted in a settlement.  Officer Pina is arguably the most expensive police officer on the force.

It is truly appalling that it is the City of San Jose going beyond its existing defense of Mike Piña by seeking this restraining order and causing families like Cindy’s further trauma. Meanwhile, the City turns a blind eye when it comes to the loved ones left behind by these violent deaths.

The Community Call
We call on the City to drop the restraining order on Cindy and stop the practice of further traumatizing families who lost loved ones to police violence. We call on the City to fire Mike Piña for the pattern of violent behavior towards the public and hiding behind the City Attorney. We call for transparency from the City as to how the decision to file the restraining order was made, who authorized that decision, and cost to taxpayers, and the funding source of this civil action.