Eduardo is a 34 year old animator and DACA recipient who has felt the spectrum of emotions that come with a temporary work permit, while millions of others are left without an opportunity for a change in their status. When his DACA expired his increased vulnerability brought him back to the fight for immigration reform for all. 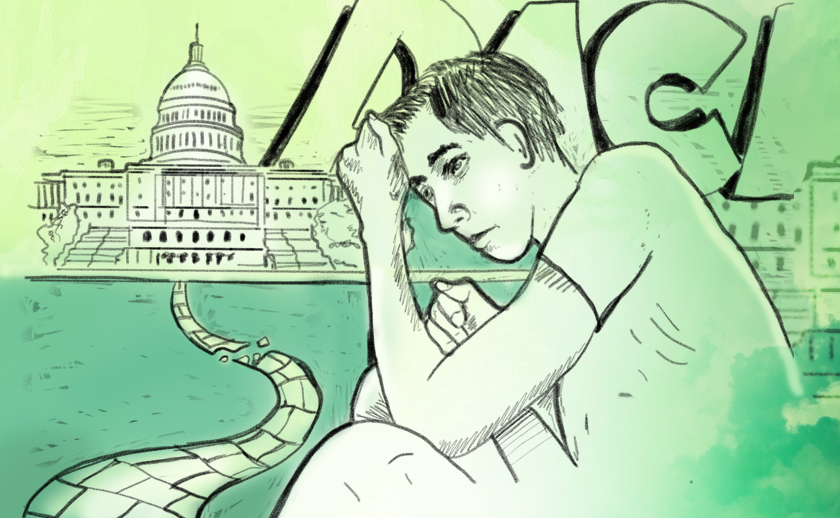 The stories of immigrants being arrested throughout the country by ICE since Trump became president have only fueled my fear that I could also be arrested soon, especially because my DACA had expired. As a DACA recipient, it feels like the government has betrayed our trust, it feels like we have been made a target.

I felt vulnerable the very first day my temporary protection through DACA expired. I imagined that I had been denied and that eventually ICE would pick me up at my house. I tried not to go outside often, and I was afraid that knocks at the door were ICE. But every time these thoughts entered my mind I shook them off by reminding myself that I feel safe living in San Jose.

I tried not to go outside often, and I was afraid that knocks at the door were ICE. But every time these thoughts entered my mind I shook them off by reminding myself that I feel safe living in San Jose which has declared itself a sanctuary city.

My mother brought my brother and I to the United States when I was ten. I have lived in San Jose and attended school here and I thought I was pretty much like everyone – that I could do everything everyone else was doing.

I learned the harsh truth of my legal status towards the end of my junior year in high school when I wanted to get a driver license and I was planning to attend an animation school in Montreal, Canada. My parents told me I wasn’t able to obtain a driver’s license because of my immigration status and I wouldn’t be able to go to Canada for the same reason. This reality caused me to develop a depression that lasted throughout my senior year in high school.

That last year in high school I became detached from everyone. I believed that because I was undocumented I would not have a positive future and that my goals in life were unreachable. I didn’t get in trouble, I just wasn’t putting effort in school. Luckily, I met a teacher who helped me and gave me advice. My friends who knew my story shared it with her and although she was never my teacher I went to talk with her.  She told me, “You are not going to get nowhere in life even if you were a legal citizen. Nothing is impossible if you don’t try to succeed.” This teacher’s advice motivated me to raise my grades and get into college.

Due to my immigration status it took me nearly ten years to graduate from San Jose State University because I had no access to financial aid; I paid my tuition in cash. My only motivation was wanting to work in the animation industry, dreams of working on the production of The Simpsons and to eventually produce my own animated series based on my self-published comic books.

I graduated from SJSU in 2012 with a B.F.A in animation. In 2013, I obtained my work permit through Deferred Action for Childhood Arrivals which I applied for soon after president Obama announced. I was happy and relieved that I finally was able to apply to a job without the fear of not being accepted due to my status. I renewed DACA once without a problem, but my second renewal did not arrive in time and I was no longer able to work at my job as an animator.

I eventually called to learn the status of my renewal and while I didn’t get a clear answer, not receiving a denial letter was some hope, and later while writing this I was filled with joy because I received the renewal and can go back to my job. Even though it is not related to animation, it’s a job that gives me joy because I get to interact with many people from different cultures. I work as a supervisor that enforces rules to vendors and customers and it has helped me develop communication skills.

It would be great if DACA recipients could be given the opportunity to apply for citizenship because we have proven that we are essential to society and the U.S. economy. According to The Center for American Progress, legislative reform with a path to citizenship would create extensive economic benefits, increasing the GDP $1.2 trillion over ten years and create 145,000 jobs annually.

I am grateful to live and work in San Jose, a city that understands the immigrant struggle. Even with that, I am hopeful that DACA recipients and other immigrants can transform the fear imposed on us to stand up together and demand justice and equality.

Once DACA came into the picture a lot of momentum died down around the immigration fight and most people don’t even bring up immigration reform now. It seemed like some folks were almost content to be able to legally work even though deep inside we know it was just bread crumbs; we didn’t get what we wanted. There are millions of folks who didn’t qualify for DACA and along with those of us who have to worry every two years, we could move the struggle forward for immigration reform and paths to citizenship.