The first in a series of youth reflections on what it's like growing up in the San José neighborhoods they love and are proud of - the same neighborhoods the SJPD has labeled gang hotspots.

I was three when we first moved to Valley Palms, and we lived there for ten years. Valley Palms is located in the Eastside on Tully and Lanai. They are big brown apartments on the backside of Highway 101. If the apartments had a voice, it would sound like moms screaming for their kids in the afternoon, and at night it would be the cars off the freeway and of music blasting from parties. If the apartments had a smell, it would be the spices and home cooked meals from all cultures -- Indian food, barbeque, Chinese food, Soul food, and of course, Mexican food. There’s palm trees everywhere.

Hella people live there. Everyone knows each other. Everyone knew my name because my mom would scream it all the time. And when neighbors would hear it, they’d tell me to go home. My mom is crazy, but so so loving. She loves everyone. She’s 5 feet tall, and in those days, the days before my brother went to the Department of Juvenile Justice, and our family was all together, she always dressed nice -- dresses, heels, nice shirts and pants. Everyone would know she was home because when she cleaned our house, she’d play her loud music. We lived in a 2-bedroom townhouse. The rent back then was a $1,400 month.

The kids in the neighborhood - us and my brothers - we all just kinda knew each other. Our “spot” was the parking lot. There was a bunch of times where we’d be standing there, on the parking lot, and it wasn’t everyone else’s parking lot. It was just ours -- our car space and my brothers’ friends space. We would just be hanging out, just stand there -- talk, laugh, make jokes, waiting for mom. And when the neighbors would come, we’d say hi to them. Everyone was friendly with everyone -- all the boys and me. Ten boys - all of us were Mexicans, teens -- the youngest was my brother who was 14. I was 12. I grew up with most of them. They took care of me, always looked out for me.

We looked out for each other because everyone’s mom and dad was working. One of them worked at an airport. One of them at the market.  But my mom -- whew. She was their second mom -- taking care of everyone’s kids. When she’d come back from work as a caterer, she’d bring home trays of foods. Man, she’d bring home fancy food like -- salmon, rice, chicken, steak, ribs, pasta, everything and anything. There was all this extra food from the companies where she’d be catering -- like Stanford, Google. Sometimes it would be weddings and birthdays and she’d come out with trays of food.

All of the boys would wait for her to come home. And when she’d pull up, they’d help her out the car - bring the trays in. We’d ask people if they were hungry - and that’s the way it was for everyone. Then we’d all eat together. That’s how we looked out for each other.

My mom would give the boys jobs too. When they got old enough - 18 - or at least were tall enough to pass for 18, she’d give them jobs to cater. It would be their first real paycheck. She’d tell them, ok this is what you gotta dress like. These are the shoes, the shirts. This is how you gotta be. And when my mom would take them to go pick up their first check at the office they’d be so happy. It would show on their faces. 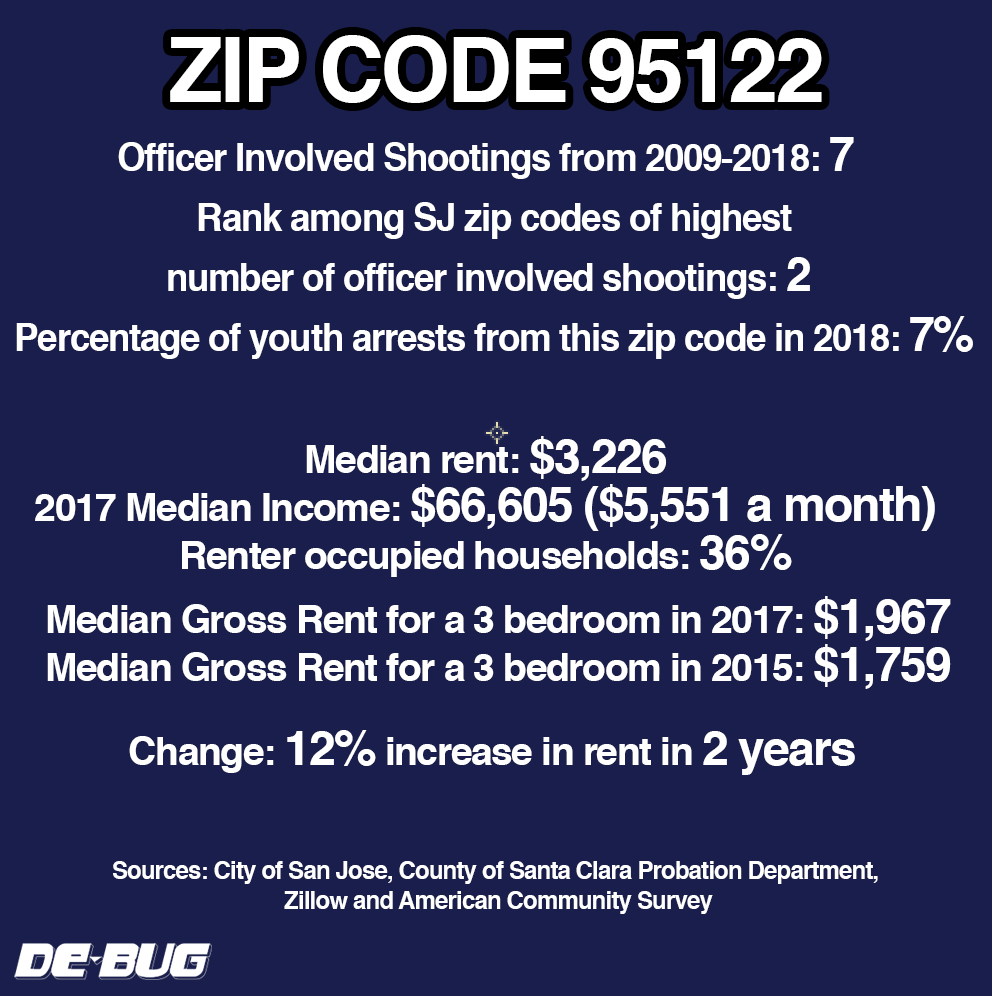 This is how we would live. Our neighborhood. We always watched out for each other, especially when the cops came. They would come at least twice a week, sometimes almost everyday, but especially over the weekend. Sometimes, the cops would come out of nowhere. The parking lot comes in like a circle. There’s an entrance, and they’d rush in. They knew most of the boys were on probation, and they’d run up on the boys. The boys would run because they didn’t wanna go back to the hall, or just didn’t wanna interact with the police. Not because they were hiding anything, they were just there.

Cops would roll up and ask - what were you doing here? Some of them live there, some of them didn’t but they were our friends. The school most kids went to was Overfelt, and we’d see them following kids from Overfelt to our neighborhood, and ask where the kids were going.

If the boys were sitting on the curb, the cops would pull up really fast, almost running them over. Mom would yell and ask, “What are you doing?”

When my mom would see the cops, she’d always stick up for the kids. She was the real check for these boys -- the one they’d listen to. She was the one who would tell them not to smoke, to get a job, to go to school. She would always make sure they were okay. That’s the kind of mom she is -- the one who visited other kids in juvenile hall because there was no one visiting them.

Living in Valley Palms was also scary. There would be rival gangs from other complexes who’d come over with guns, but we’d all know to run and hide in our apartments. Someone asked my mom in English, “What do you throw”? She said the garbage. She didn’t understand that they were asking her what do you bang?

But even with that, I was still more scared of the cops. They were so violent to the kids, to my friends, to families. Other kids could fight each other and handle that, but people couldn’t fight against the police. I would see the police just grab these little boys. One time, my mom saw the cops hit a young boy with a baton. It was at night. She was coming home from work. The young boy was standing there. He was young, bald-headed, wearing a Sharks t-shirt. The cops asked him, “What are you doing?” He said, “I’m not doing anything. I live here.” The cops then started hitting him with a baton. He was yelling for his mom through the back fence, and my mom got his mom to come out.

This other time, the boys were just in a parking lot. In that same space they always hang out in. The cops came. Some of them had probation and they ran. The cops got off the car, and as soon as they got out of the car, they already had their hands on their guns. That’s what scared me the most --- that they were that ready to shoot. The boys were doing nothing -- just what we do everyday.

When my mom came to the United States, she told me she was telling someone that she looked at cops as heroes. But then after us living in Valley Palms, she doesn’t feel that anymore. She experienced domestic violence, and at first my family was grateful for the cops helping us. But then, seeing the way they treated us and our friends and neighbors, she doesn’t trust them anymore.