AJ Phillips Was Killed by SJPD in 2015

A fearless mom remembers her son and the impact he had on their family and everyone he touched. He is missed and his loved ones are working to expose the truth of his unnecessary death at the hands of SJPD in 2015.

AJ was the oldest of my three children, whose first love was our little family.  On August 10, 2015, our little family was shattered when our AJ was killed in an officer-involved shooting by San Jose Police.  The news would describe him as mentally disturbed, but he was the rock of our family who pushed everyone around him to be their best. He just needed help that evening, and now he is gone.

Being a single mom, I relied on AJ to take responsibility at a young age to help care for his younger brother and sister. During my early work hours in Alameda, I left the house at 5:00 am to be at work by 6:00 am. That meant he had to help get all of them off to school, and make sure they all walked home together. He would make sure homework was started, until I got home. They were basically “latchkey kids.” Nonetheless, the four of us made it  work out. There was a bond between us like no other, and we revered him as our protector.

AJ worked as a hazmat technician for eight years, during which he received an award for his exceptional customer service. He worked with both biological and hazardous material waste, but I know he preferred the hazardous materials disposal more so than the hospital waste.

He loved family gatherings, when we all got together for the holidays or barbecues. He’d always request I make his favorite dish, my Mac N Cheese; it was his Big Mamma’s recipe from his father’s side, and greens which was my own recipe. He loved the 4th of July festivities with his friends. They had a yearly traditional block barbecue. His laugh and dimpled smile was infectious, and now the holidays are not the same anymore.

AJ especially loved to spoil me. He would take me shoe shopping on my birthdays, and on Mother’s Day and Christmas he would buy me jewelry – from fancy watches to diamond rings. One of my fondest times alone with him was on Mother’s Day. He took me to one of my favorite wineries and said, “You can get whatever you want mom.” The ladies got a big kick out of him, and said that was sweet of him to take me wine tasting. He was very protective of me, and would always ask me when I was going to find a man. He would go on to say, not just any man – a good one. I said to him, what do I need a man for? His response was, so that I don’t have to worry about you so much.  I love him for that. He made me smile inside.

His favorite sports teams were the Oakland Raiders and the Golden State Warriors, he enjoyed going to the games. His other favorite pastime was visiting my family in the City where he would go to the music studio with his cousins Roger, Linda and Brittany. He was known to spit a verse or two, but preferred to be in the videos and photo shoots. His name on the streets of San Francisco’s Excelsior District was PEPP, which was short for pepper. He was known to be that fly guy; with his attire and hair on fleek… Here in San Jose everyone called him AJ. He considered all his friends family, and would be there for anyone day or night if they needed him. He loved them all so very much, and was a big presence in all of their lives.

He wanted to have children, but never got the chance. However, one of his friends Stevie has a son named Andre, and AJ became very fond of him. In fact, he would pick him up from the sitter for his mom from time to time. All his friends were shocked to see him rolling with a car seat in his car, but they were not surprised. AJ was LOVE… he had the biggest heart of all of us. He had that bad boy exterior look at times, but was a teddy bear at heart. 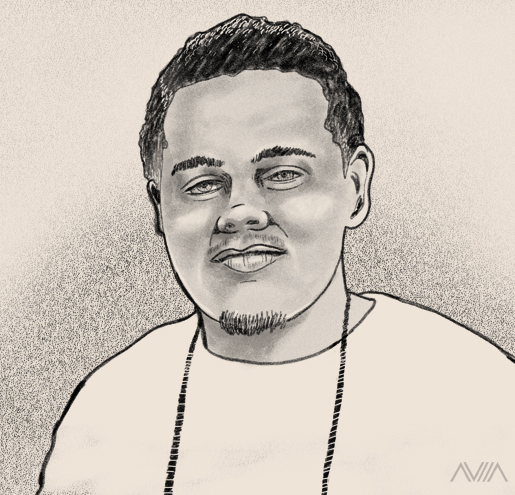 AJ's brother, Andrew, is a talented artist and recorded the song
"Let it Go" to accompany his mother's story.

At his service, his good friend Chino made me the most beautiful computer graphic canvas portrait. Within the gold chain AJ is wearing are three silhouetted pictures of me, his brother and sister. Chino stated this was his heart! This is displayed in my hallway in a beautiful gold frame. He was and still is such a presence in so many lives, there were nearly 300 who attended his service. To this day, some come and visit the birdbath memorial I have in my front yard day and night just to feel close to him. Our family’s quest for answers go beyond any existing law enforcement agency. I have approached so many of them to ask for independent investigations only to be told SJPD did their job. However, we will continue to seek justice by showing the truth, and asking the Department of Justice and the FBI to reconsider our families evidence and open an investigation surrounding his suspicious and untimely death. Now, I’m a part of a community of families who lost loved ones to police violence here in San Jose. We turn to each other to support each other and heal.

A piece of everyone has died along with AJ; we will keep him alive though with a whole lot of nothing but love!

Related Media:
Words I Never Thought I Would Have To Say, "Justice for Harpo"
Jacob Dominguez Should Be Celebrating His 34th Birthday
A Performance Dedicated To My Brother Phillip Watkins