Across the world we see how the seeds of our country, colonization, and capitalism have created imbalances in the social and economical landscape in the world. One tool that has allowed those that have been oppressed by these imbalances to be heard and felt is the movement of Hip-Hop. This tool, that comes from the larger African diaspora, is also how Adisa Banjoko, known as the Bishop of Hip-Hop, found freedom in this world as a young black man in a west coast town called San Bruno. His parents were from Louisiana, but met as adults in the Bay Area. Banjoko’s life has been a constant exploration of how one can attain strategic peace in a society that provokes the opposite. His unique journey has lead him to find a symmetry between Hip-Hop, chess, and martial arts. 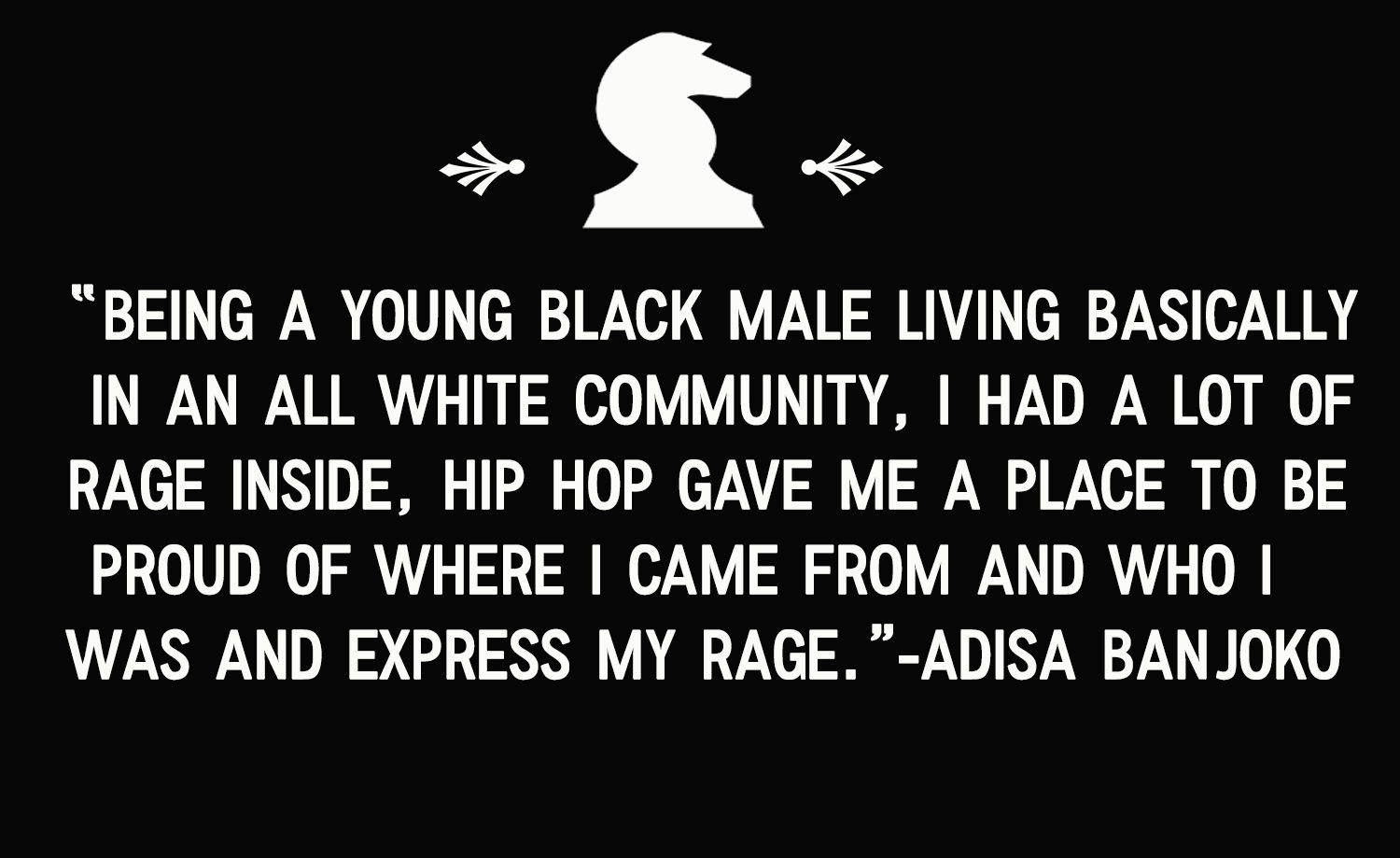 Before there was the strategy on the chessboard, or the tactics on the jiu jitsu mat — there was Banjoko’s foundation in Hip-Hop. This tool of Hip-Hop is how he found freedom in this world as a young black man. He says, “Being a young black male living basically in an all white community, I had a lot of rage inside, Hip-Hop gave me a place to be proud of where I came from and who I was and express my rage.”

Being inspired by an Easy-E Album, he did something no 17 year old had done, he called Easy-E, asked for an interview, and got it. The rest is history. He became one of the first west coast writers of the Source and through his writings, found many metaphors of Hip-Hop and the game of chess, a game which he played since the age of four. Seeing how a lot of MC’s would make references about connections of the game of chess and Hip-Hop, he began to examine his own life’s walk. He reflects, “I was always looking for tools that connected all people of the world and give them dignity, these two were the first I started to see that did that.” 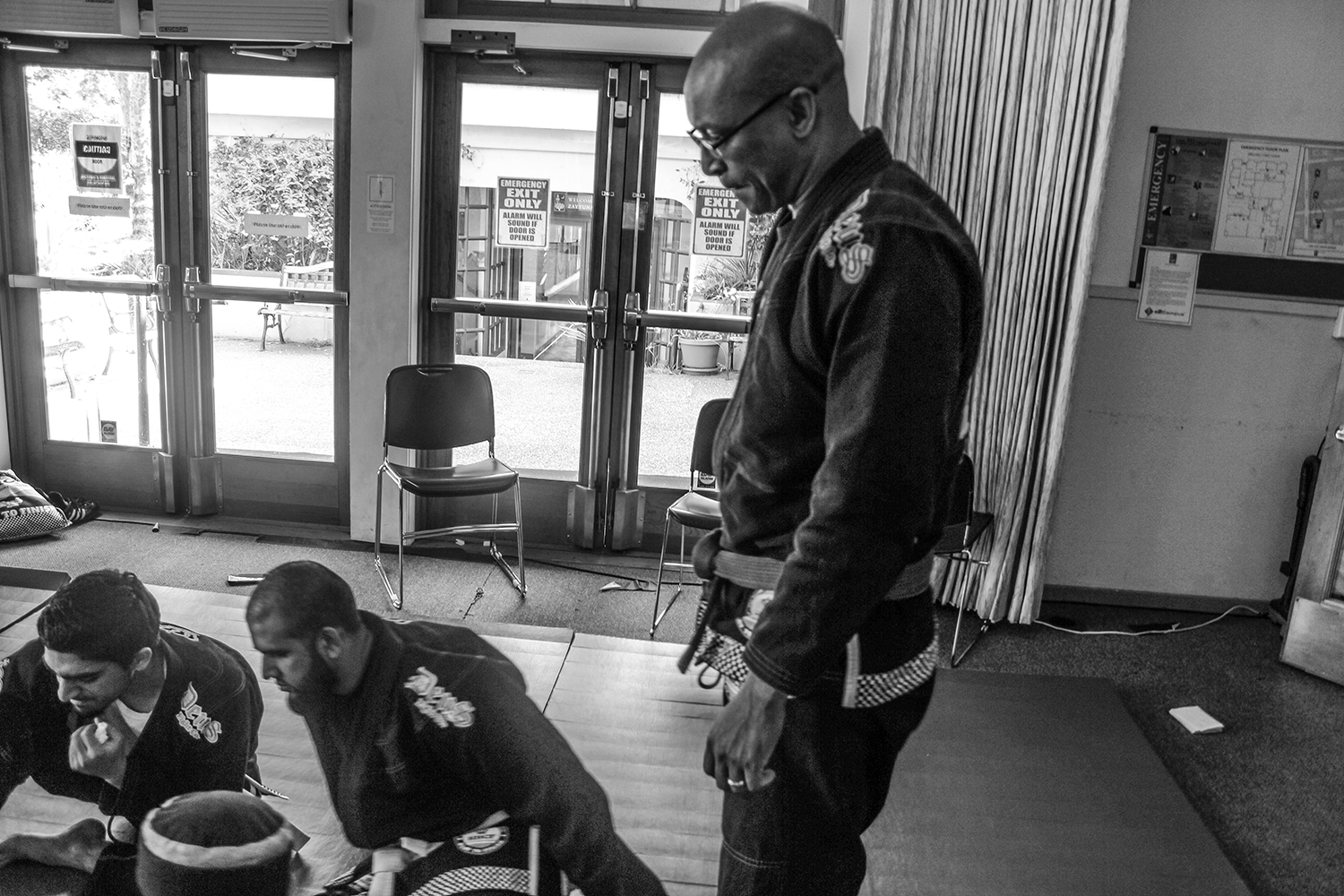 With these parallels he has discovered “they both present the real you,” either in battling or tension that Hip-Hop brings to the larger context of society, or the battlefield that is chess. Both are strategically similar, he says, in that in chess and the streets each move you make must be thought out precisely or it could cost you.

In 1995, stepping away from his first passion for a moment, Banjoko began a family. Around 2000 is when he decided to learn an alternative way to protect his family besides owning a gun. Gracie Brazilian Jiu Jitsu became the alternative that spoke to him. In 2006, he created the nonprofit Hip-Hop Chess Federation. The vision statement of his internationally recognized organization called Hip-Hop Chess Federation (HHCF) reads that the organization, “Fuses logic and the arts to unite minds and hearts.” Through HHCF he teaches youth and adults chess and jiu jitsu classes at their facility in Fremont.

After years of developing his united practice, he received a call from Imam Dawood Yasin of Zaytuna College to be offered an opportunity to teach his vision of interwoven strategies of peace.

His course is called “Chess & Jiu-Jitsu” at Zaytuna College in Berkeley, California which is the first Muslim liberal arts college in the United States. The course is based on his life’s work, blending these universal tools of chess, martial arts, and Hip-Hop. 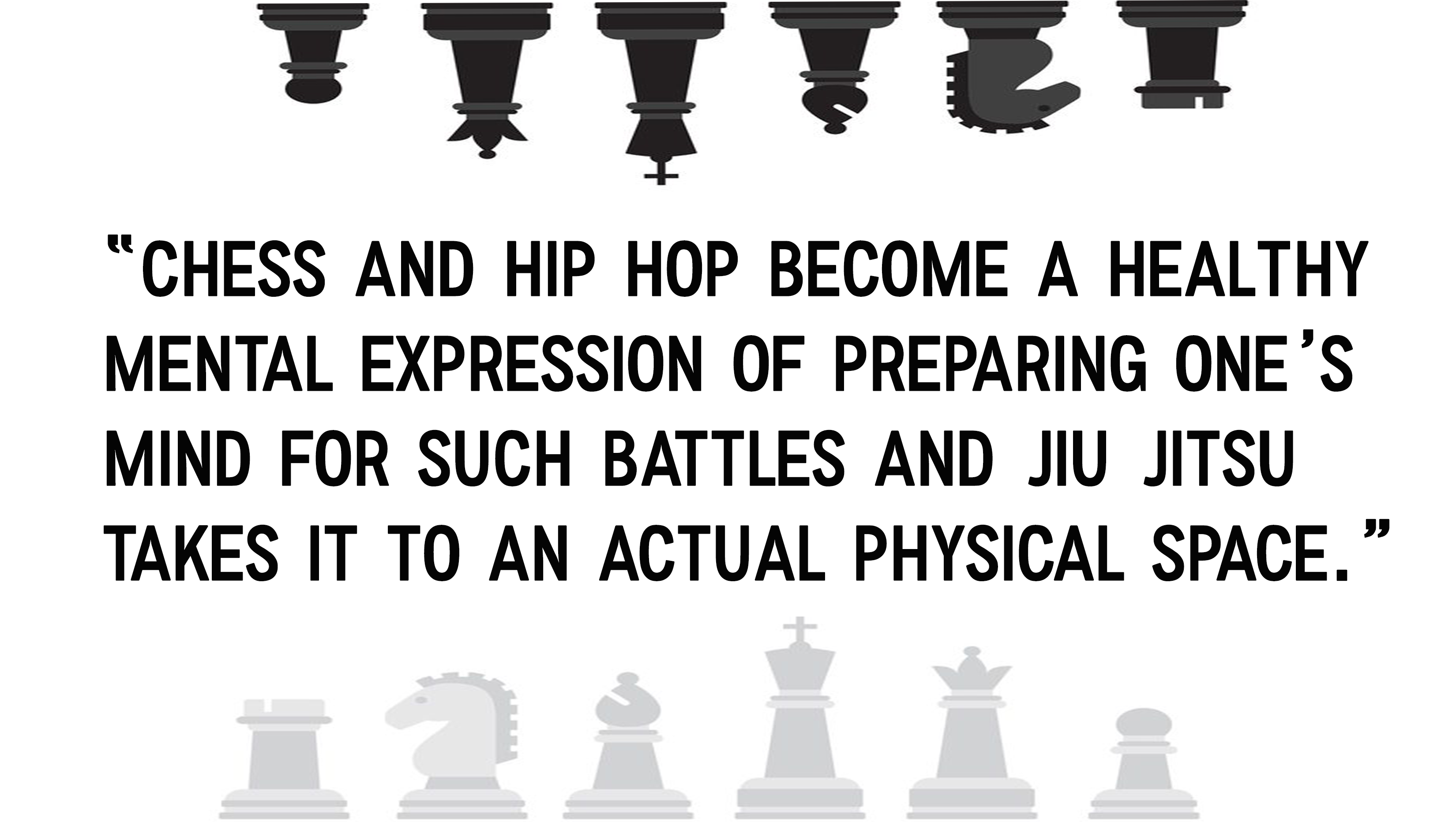 Off the BART in Berkeley, Zatunya College is a unique pause from the chaotic norm. It began in 1996 as Zaytuna Institute in Hayward, California, co-founded by Hamza Yusuf and Hesham Alalusi. A very quiet campus, I met a few students that were dressed in black and silver Hip-Hop Chess Federation branded martial arts uniforms, known as a gi (in the tradition of the Raiders). It is called the Oakland gi and it was designed by Christian philanthropic martial arts company called DeusFight. The art of jiu jitsu has united these organizations in the quest to use martial arts as a platform for peace. Proceeds from sales of the Oakland gi help Banjoko’s non-profit Hip-Hop Chess Federation. The class is a racially diverse mix of students that ranged from various middle eastern and South Asian ethnicities. After a very calm and polite student introduction they moved to the blue floor mat Dojo/classroom in the back of the college. Banjoko’s class lecture was about the chess board, various strategic breakdowns of the game, predictions of the outcomes of moves and rules that govern each piece. He analyzes each piece historically to represent various stratospheres of life.

The students are heavily engaged in the lecture, each on the edge of their seats looking to hear just a little more. He goes on to say the main piece in the game of chess is the Queen. The Queen piece can do whatever she wants to on the board and has more power than any other piece. According to Banjoko, many scholars speculate that because that particular chess piece was introduced as women in medieval Europe began to rise in social-political spaces the queen piece emerged and grew in power. He takes the teaching beyond the parameters of the game, and says how in each three tools of his class — chess, Hip-Hop, martial arts — to survive and ultimately thrive one has to sacrifice much like the Queen does in chess. He asks the class, “What is your queen sacrifice in life?” In other words what are you doing in order to be the best in your life and what moves are you thinking about making to accomplish that in relation to what the Queen of your life is? 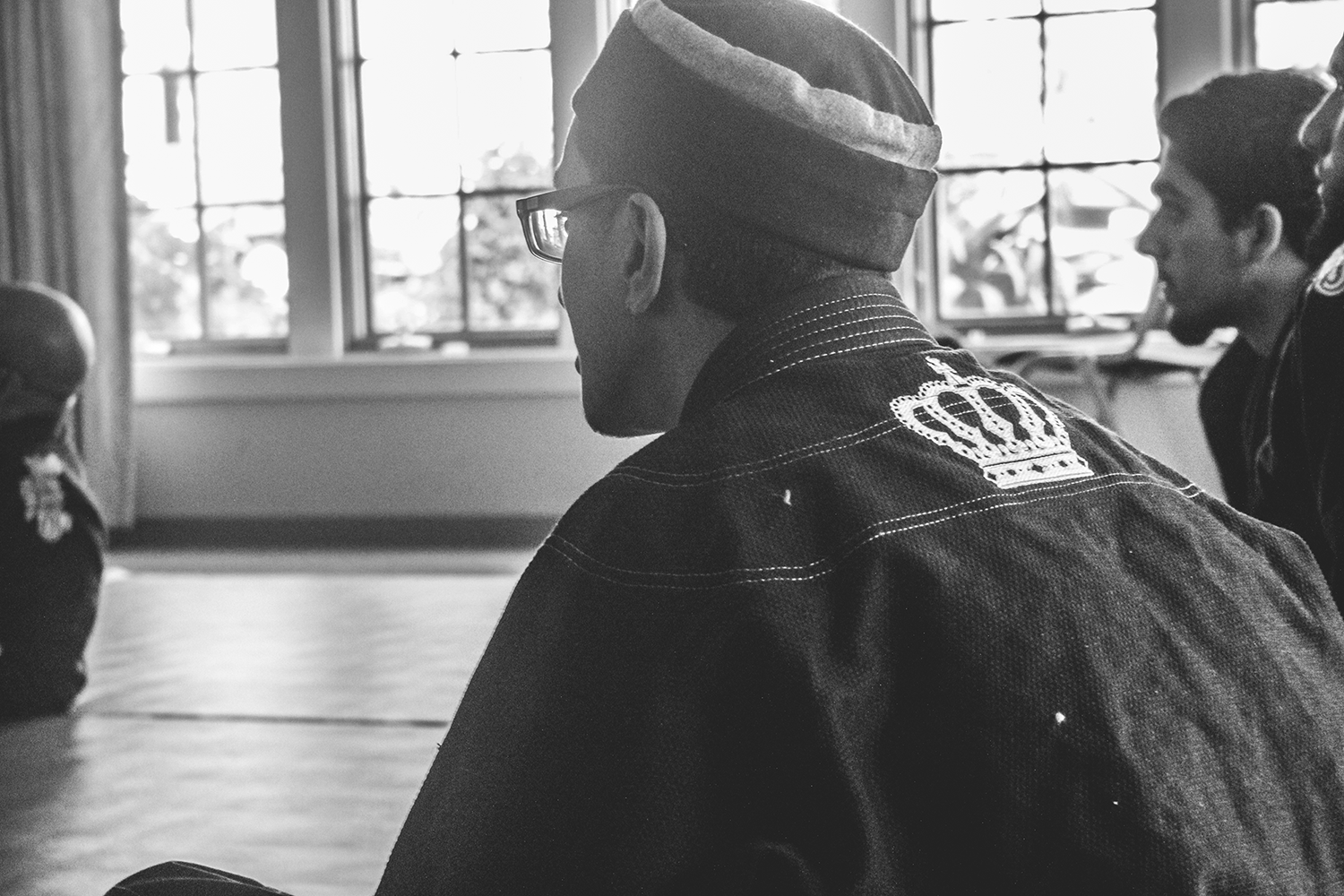 This class represents the unique channel that has been Adisa Banjoko life’s purpose. The wisdom these students are receiving becomes the counter to the culture they will step back into, one where people in life and the streets are always looking to judge, gossip, slander or hurt. These tools give an individual the ability to quickly assess situations and respond effectively with nonviolent approaches to achieve the desired outcome. Chess and Hip-Hop become a healthy mental expression of preparing one’s mind for such battles and jiu Jitsu takes it to an actual physical space, where every decision can prevent or create fatal flaws.

Banjoko closes his session by sharing how there are so many things that separate people in life, it is vital to find the uniting forces. He believes that these three tools that he shares brings people of all walks of life together. The common denominator of battle strategy and preparation for protection in the presence of actual physical danger in the streets and greater context of life.

I was fortunate to attend this class, and was instantly moved by the interconnectedness of all these tools of strategy. I will forever see these three tools Banjoko fuses as paths to strategic peace.