While deadly manifestations of racism are poppin' off across the country and close to home, a San Jose school's response to a hate crime is an outline in what not to do. August Boeger middle school teacher Hillary McHenry is calling on our entire community to help create a safe school after she was targeted in spring without resolution.

Eighth grade teacher Hillary McHenry found “Fu**ng Nig*** LOL noob” carved into her classroom door on the morning of May 13, 2019. It was around 7am when she usually arrives for work, and only a few students were already on campus.

Employees of August Boeger middle school sanded down and removed the carving before police arrived. McHenry was sent home by administrators, and later found out that she was docked those hours. Before the incident, McHenry had no issues with anyone at the school. “It was a great place to be, I loved going to work, but it has become very unwelcoming. I did not feel safe, supported or comfortable,” she said.

Three days after being sent home she first spoke to an SJPD officer who told her that campus video footage had been deleted. School administrators knew video footage was kept for seven days and did not hand over video surveillance. Police had to seize the hard drive from the school about ten days following the incident and were unsuccessful in finding any recordings from that morning. It is unknown if the person or persons responsible are August Boeger students or not.

Ms. McHenry is the youngest teacher on staff at the middle school, she is the only credentialed Black teacher on campus, and she is new to the school. At 26, McHenry is also a poet determined to get spoken word recognized as a genre of poetry; just a month before the incident she wrote a poem about finally being comfortable in her own skin. Now, this experience has set her back. The lack of transparency regarding the incident, failure to implement practices that address racism and isolating Ms. McHenry like a responsible party has turned her into an advocate. With a new school year about to begin, she is anxious knowing that she will have to carry all of this again.

How did the school respond?

Mount Pleasant Elementary School District Superintendent Mariann Engle posted a letter via the school’s Facebook page about the racial slur the day of the incident. In it she asks the community to take a stand and pledge to “raise our voices and educate our children about racism and the importance of standing up for what we believe in.” About 30 people, mostly district employees saw the post. “To think that Facebook is an appropriate means of communicating something like that is ridiculous,” McHenry remarked.

The following week, members of the local NAACP chapter were brought on for a conference call. San Jose – Silicon Valley NAACP Branch President, Reverend Moore was a mediator in a previous incident involving a student and Superintendent Engel reaches out to him whenever there is a racial issue, says McHenry. Initially McHenry was included in the conversation, but then left out of planning emails for a full school assembly. Later the same week, a new letter was mailed to parents and posted on the school’s Facebook to make parents aware of police presence on campus. “Seeing that the letter went out without my knowledge was re-traumatizing, it was very insensitive,” said McHenry.

That same day, Ms. McHenry was asked to write homeroom lesson plans to address the subject with students. As the victim, she was left asking why? She gave resources to administrators and kindly refused to write the lessons, but her resources weren’t used in the final lesson plans that centered on bullying and kindness. “Call it what it is. We’re not talking about bullying or kindness – we are talking about civil rights,” said McHenry as she recalled the disappointment.

The environment for McHenry became hostile, and she feels marked as a trouble maker for seeking accountability. “I’m losing and I’m not doing anything wrong,” says McHenry.

McHenry filed a grievance stating that the district failed to act in a timely manner and asked for:

Her grievance was denied, meaning that the school district claims they did not discriminate against McHenry in any way. Although workers comp for therapy was approved and she fought to get the pay for the docked hours, the other matters were not addressed.

Patrick Hightower is a long term substitute at the school and has worked at the district for eight years. He recalls a similar incident back in the winter inside the gym and expected a different response from the district. “In my eyes this was a repeat offense. The action on this was too little and way too late from the district in terms of how quickly they are trying to get footage, how fast they are moving and they are aware of that,” he says.

All that adds to the frustration and disappointment that any teacher should have to go through something like this. “She shouldn’t have to bear the burden,” he added.

In contrast, when there is a student fight at school McHenry says students are pulled out of class and talked to until administration gets to the bottom of the incident. In this situation, students weren’t even informed of what happened.

But students do report feeling unsafe on campus. More than 100 letters were written by students about their school environment after the incident and sent to school administration in batches. “Ignore me, but don’t ignore the kids,” says McHenry. 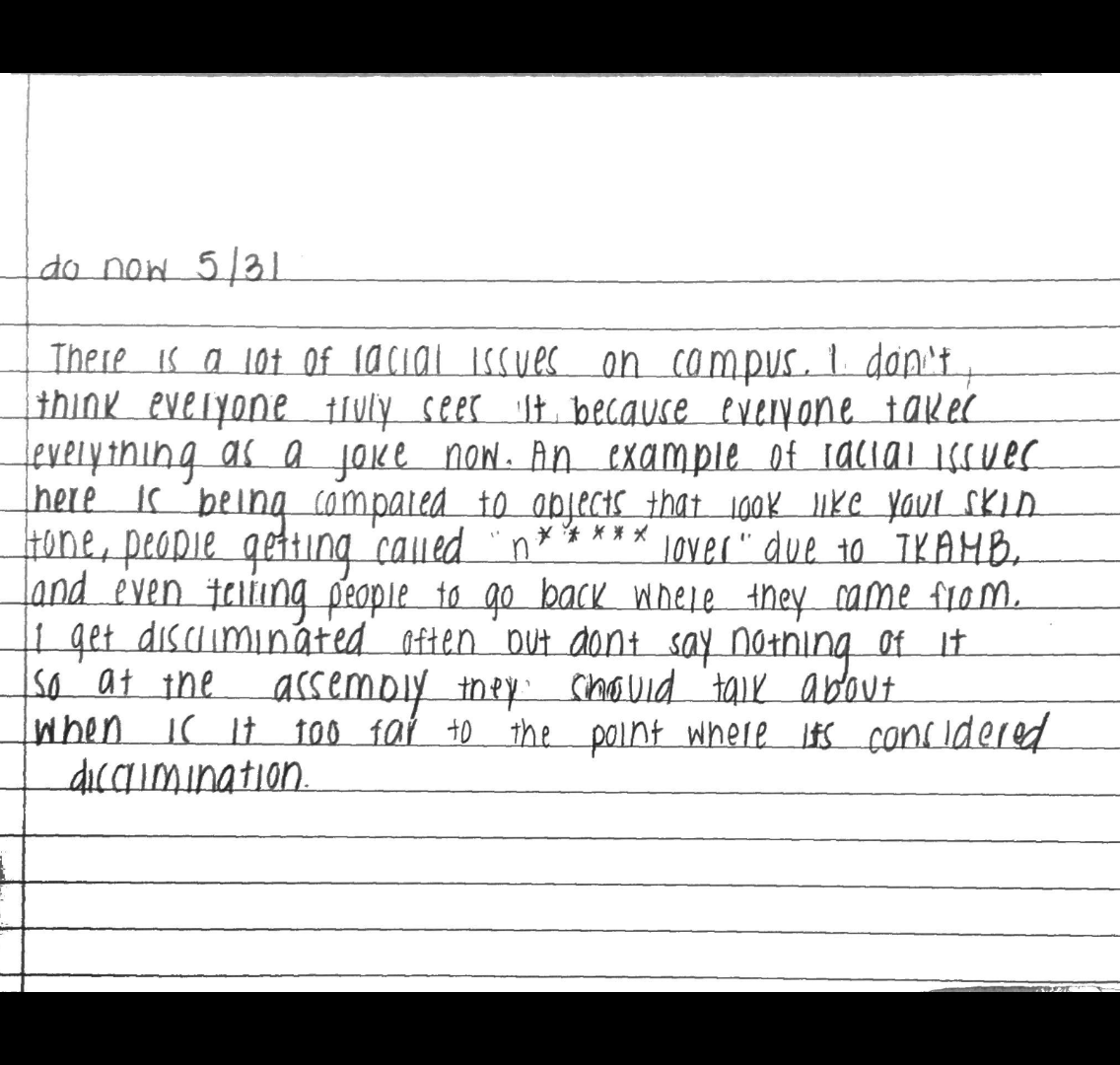 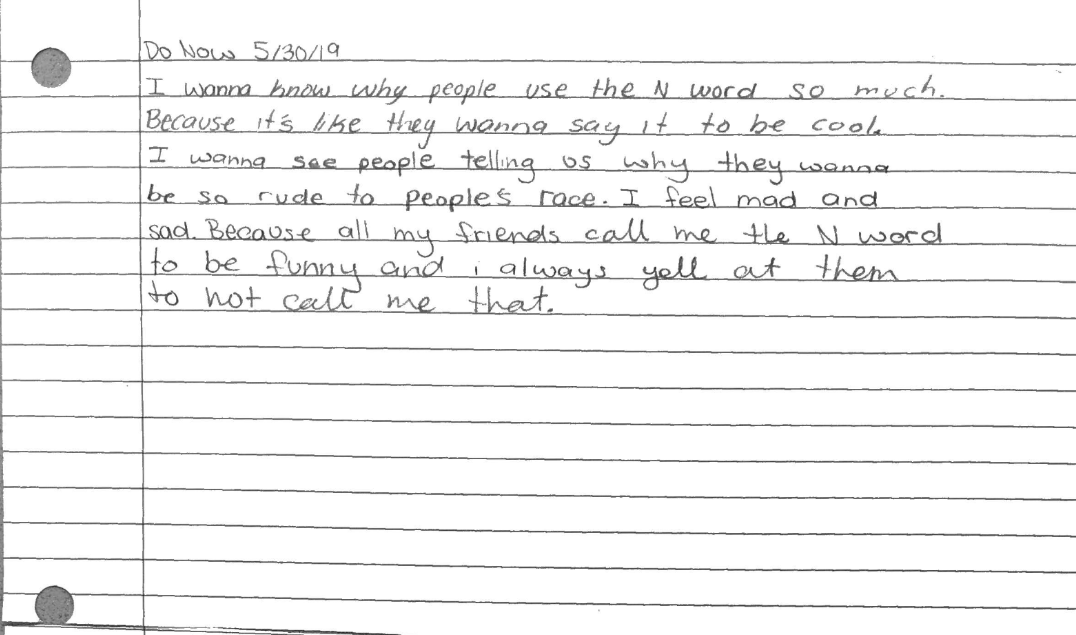 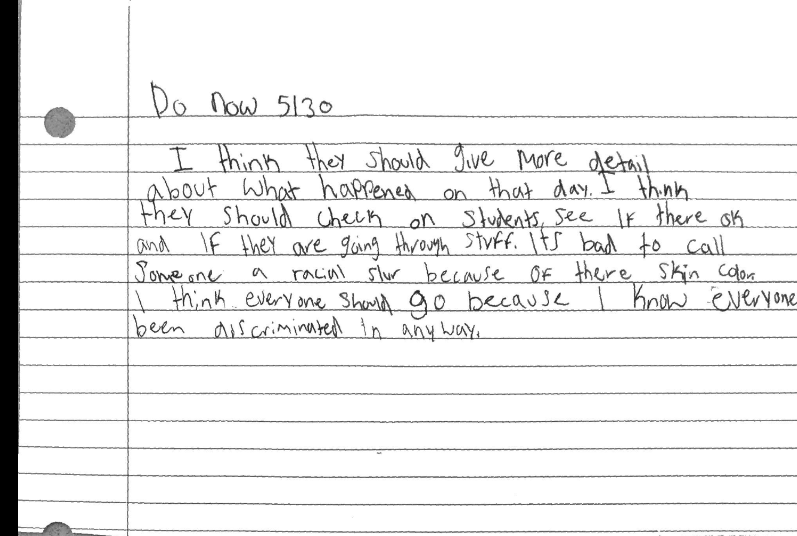 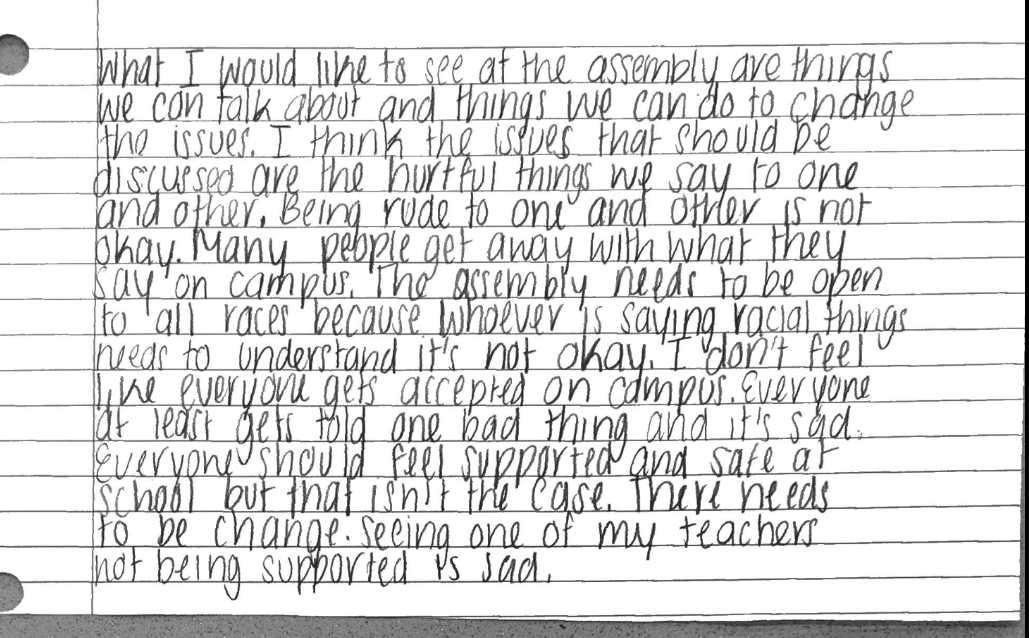 “Thank you for sharing,” was the official response to the letters.

The school assembly took place nearly a month after, and ended up being for the few African American students on campus. Each of their names were called over the school intercom, asking them to go to the office. The students were told there would be an assembly and that they needed to get a signed permission slip from parents, something that seemed intended to have even less student participation, said McHenry.

The day of the assembly, 14 African American students were present for the drumming for healing session while the Superintendent, Principal, Vice Principal, and the head of personnel sat watching, but not participating. “It was unsafe for students. The students held back a lot,” said McHenry.

Both Ms. McHenry and Mr. Hightower helped with the dialogue, asking if the students even knew what they were there for. Most did not. The teachers talked with them about what a hate crime is, they talked about the N word, what it means and why you should be offended when you hear it. When they talked about why the school needs to have a zero tolerance policy, administrators interjected to say there was a zero tolerance policy for the N word. “I’ve never seen it in action because the kids say it in the halls everyday,” said McHenry.

McHenry is working with Reverend Moore on a plan of action for how they’d like to see Black History Month represented at the middle school.

“We don’t really do much for Black History Month, just show some videos during the first period of the day, don’t really dive deep into Black History,” says McHenry. It’s the same thing for other cultural months, there are some videos she says, but no rally, no assembly and we should have it for all the races. “It’s not that big of a priority,” she adds.

The experience has taken a toll on McHenry, who has had to be on top of everything from the investigation to reaching out to outside resources and helping students cope. She’s faced extra stress and discomfort including insensitive comments from colleagues that points to a “lack of training, lack of knowledge of how to deal with this. They don’t know how to respond or deal with Black issues.”

McHenry is feeling like she won’t get a fresh start into the new school year because there has been no resolution. “I felt like I was being treated as an enemy. That’s not the case at all. I want people to do their jobs correctly and to support their teachers,” she states. “They needed to reach out to people and do more than what they did,” she added.

McHenry will request meetings with administrators who have the decision making power to address the denied requests.

Let’s all take up Superintendent Engle’s initial pledge to educate our children about racism and stand up for what we believe in by adding our voices to the call for policy changes to create a safer school environment for all.

The next District Board Meeting will be August 14th. Call the school and voice your concerns, ask them what are you doing to address this? Is my student safe? Especially if your student is African American. “We can’t protect the teachers, how are we supposed to protect the students and create that safe environment?” asks McHenry. 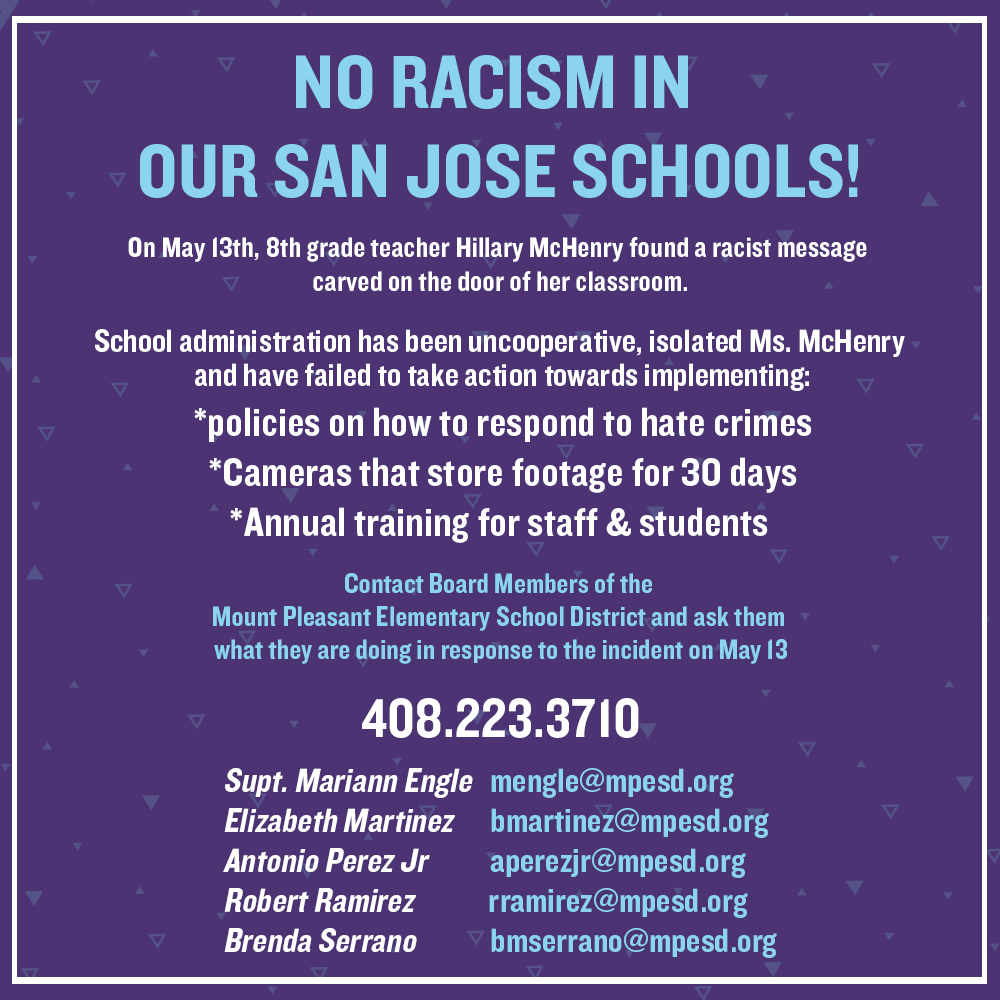