The Freedom of Ms. Alice Johnson and the Fight for the Rest of Our Sisters

Alice Johnson had served over 20 years of a life sentence for a drug offense when she was finally granted her freedom through a clemency. Justine Moore, co-founder of the National Council for Incarcerated and Formerly Incarcerated Women and Girls, writes that Ms. Johnson's freedom should be the first of many other women currently serving life sentences.

June 6, 2018 was yet another day that reminded me of why this work is so important.  I sat on the couch, getting watery eyed, no I was crying, tears of joy, as I saw that Alice Johnson had been released from prison after serving 21 years of a life sentence for a non-violent drug offense.  She ran out of the jail into her family’s arms. When I saw the news, I turned to the other participatory defense trainers I was with and just said, “She’s home, one of the women we starting fighting to get clemency years ago. Alice Johnson is home.”

CNN coverage of the release of Ms. Alice Johnson.

I am the co-founder of The National Council for Incarcerated and Formerly Incarcerated Women and Girls (NCIFIWG). I do this work because I am formerly incarcerated.  I served 16 years in a federal prison.  I know the impact the prison has on a person, along with their family and friends.  When one person goes to prison, so does the family and the community.

The first time I heard Ms. Alice Johnson speak, it was in 2016, when she joined our “Real Women, Real Voices Symposium” through Skype. The event was being held at Yale University, and despite the prison walls, we were able to bring her in to the room. Seeing Alice on the screen made me cry, her story made me cry.  The reality of the unjust system made me cry.

She was the number one out of the top twenty-five on Amy Povah’s Can Do clemency petition candidates. As a result of Ms. Johnson being Skyped in, she was connected to Mic.com, where they created a video that would eventually go viral and catch the eye of Kim Kardashian. Kim was moved by the video and she began to advocate for Ms. Johnson in addition to the many others who had already been advocating for years. After seven months of advocacy, Kim was able to secure a meeting with President Donald Trump to make a plea for Ms. Johnson’s freedom. That meeting would prove to be the final piece of the long journey that spanned over years to free Ms. Alice Johnson. On June 6, 2018, President Trump granted Ms. Johnson clemency and she immediately returned home to her family. 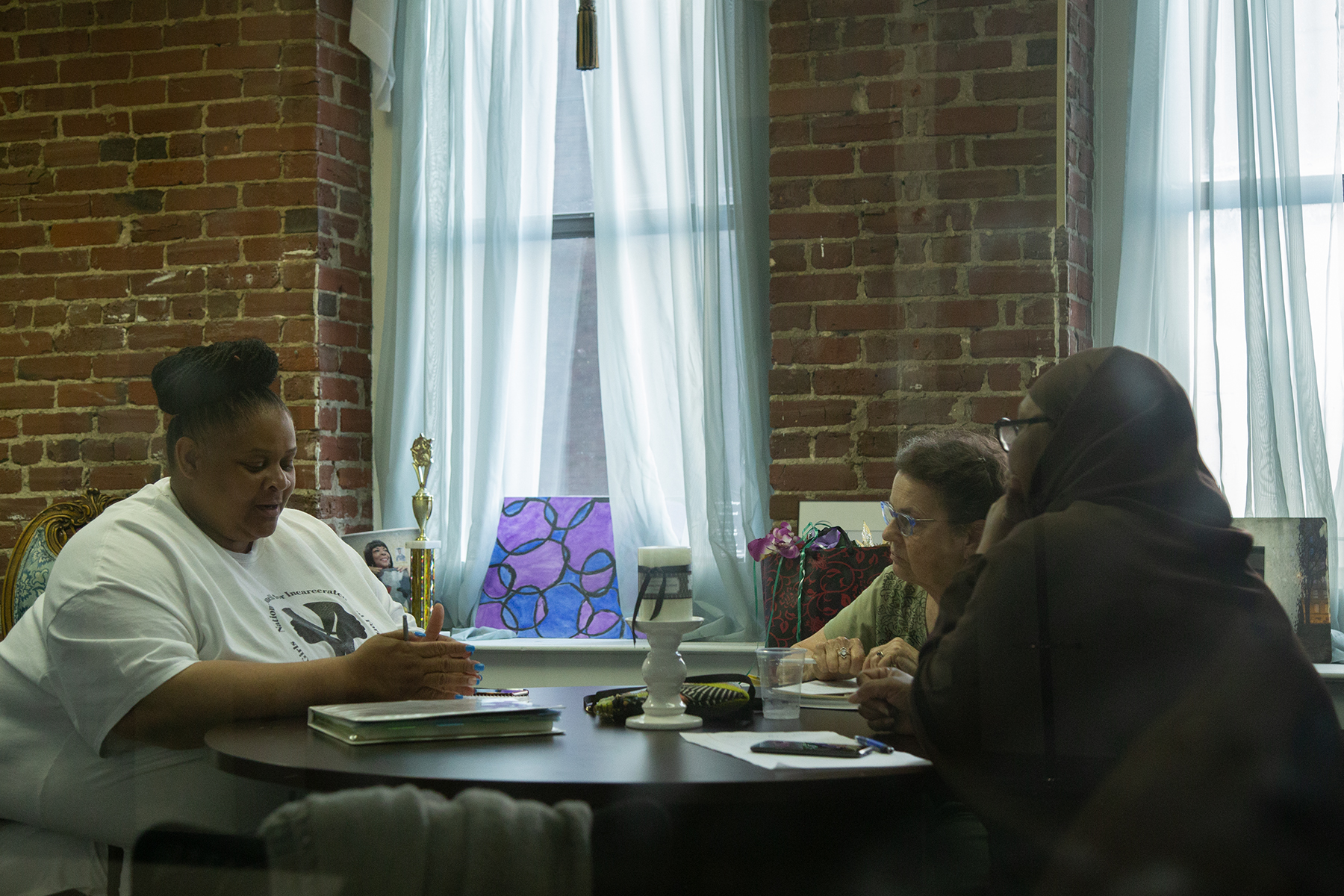 Alice wasn’t the first to join us through video conference from a prison. The first sister I remember being video connected to our conversation was Michelle Miles, who appeared at our first groundbreaking Real Women, Real Voices Symposium at Columbia University. At that time, Michelle was incarcerated at Danbury Federal Prison Camp. She was serving her 19th year of a 30 year sentence. As Michelle told her story, the tears rolled down my face as she brought awareness to the effect that incarceration has on women and girls.  Michelle was the first to be Skyped in from a prison, but she would not be the last. On April 22, 2016, at our next symposium at American University Washington College of Law, Anastasia Schmidt and several other sisters from Indiana State prison were Skyped in. On May 20, 2016 at our symposium at Loyola University College of Law, Tynice Hall, who is currently serving 30 years in the federal system also appeared on our video screens. Our hope is that like Alice Johnson, all of these sisters will be granted the freedom they deserve.

At the Council, these sisters are with us all the time. We carry posters around with their faces, their charge, and sentence. We speak about them everywhere we go. Our goals at the Council is to bring awareness to women and girls, generate support from the communities, organizations, advocates, celebrities, congress, and anyone else who fights for social justice, and prison reform. We want to end mass incarceration and bring our sisters home.

As a co-founding member of the NCIFIWG and the Director of Participatory Defense for the Council, I believe we can end mass incarceration. I know it will not happen overnight, however, I believe we have the tools to begin.

My work at the Council is to help families, communities, and individuals that are facing charges, fighting for an appeal, clemency, or a parole hearing through participatory defense. We aim to impact the outcome of cases and transform the landscape of power in the court system. This is just one step of many that will help us in getting to our final goal. Our sister Alice Johnson is home, and please believe we will keep fighting for freedom, until we end mass incarceration.

Related Media:
SPLITTING UP KIDS FROM THEIR PARENTS IS NOTHING NEW IN THIS COUNTRY
Sajid A. Khan - SV De-Bug - June 20, 2018 - 3 minute read

Justine Moore is the co-founder of the National Council of Incarcerated and Formerly Incarcerated Women and Girls, and the Council's National Participatory Defense Coordinator.