A recap of the Community Mural Bike Ride organized by Carlos Velazquez with Juan Carlos Araujo of Empire Seven Studios. A bike ride appreciating more than 25 murals in San Jose’s most diverse neighborhoods that often don't get any shine.

Wanna Take A Ride With Me?

The Community Mural Bike ride on Saturday March 4th brought together three things that have had a profound effect on my life: art, bicycles, and the people and neighborhoods of San José.

Nearly 200 gente got on their bikes to join Juan Carlos of Empire Seven Studios, the familia from Silicon Valley De-Bug, and myself on a ride exploring more than 28 murals throughout the city of San José. In short, it was a tremendous success, and I’m still glowing from the positive vibes and community spirit felt that day. 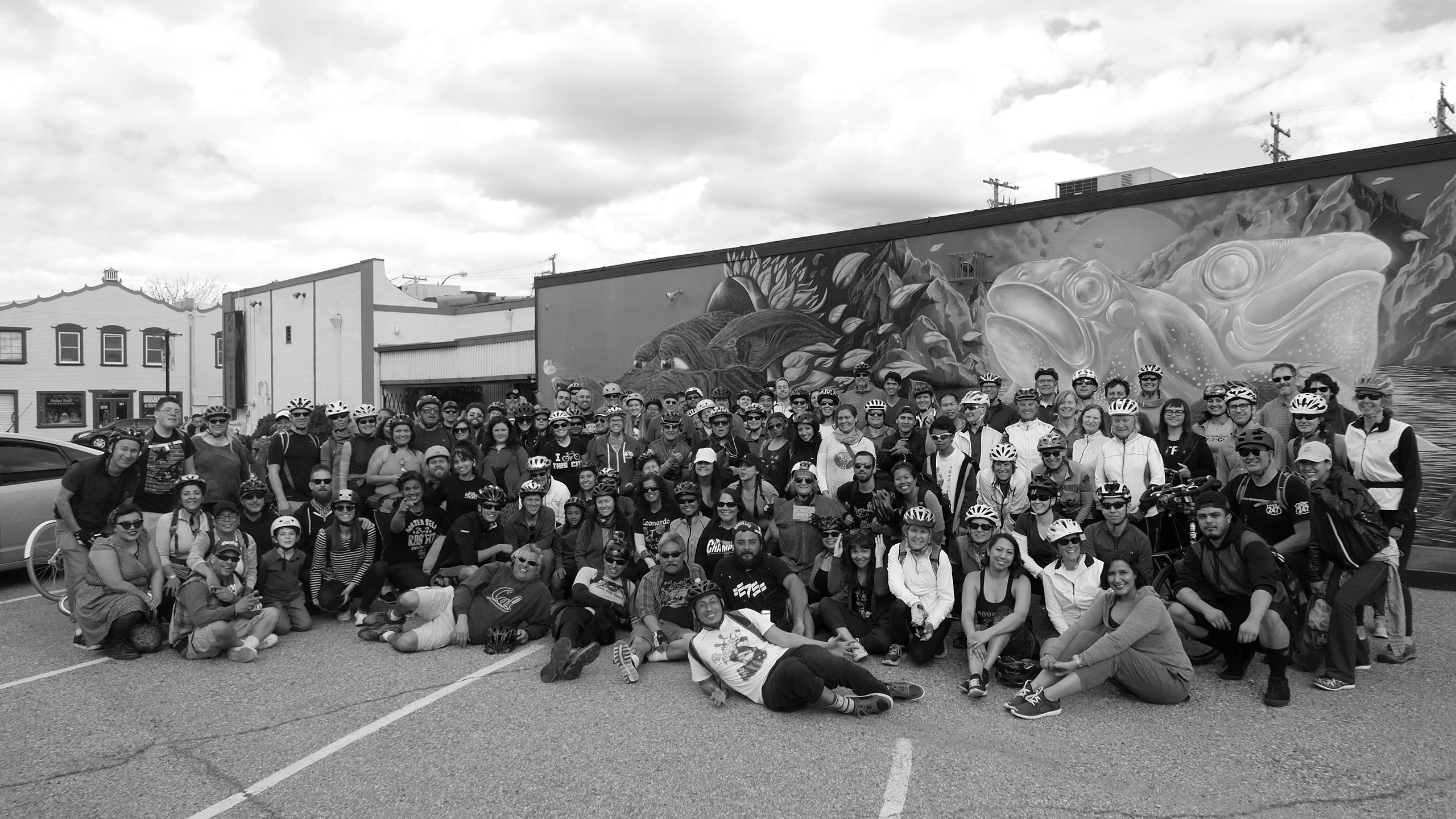 Thanks to San José’s community of Chicano artists, organizers, and [email protected], I’ve seen how art can help my family, community, and myself to heal in many ways through sharing our stories and experiences (shout out Teatro Visión and MALI fams). The murals of this city were a great way to bring art into the ride, offering us free and public displays of stories and experiences.

Bicycling has had a big impact on my life since moving back to San José two years ago. Working with Silicon Valley Bicycle Coalition, I went from being scared as hell to ride my bike on the streets (next to cars, hijoles!), to having the bicycle become my primary mode of transportation. I love the sights and sounds I can only experience while on my bikla, and I hope this ride encourages folks to ride more often. 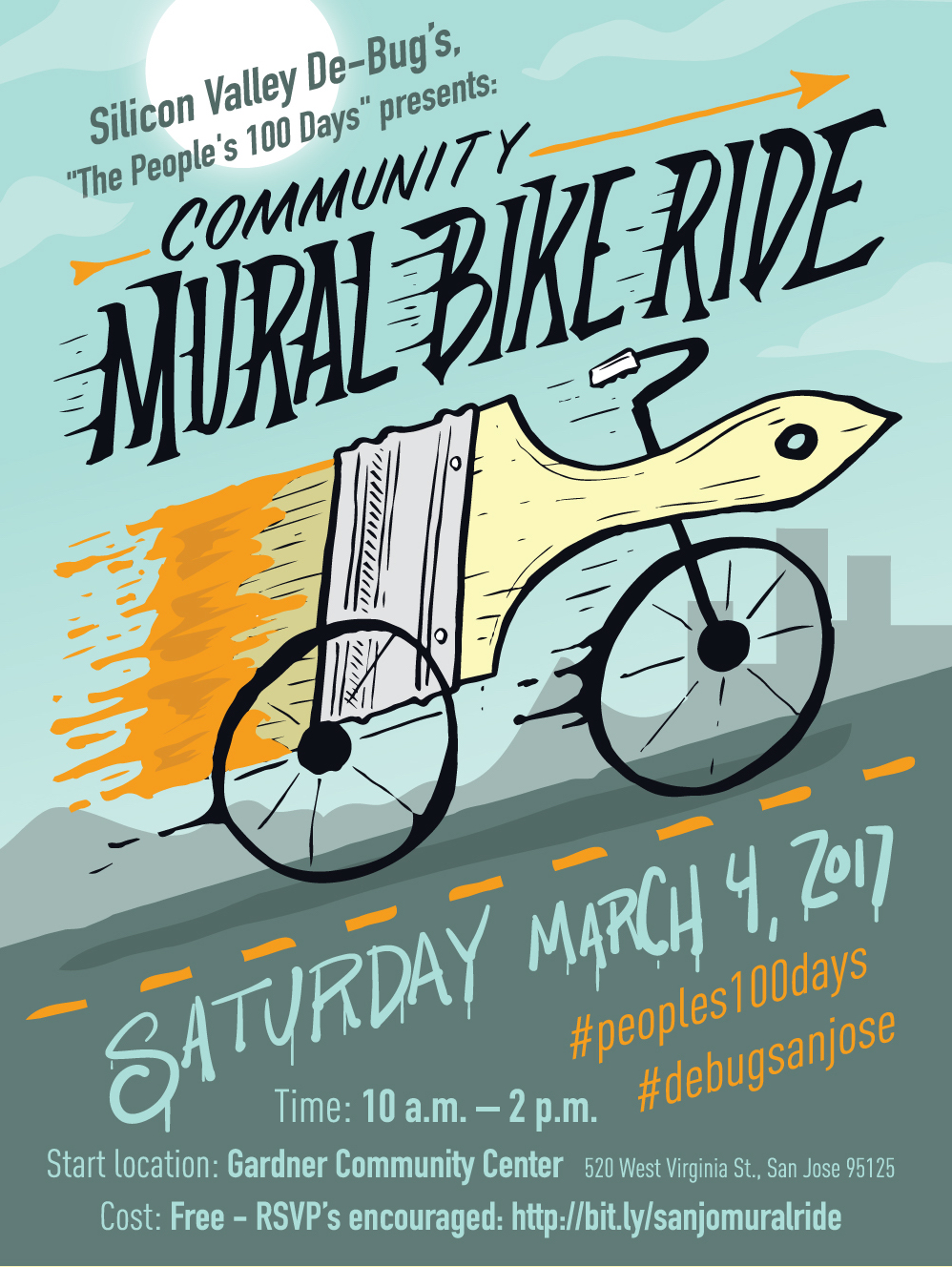 And, I LOVE San José. I love its history, the people, and neighborhoods. Name a street, strip mall, or freeway in this valley of the heart’s delight, and I can share with you a story, aye. For those of us who grew up here, these neighborhoods are full of familia and stories, and I wanted to evoke them, to make them palpable for people on the ride.

Silicon Valley De-Bug does this every damn day, and their #Peoples100Days series inspired me to humbly contribute through this ride. I reached out to Juan Carlos and Jennifer of Empire Seven Studios, [email protected] who are responsible for many of Sanjo’s newest murals, to enlist their help in organizing and leading the ride with me. It was fun planning the ride with De-Bug and Empire Seven, and with the help of many in the Sanjo bicycling and arts community: Silicon Valley Bicycle Coalition, San Jose Bike Party, Ride ESSJ, MACLA, School of Arts and Culture, Souleros Ball, the Gardner Community Center, and of course the artists behind the murals. 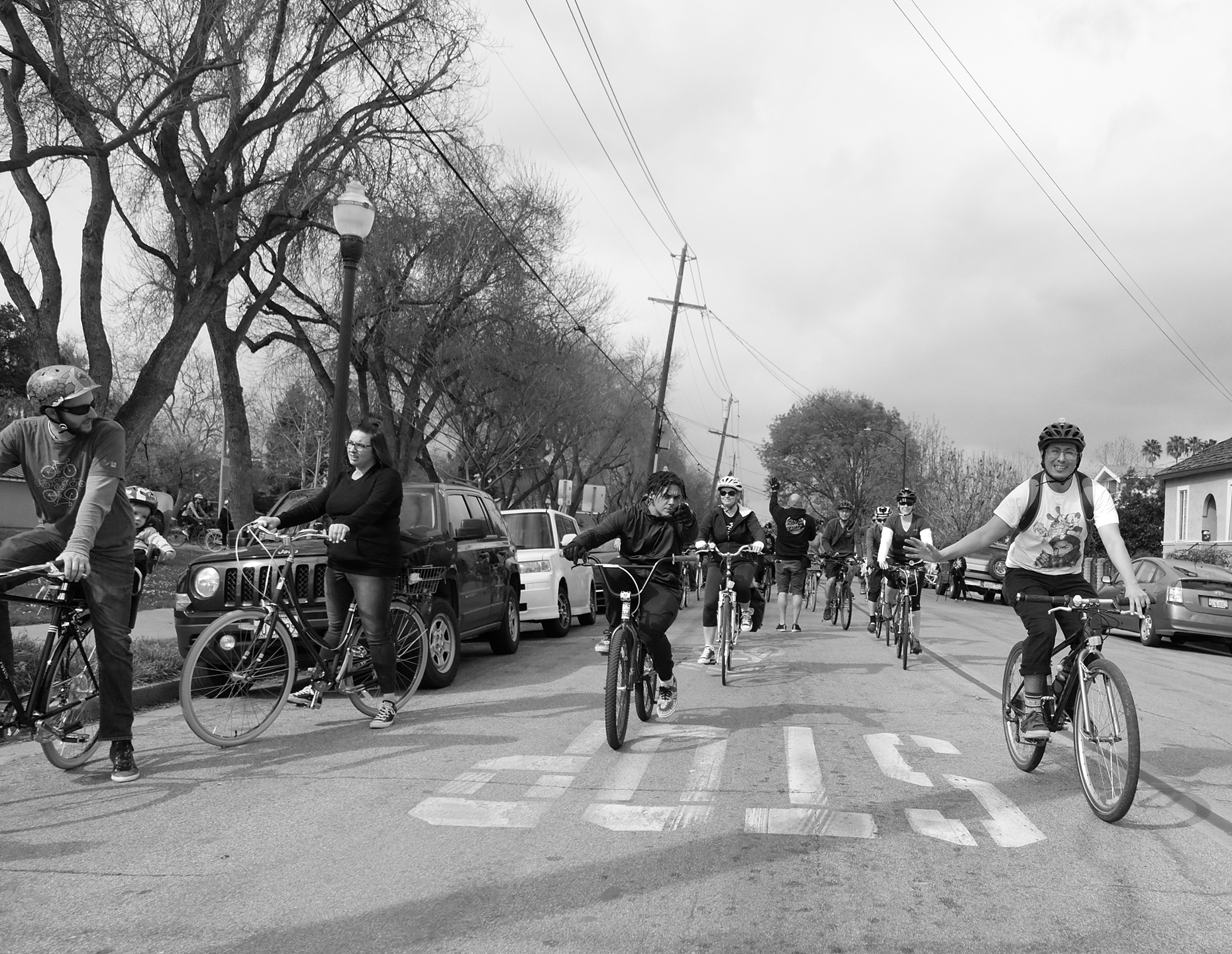 My Pops taught me to take good care of what we have, even if it isn’t much. As San José transforms to a more urban city, I am reminded of this. City leaders and urban planners want to attract creatives. A vibrant downtown. Beautiful, inspiring places and spaces. An identity. I want these too. But as my Pops taught me, I feel we should take good care of what we have now. I wouldn’t want to lose what we have at the expense of our new wants. This ride was my way of sharing the beauty I see every day in San José, what I take pride in, what I want to take good care of. I know you’ll see it too, you just need to go out and explore. You wanna go on a bike ride with me?

**We still have posters! Stop by SV De-Bug and pick up a free poster while supplies last!