We Shut Down The Jail: San Jose Abolition Photo Essay

In December 2020, the Santa Clara County Board of Supervisors unanimously decided to move away from incarceration and shut down the construction of the new jail. This win didn’t come easy -- it took years of struggle led by individuals inside and their loved ones outside who organized and came together to insist on a vision of freedom that our entire community can believe in. These photos document that struggle - and as an act of reimagining, we hung these photos on the fence surrounding the demolition site of Main Jail South. Main Jail South was a place of darkness, pain, and oppression, and it was the unrelenting power of community that made sure no carceral institution will ever tear families apart ever again. (Photos by Charisse Domingo, Daniel Zapien, Fernando Perez) 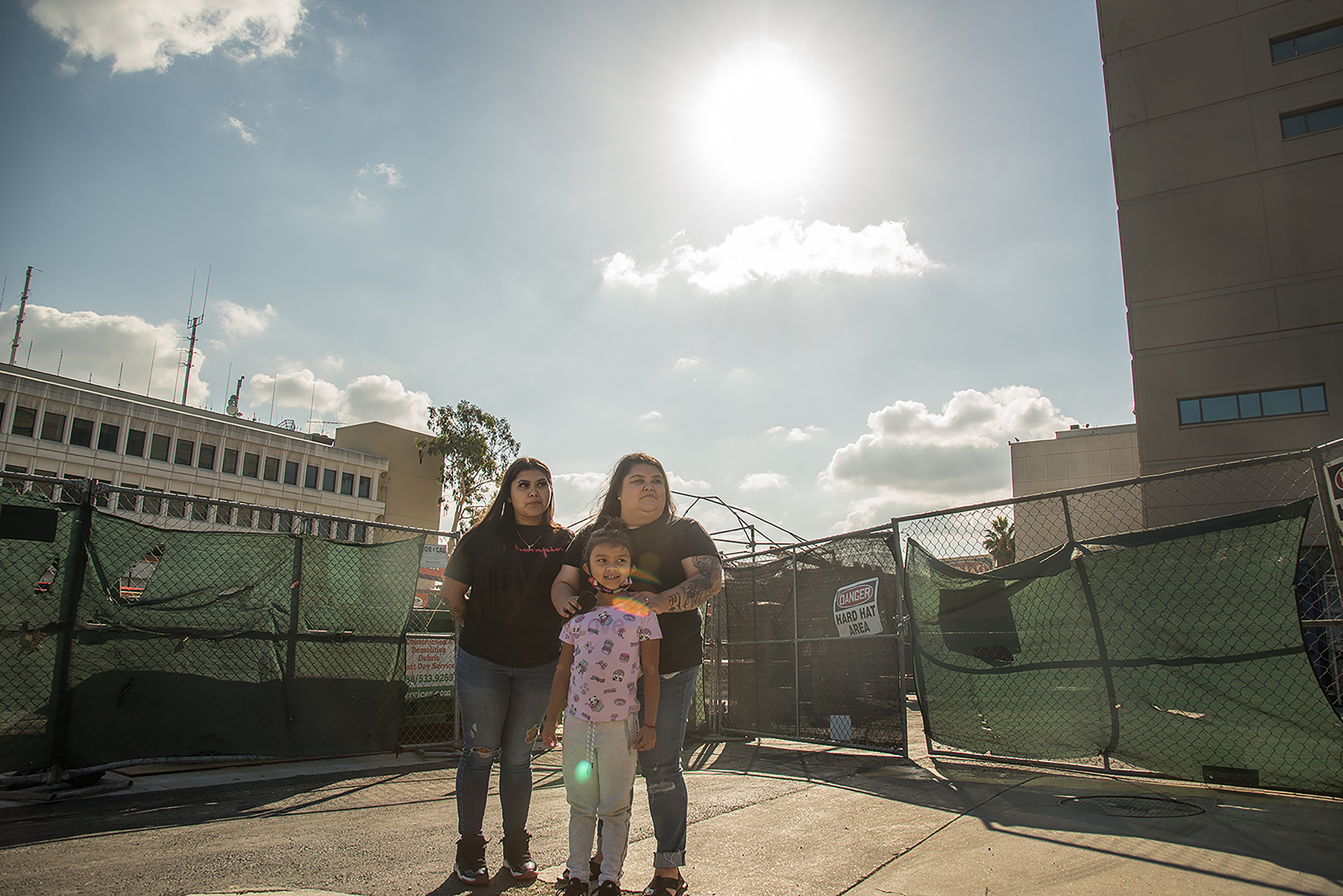 Little Jovina took her first steps as a baby inside the Santa Clara County Main Jail south, visiting her father Joe who was detained pretrial for years. To see the site now demolished and that the County has moved away from incarceration and towards community resources brings tears to Benee’s eyes - because of the years of struggle it took to get the voices of those incarcerated heard from within the walls of the jail. 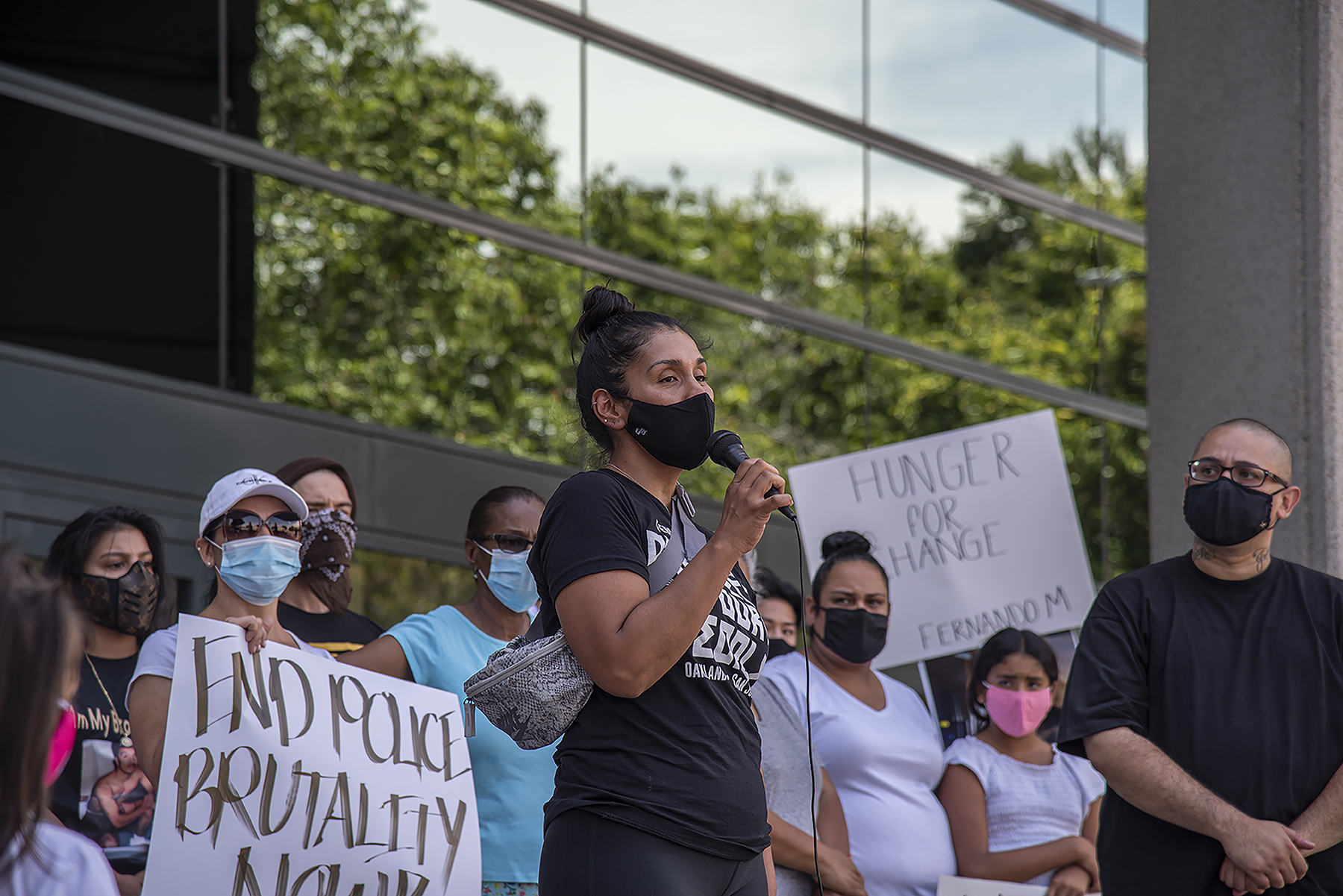 During the height of the COVID-19 pandemic, individuals inside Santa Clara County jail called for a hunger strike in support of the adoption of the Protect Your People budget analysis, protections from COVID-19, and an end to racist gang enhancements and prosecution.  In solidarity,family members like Melissa also fasted with their loved ones, and held a rally outside the Main Jail.  These collective efforts helped shape the atmosphere that led the Board to support the demands of the Protect Your People budget - an analysis to defund the criminal punishment system and direct resources to community programs -- including, the shutdown of the new jail. 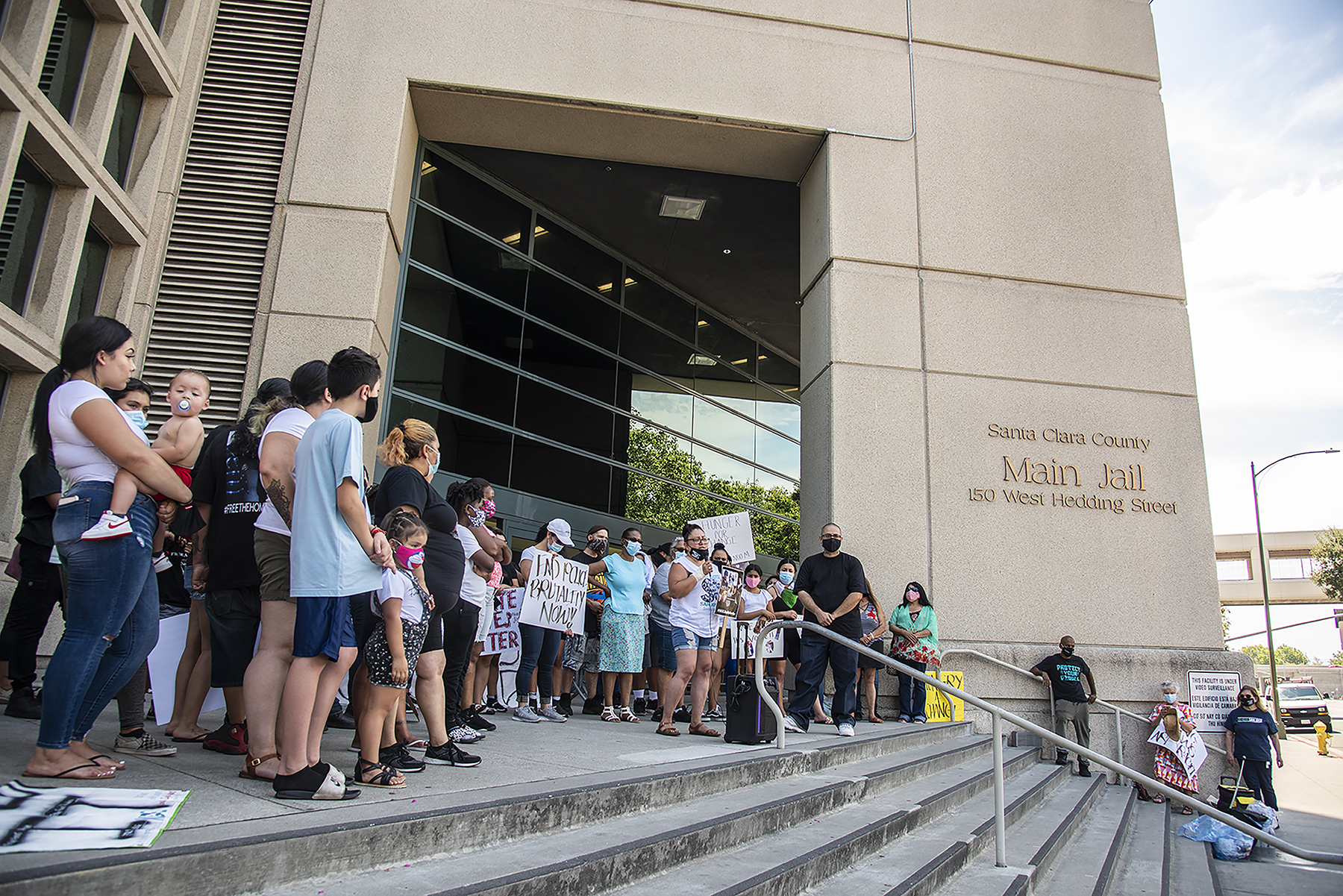 Rosie Chavez lost her nephew Jacob Dominguez when San Jose police officer Mike Piña shot and killed him in September 2017. Jacob was profiled for his previous history, even though he had since turned his life around and was dedicated to raising his family.  Rosie knows all too well the intersections of police violence, criminalization of our neighborhoods, and incarceration. She now works as the Community Release Project Coordinator with De-Bug -- freeing the “Jacobs” from the system. 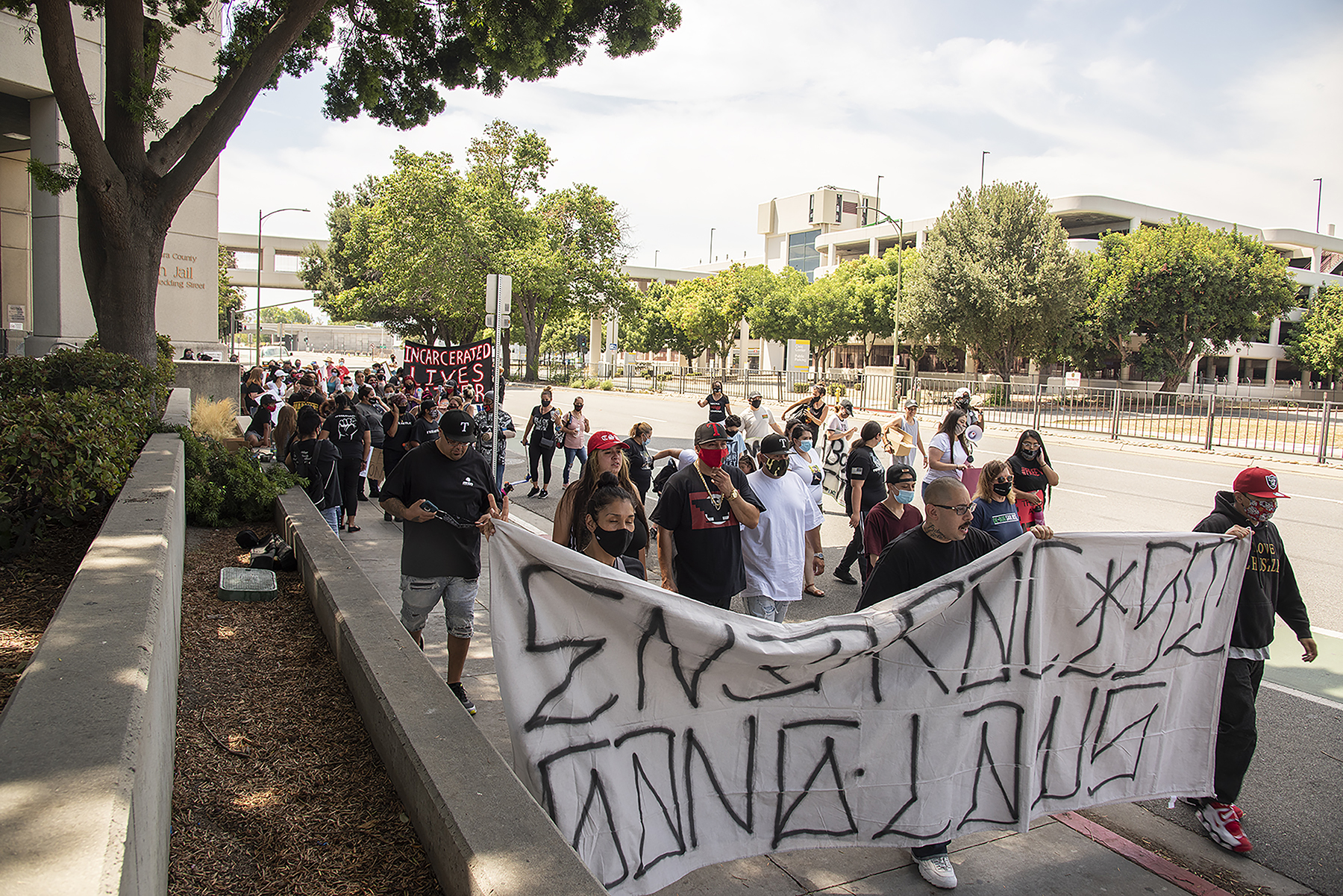 Families of loved ones inside Santa Clara County Jails and their supporting communities rally in support of the individuals inside who went on a hunger strike in support of the adoption of the Protect Your People budget analysis, protections from COVID-19, and an end to racist gang enhancements and prosecution.  Since 2015, Prisoners United Silicon Valley has held multiple hunger strikes - some lasting 2 weeks -- to push for humane treatment inside the jails. 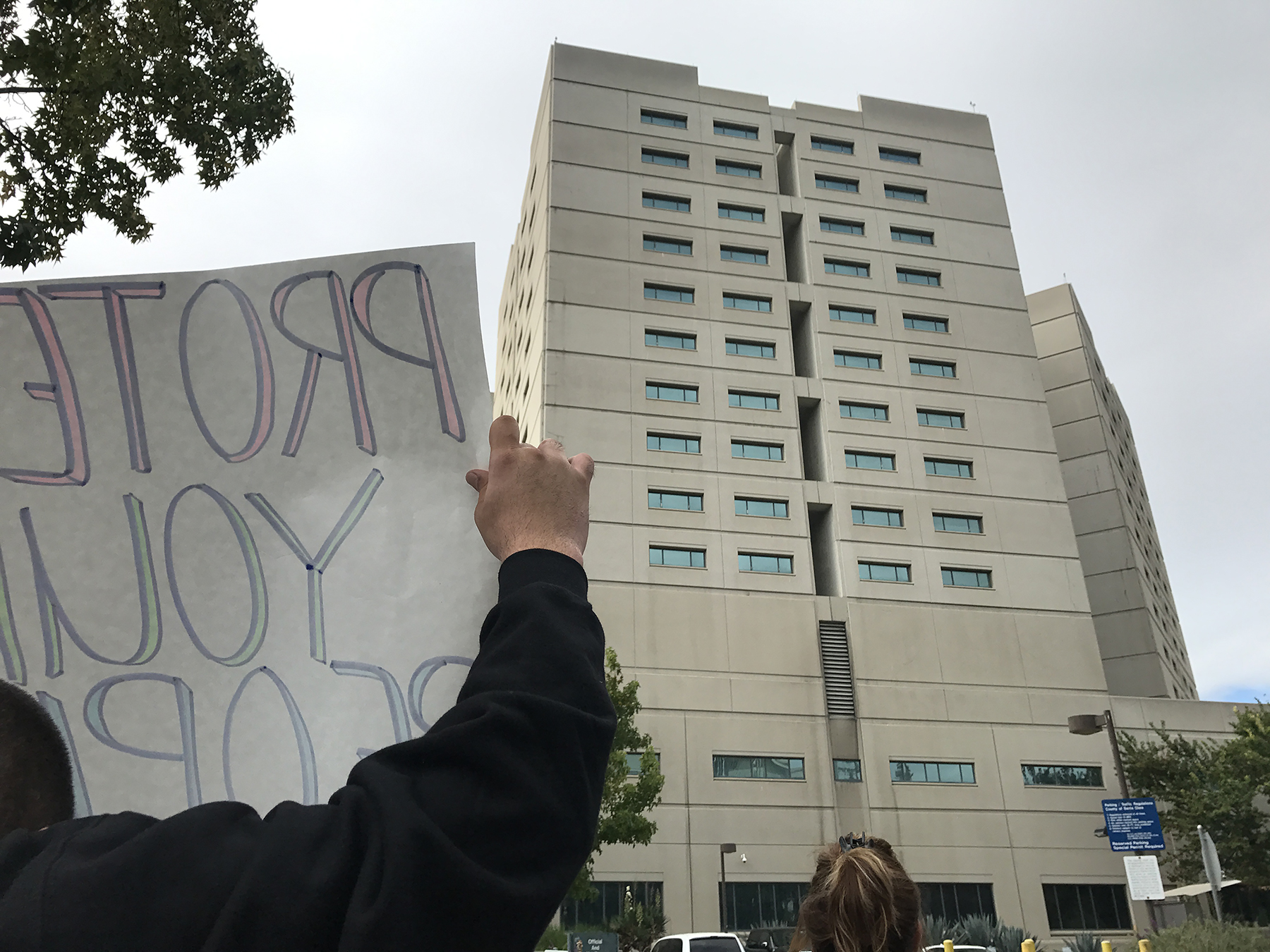 This is the corner of the street where families would stand outside with signs looking up, and the men inside would bang their windows looking down - and in protest after protest, there would be a call and response in unison.  Immediately after protests, the men inside would call their loved ones. Priscilla, whose brother has been inside juvenile hall and the jail, would always look forward to those calls where her brother’s voice was some of the liveliest and brightest that she’d hear. 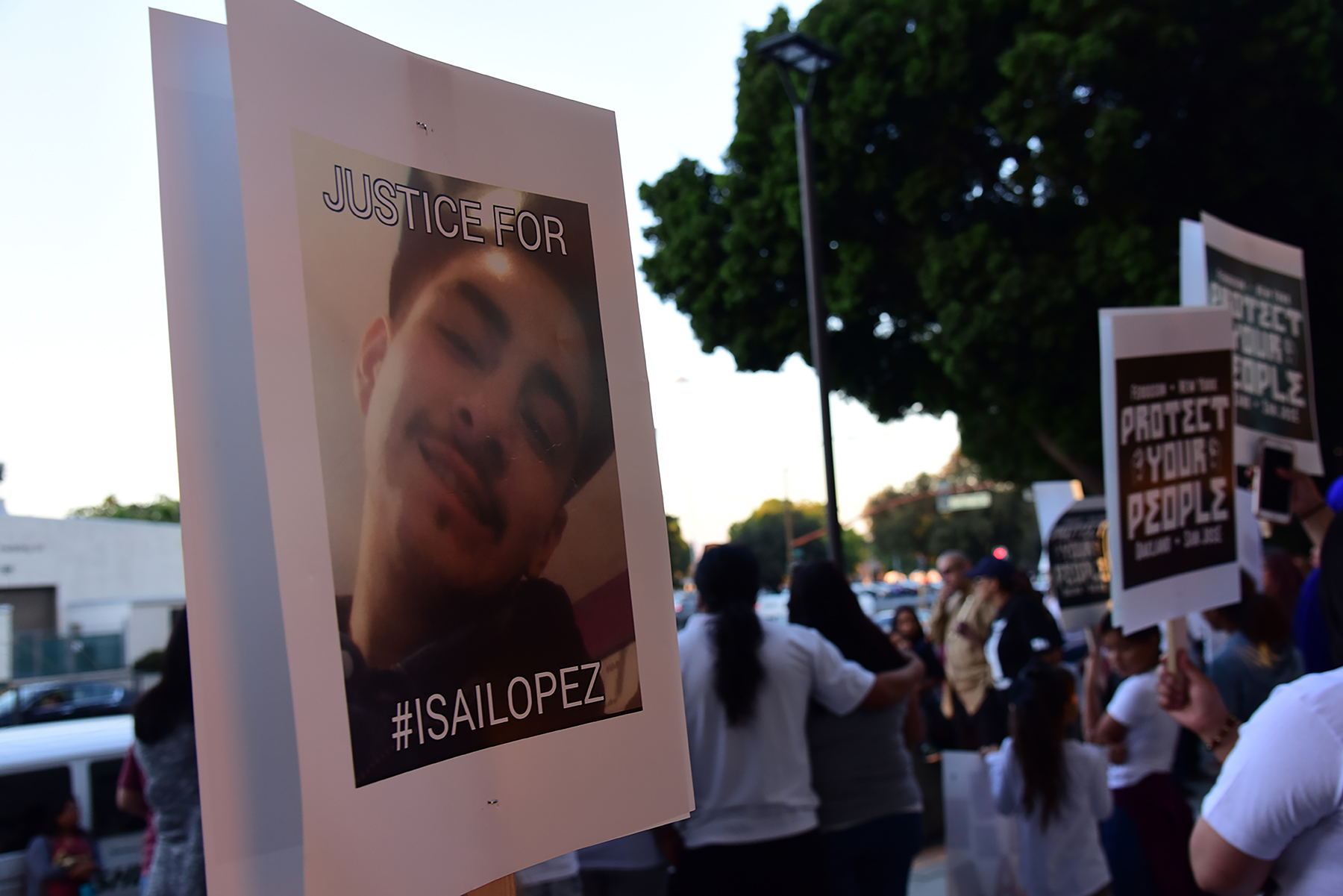 Isai Lopez was only 23 years old when he was found dead inside his cell in 2018. Officials said he committed suicide, but his family and community say otherwise. He was His family organized a vigil attended by over 100 people in front of the jail, bringing attention to Isai’s death and shining a light on the isolating and inhumane conditions of the jail, to demand answers for their loved one’s death. 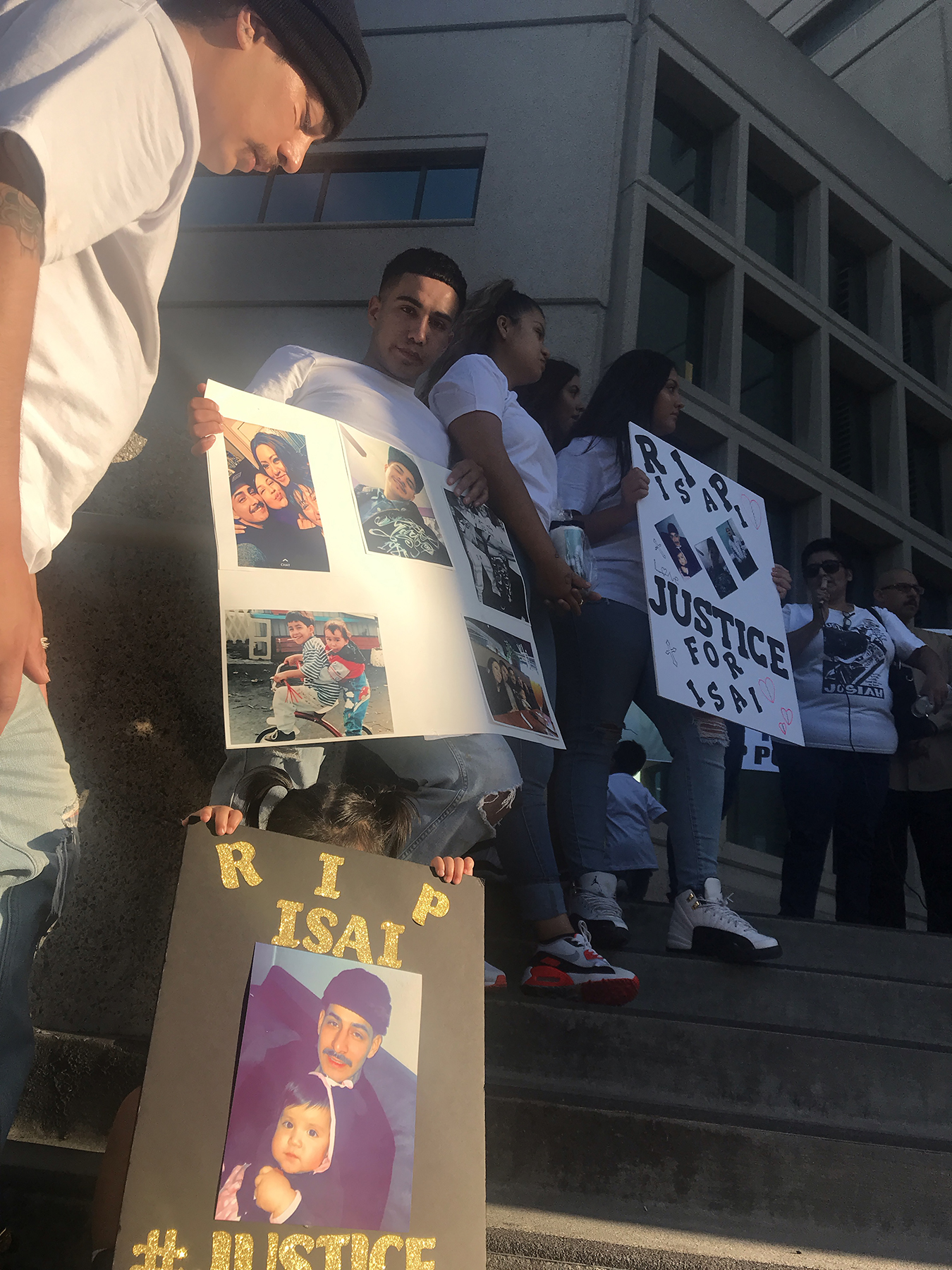 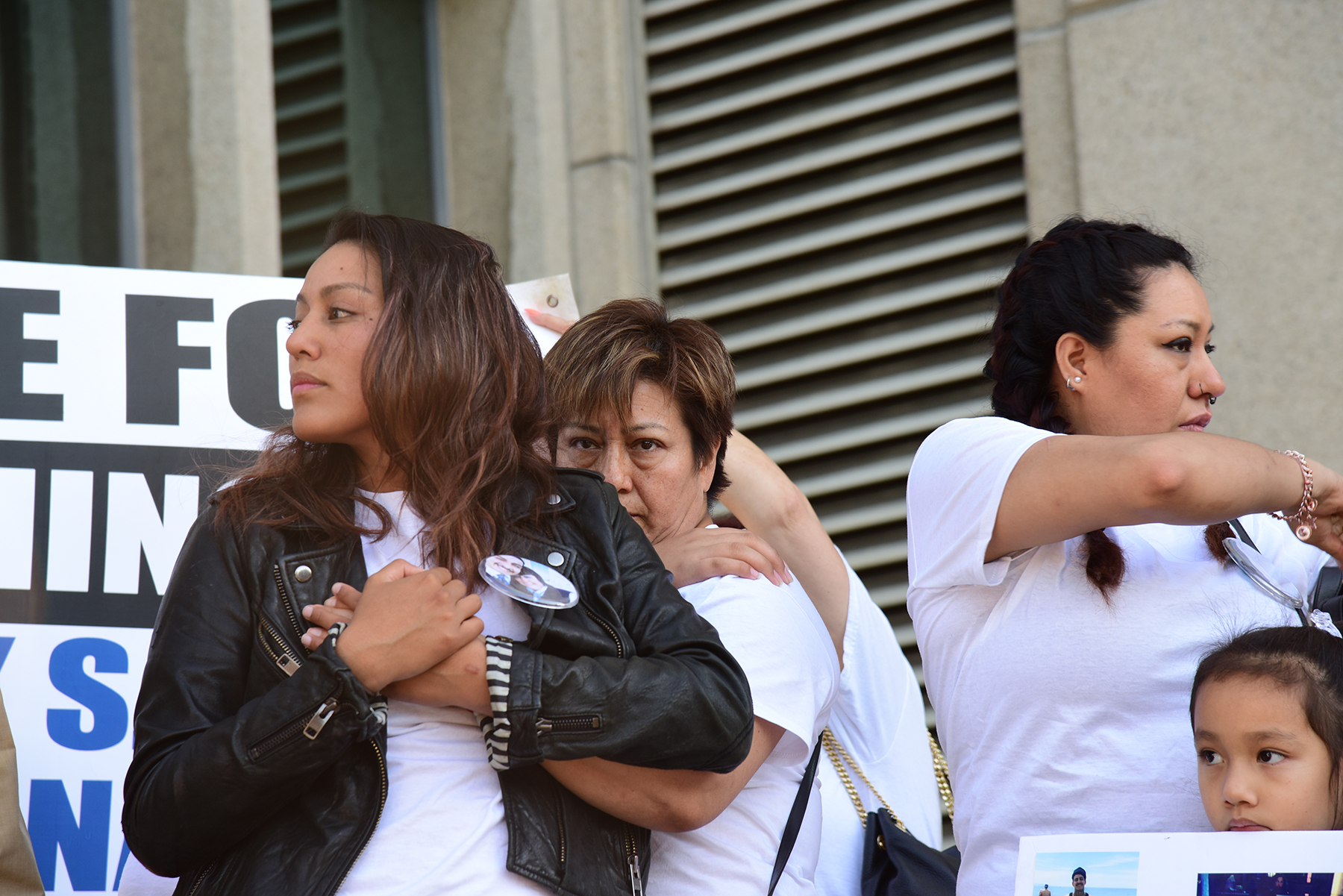 Family and friends of young Isai Lopez gather outside the jail to demand answers for their loved one’s death. They do not trust the Sheriff’s findings that Isai died by suicide, especially after the previous actions of sheriff deputies who murdered Michael Tyree in 2015. 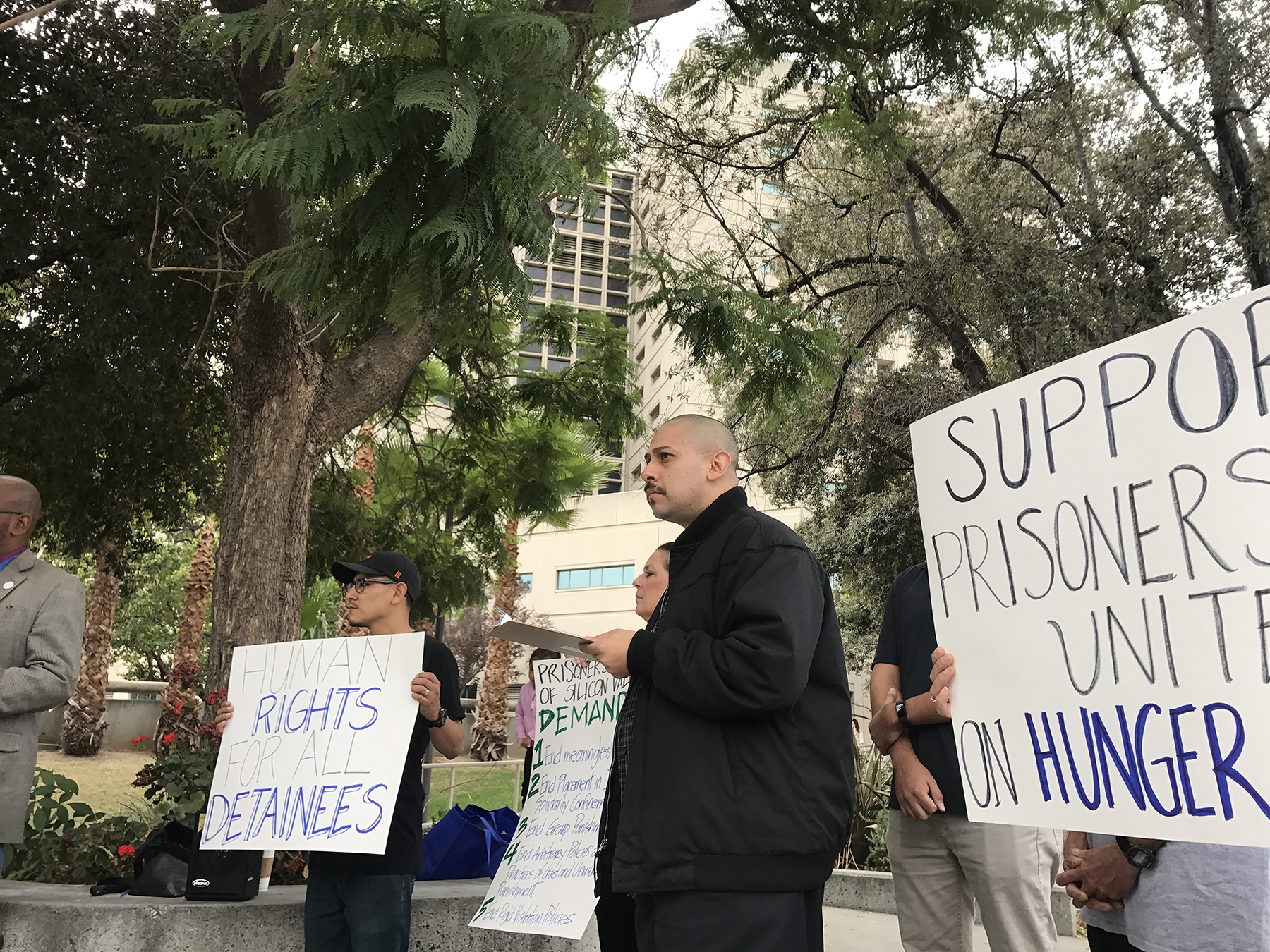 Despite the promises of change by the Sheriff’s Administration and the Blue Ribbon Commission’s recommendations for a nearly complete overhaul, our loved ones inside knew those policy changes dripped in ounces from Administration’s words to the cells.  The first hunger strike led by Prisoners United of Silicon Valley was in October 2016 and lasted for 5 days, and was joined in solidarity by their families and communities outside.  After the 5th day, Administration finally met with the individuals inside and agreed to immediate demands to improve jail conditions, as well as put into motion longer-term plans to implement change. 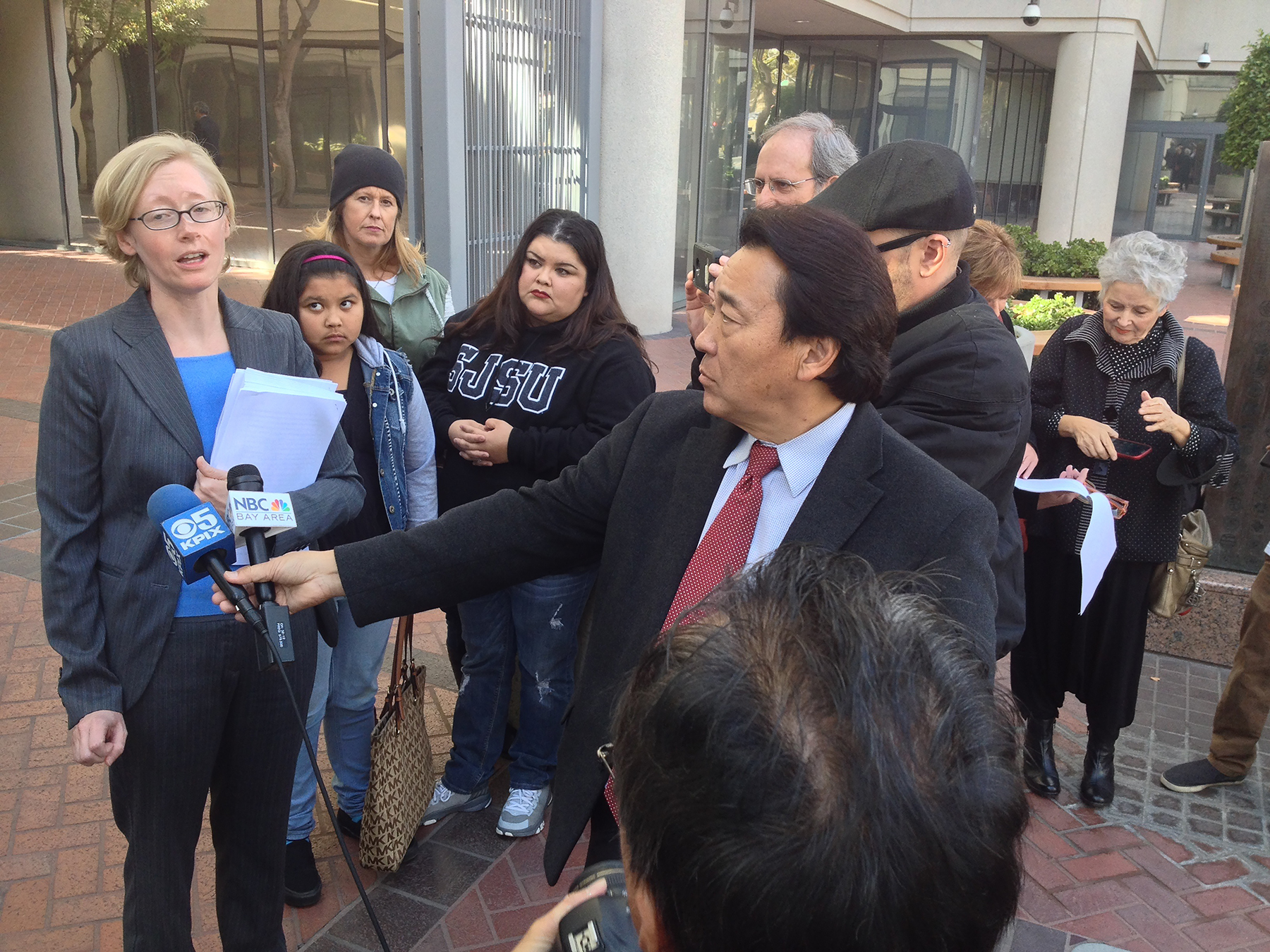 The Prison Law Office announces the Chavez vs. Santa Clara County lawsuit alongside families of loved ones inside the jail and the supporting community. In 2015, Santa Clara County was sued in a class action lawsuit for inhumane and unconstitutional conditions in the jail.  Individuals inside had exhausted all internal processes to grieve their conditions - including solitary confinement, lack of medical and health services, and lack of real oversight to address grievances.  The lawsuit settled in 2018. 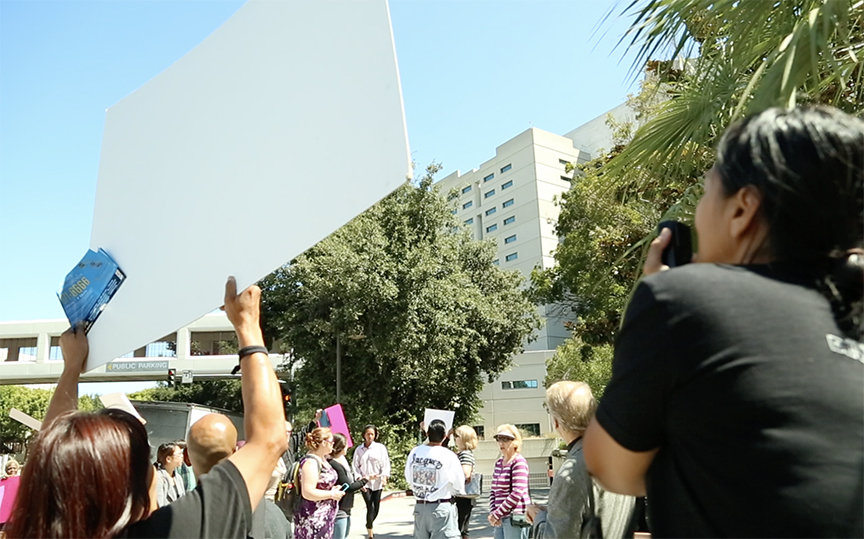 “Brothers in the Jail, We See You! Sisters in the Jail, We See You!” This was our collective chant in response to the death of Michael Tyree and the community of loved ones inside who organized for humane treatment and accountability. In 2015, Michael Tyree was beaten to death by 3 sheriff deputies.  He was released just days prior and was awaiting bed space at a mental health treatment facility.  As heartwrenching as his death was, it revealed the systemic nature of the harsh conditions inside the jails and the secretive culture that protected it. What resulted after that was years of organizing that ultimately led us to now, 5 years later - with the shutdown of the new jail.