Woman Survivor: Getting Through Domestic Abuse

By sharing her mother’s experience with domestic violence, this courageous young woman is helping end cycles of violence for all. We are honored to share Alexa's piece as the first of a collaboration with journalism students at Yerba Buena High School.

Life is full of difficult situations that every person on this earth goes through; it can be small or tragic difficulties. Either way, everybody goes through at least one challenge in their life.

Some people, particularly women, experience domestic abuse. What is it that leads people, mostly men, to domestically abuse their girlfriends, wives, or intimate partners? Arcelia Torres, my mother, is a survivor from one the most painful events of her life: getting domestically abused by her first husband, my biological father.

Domestic abuse is when one partner in any relationship is physical, verbally, sexually, emotionally, economically and psychologically abusive in any type of way to gain or maintain control/power over the other partner.
According to www.dosomething.org, 85% of domestic abuse victims are women.

My mother Arcelia went through a very tragic moment during her young adult years, which was around 5 years after she had arrived to the United States. My aunt introduced my biological father to my mother one afternoon; they started going on dates to get to know each other. After a while, they were in a relationship and later on to got married.

Arcelia said, “he completely changed his way of being when we got married, and not in a positive way, but in a very negative way.”

When they got married, my biological father made a big change within himself; he started using drugs, smoking, and drinking. This was his daily routine. This resulted into him domestically abusing my mother.

She didn’t know what to do anymore, she wanted out of this marriage very badly, but because of the fear holding her back, she didn’t do anything that would set him on his bad side. Many of the times she just tried avoiding him because she didn’t want him to start with his abusiveness towards her. To make things worse he wanted to have a child with her, but she didn’t want to because of how he was with her.

This resulted in him raping her multiple times so would become pregnant. After the last time he raped her, he took her to the doctor to see if she was pregnant or not. If she didn’t come out pregnant, he threatened to hurt her.

She said, “who would have thought that I would be getting raped by own husband.”

According to www.thehotline.org, 1 in 5 women in the United States have been raped by an intimate partner in their lifetime.

After a month passed, he took her to the doctor for a pregnancy test. He really wanted her to come out positive, but she wanted the opposite.

When she had me, her life changed so much. It felt as if she was living someone else’s life, one that she didn’t recognize. After some time she finally told him that she wanted to get divorced because he didn’t make any effort to positively change. He still continued to take drugs, smoke, and drink; he didn’t make any changes within that time. 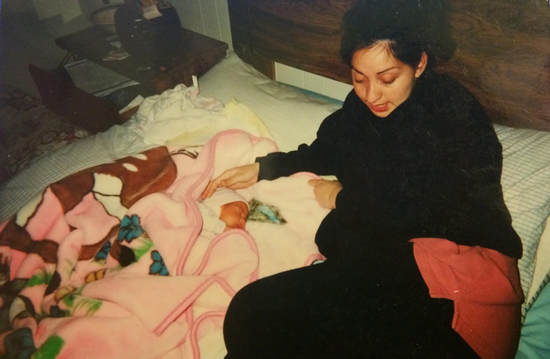 Arcelia with her child.

She said, “I finally grew the strength to tell him that I wanted to get a divorce. Before I talked to him about the divorce, I would always ask him to stop doing drugs, smoking, and drinking. These things were the ones making him get all crazy towards me, doing those horrible things to me, but he chose the drugs over his daughter and wife.”

He didn’t want to get a divorce, but he still went along with it because his mother told him if my mother goes and asks for the divorce papers, they would ask her for the reasons why she wanted to get divorced. So instead of her getting the divorce papers, he went to get them before she did. Also, instead of him putting the real reasons why they were going to get divorced, he made up things about her, which made her look like the bad one.

She said, “the divorce papers went through and we finally got divorced. Life got harder being a single mother, but it was way better for you and I this way.”

A couple of years passed and she moved in with one of her older sisters to find a better living for both her and I. For a couple of years It was economically hard for her.

She said, “the little money I would get from cleaning houses wouldn’t last because I would need to pay the babysitter for taking care of you, and as you got older, you needed more clothes since you were growing out of your old clothes very quickly.”

Later on, when I was around five years old, my mother got with my stepfather. They have been happily together for eleven and a half years now. I’m very glad my mother found someone better than my biological father.

Arcelia said, “I have now been happily married to my husband for four and a half years, the father of your two youngest siblings. He’s been the father to you since you were five years old. The father your biological father never was - he chose drugs over his family.”

This story was first published by The Warrior Times

The Warrior Times is Yerba Buena High School's student-run news publication that creates stories by the youth, for the youth. The young people write passionately about issues occurring in their lives, communities, and the world. Together, they are working toward elevating collective consciousness, compassion, and commitment to justice.


Related Media:
Sister Warriors, Convening for Incarcerated Women & Girls #FREEHER
She Been Puttin' In Work - De-Bug's National Coverage of the Womyn Led Resistance
R. Kelly and Black Girls - Why We Should Care

Alexa is a high school student at Yerba Buena High School in East San Jose and a Story Editor with The Warrior Times.