On the California ballot this November 2020 is Proposition 16, which will bring back affirmative action in public employment, education, and contracting decisions. The aftermath of Prop 209 that was passed in 1996 resulted in a significant drop in Black and Latino youth in California’s public universities. Here in Santa Clara County, many of our young people are at the forefront of leading the fight for racial and gender equality through Prop 16. On September 26, the NAACP Youth Chapter was one of the lead organizers of a local San Jose rally to push for a yes vote on this Proposition. Below are speeches by 3 of their leaders whose passionate voices are every promise of our movement.

My name is Shruthi. I’m a senior at UC Irvine, and I’m also the co-founder and co-president of UC Irvine’s very first civil rights official campus organization. I’m from Cupertino, California. This is very relevant as there is a LOT of opposition toward Prop 16 in my community, so I believe it is important for me to raise my voice in an effort to help my community understand why Prop 16 is in fact necessary. I would like to point out that there is an understandable reason for the opposition; many Asians, and I can especially say this for Indians, faced a lot of hardship because of the caste-based quota system present in higher education in Asian countries. And they don’t want their children to endure that, which I can empathize with. However, I’d like to clarify this right off the bat: racial quotas are banned constitutionally, so that won’t happen. Just to get that out of the way, since I know that’s been floating around the WhatsApp group chats.

Following that, because Asians believe Prop 16 will bring in racial quotas, they also believe that less Asians will get into college because they believe Asians will be critiqued more harshly when their applications are being reviewed. But that is NOT TRUE. This is a MYTH. At my school, UC Irvine, it is 30% Asian and 2% Black. That disparity is humongous and it NEEDS to be fixed.

But the people from Cupertino don’t want it to be fixed because they believe it will lead to people that in their minds deserve admission to be rejected in favor of somebody who in their eyes doesn’t deserve it. This comes from something called the Model Minority Myth. That’s the idea that even though Asians came here as immigrants with only $6 in their pocket, as I’ve heard so many uncles and aunties say, and that they were able to succeed from “pulling themselves up by the bootstraps”. It goes to follow, by their logic, that the reason why not every community is “successful” is because of laziness or lack of intelligence.

The Model Minority Myth is NOTHING but a myth. It ignores the fact that there is a wide variety even in the Asian community. You have people from China, India, and Japan, but also Cambodia, Vietnam, Laos, and other nations. Not all Asians, and especially not all people of color, have the same access to resources in terms of education. Not everybody has 12 SAT prep centers on every block. Different demographics have different access to resources as well as different opportunities. Black people face systemic racism as well as anti-Blackness from white people AND from non-Black POC. Indigenous communities have had their land STOLEN from them for centuries and to this day experience many barriers to success as well as pervasive lack of resources. To remain “race-blind” is to IGNORE the barriers that different demographics face. East and South Asians have to remember that of course our parents had to work hard to get the education necessary, but once they got here, opportunities for success were much more accessible for us. We have to remember our privilege. Not everybody has those opportunities.

And yes, of course our parents did the work to get here, but the fact remains that we absolutely wouldn’t be here today if it wasn’t for the BLACK civil rights activists and the civil rights movement of the 1960s. Because of them and their hard work, the Immigration Act of 1965 was passed, overturning previous laws that had seeked to either limit or entirely ban Asian immigration into the United States. Without them, I wouldn’t be here. So to vote “no” on Prop 16 and continue to allow people of color to face disparities in terms of university admissions is, in my opinion, ungrateful to the work that Black civil rights activists have done that we benefit from.

Proposition 16 is one way to fight against white supremacy and help ensure that all people have equal access to higher education, to employment, and to success in general. While it certainly will not fix all inequality, and while more work will certainly have to be done after it passes, it’s still a small step toward justice and equality for all. There is a common misconception that the best way toward equality is through “colorblindness”, or pretending that race doesn’t exist. People believe that if they claim they “don’t see color”, then they can’t be racist. But acknowledging somebody’s race doesn’t make you racist, because there’s nothing inherently wrong with being a non-white person. Instead, we should understand

that one’s race does play a role in shaping their experiences and how they see the world, and we should work to dismantle the systems that allow different races to experience different barriers rather than just pretending race doesn’t exist. Because you can’t fight racism without acknowledging race. 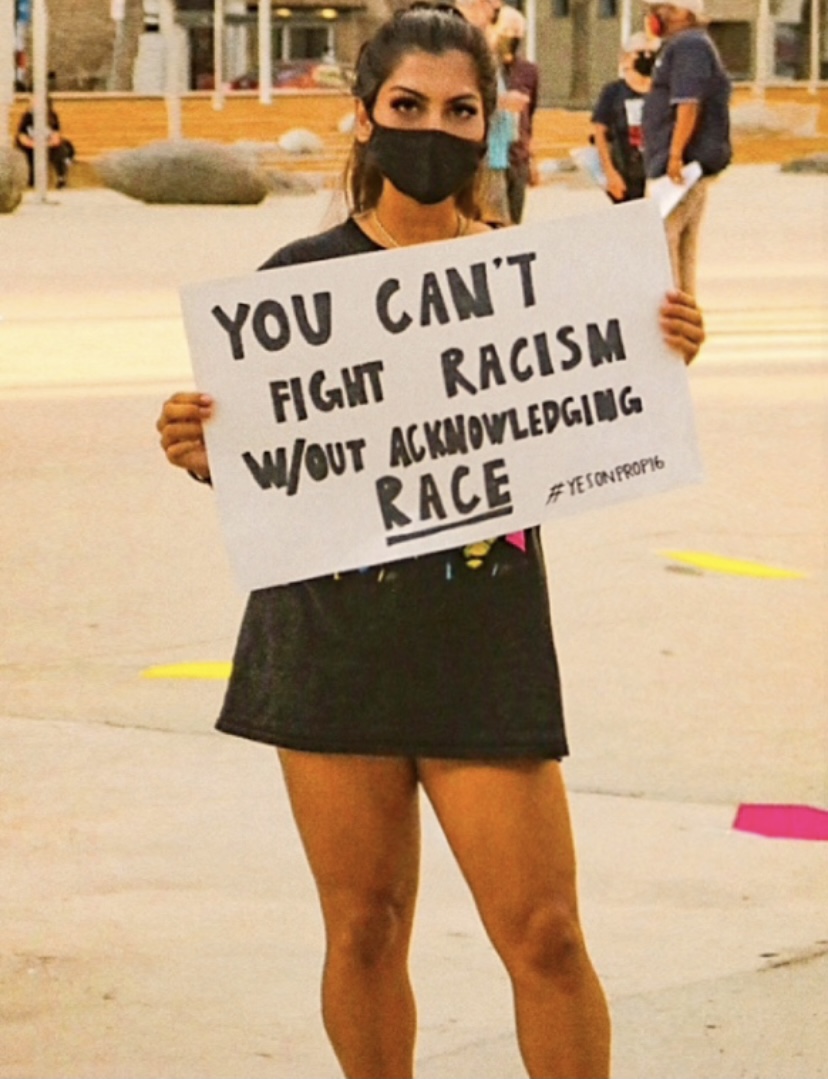 Jai Ramamurthy: “I’m Not Equal Until Black People Stop Getting Shot For the Color Of Their Skin.”

Hi I’m Jai, a 17 year old senior at Silver Creek High School.  So, affirmative action huh? If you can’t tell, race is connected to everything. The color of our skin determines so much, even in this Bay Area bubble. So many people here think affirmative action is unnecessary. That it hurts them only. That their kids aren’t going to get into college. That their kids won’t get the jobs they want because a person from an oppressed race got it.

This has to stop.

We have to come together to eliminate racism, but that can’t be done by ignoring it, or only “considering” it in the public sectors. Affirmative action should never be a thing in a perfect world. Why would we need to consider race & gender when everyone is equal? Well -- surprise here -- because we’re not all equal. I’m not equal until Black people stop getting shot for the color of their skin. I’m not equal until those women in ICE facilities get their organs back after having them removed without consent. And I’m not equal, until we uplift the oppressed people of color out of the hellhole that racism got them into.

Look around. The Bay Area is one of the most diverse areas in the United states. Yet we’re so divided here. The Bay Area bubble is real. This, in part of the selfishness people have to benefit off of the oppression people of color face is one of the main ideologies that is dividing us right now. How can the same people who repost BLM on instagram and attend the BLM protests be the same people voting No on Prop 16? It’s a direct contradiction. These same people also directly quote their arguments from Prop 209, which banned affirmative action or as they worded it, the discrimination based on race, gender, and ethicity. Though, Prop 209 was intentionally worded in that way to make sure that it would be passed.  There’s a real difference between discrimination and racism, and let me tell you, racism is a pandemic. You want to eliminate racism, uplift race, don’t ignore it. Thank you.

Kyle Dacallos: “It’s Not Easy Going Through The Struggle, But There Is Always Beauty In The Struggle For Liberation.”

What is systemic change? Systemic means throughout the whole system & change means to make a difference. This means that throughout the oppressive government we are caged under, we want a difference for the people. Why is there a school to prison pipeline? Why are there police that kill people of color in cold blood and are never brought to justice? Why is it that low income neighborhoods are never given the full resources for education? Please, explain these to the generation of youth who have been affected by systemic racism. We must continue to fight against these setbacks.

It’s real simple, we want leaders that are for the people, by the people and leaders that’ll fight for the people. We, as the people, have that power to speak out against the oppressor. We have the power to vote these people out of office. These leaders have been working for corporate interests instead of showing government transparency. It’s people over profits, not profits over people. The oppressor will always make us feel powerless, but when we are united together we can take that power back.

My message to everyone is to please VOTE. And if you’re not old enough, educate yourself about all these issues and be prepared to use that power of voting. The NAACP Youth chapter has been working with a wonderful group of community organizers and high school youth. We’ve been working to spread awareness about Prop 16 which is on California’s ballot. Prop 16 will help bring affirmative action back into law. From the yesonproposition16 website, it states that they believe in giving everyone, regardless of race or gender, an equal shot at fair wages, good jobs, and quality schools.

But we’re not there yet. Women and people of color still face discrimination in hiring, employment, contracting, and education. California is one of only nine states that bans affirmative action as a tool to fight discrimination. Proposition 16 is our chance to change that by ending the ban and expanding opportunity for all. So VOTE YES ON PROP 16! 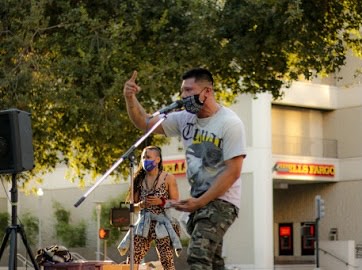