De-Bug developed a voter guide on the propositions we believe will lead to decarcerate our jails & prisons, increase higher education and employment opportunities for people of color and women, expand voting rights, hold corporations accountable to worker's rights & keep people housed. Download the images to share with your networks.

Rise up to Vote!

Let's do our part from the streets to the voting booth! There are critical issues on the ballot that will affect our daily lives - especially for communities of color. We have the opportunity to expand who can vote - youth and folks stripped of the right, expand access to higher education, keep families housed, protect workers' rights and to defeat attacks on family driven justice reforms that seek to incarcerate more people.


We will be adding more media as it is ready. 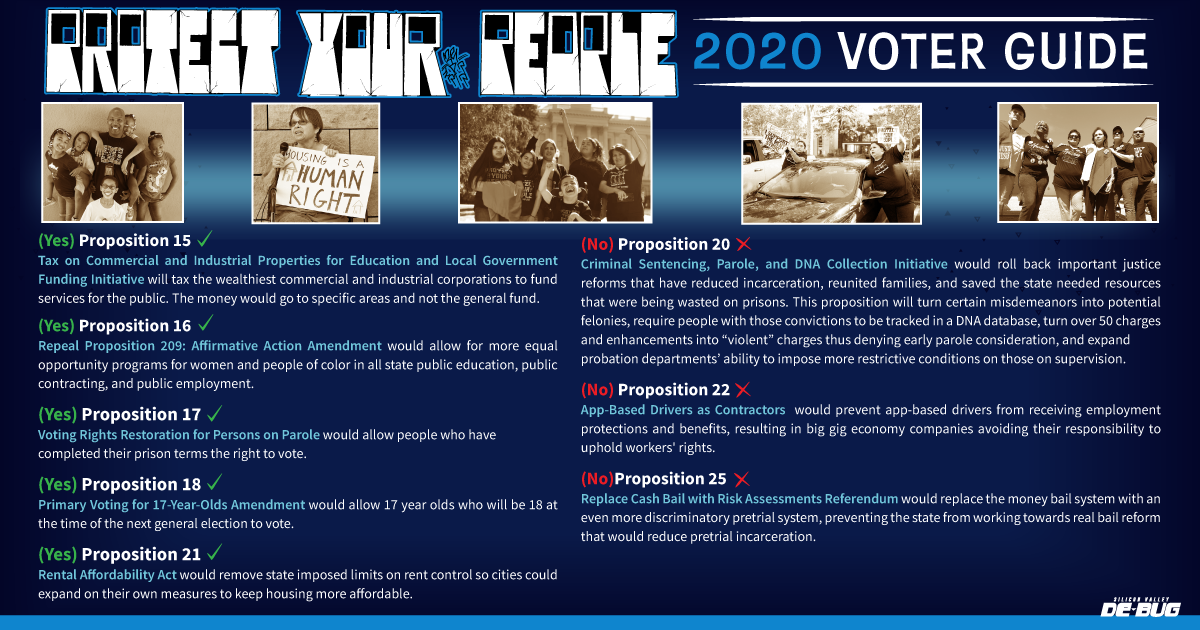 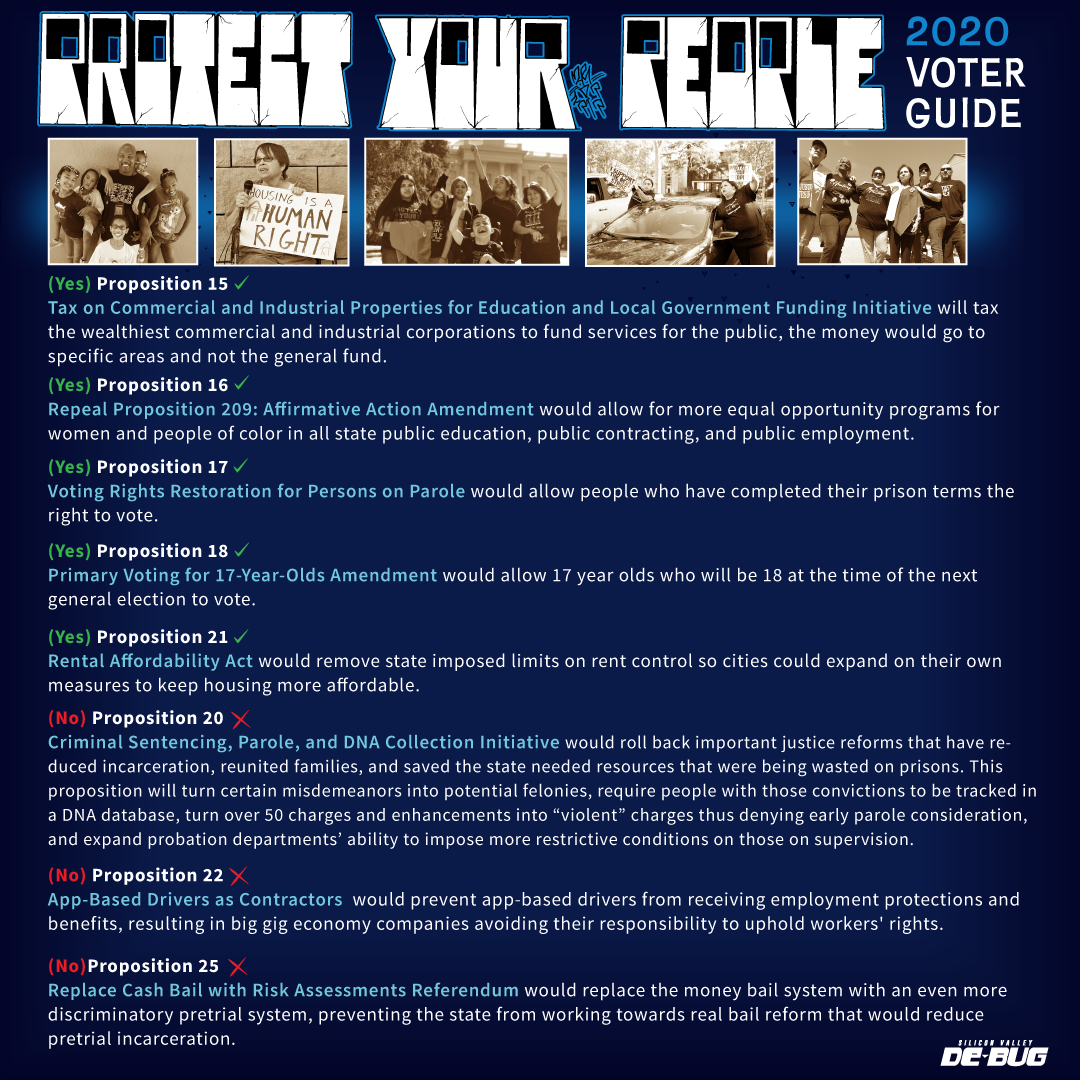 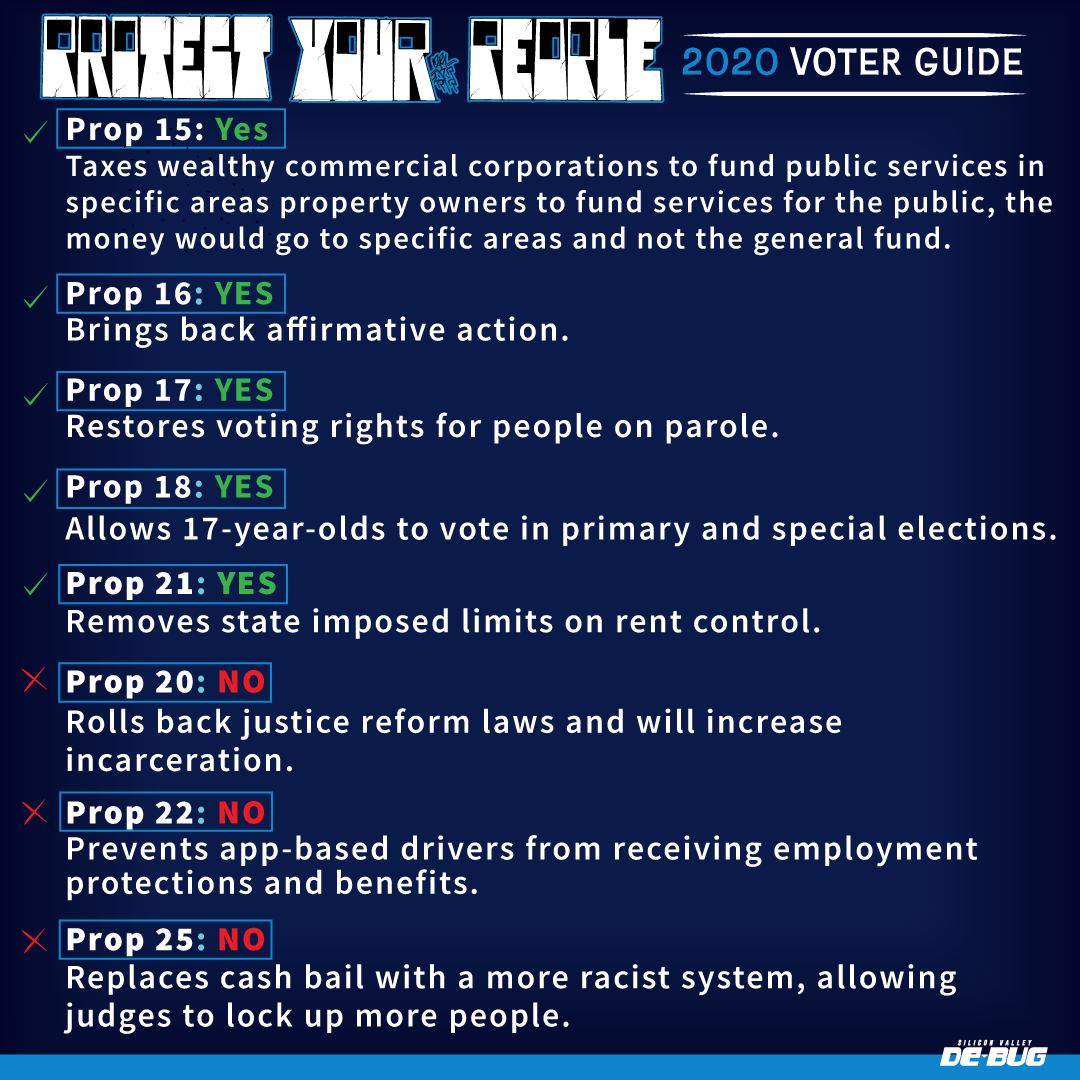 Melissa first linked up with De-Bug through Participatory Defense, fighting for her husbands freedom. Now, she is advocating for other families too by saying No on Propositions 20 & 25!


Ebone speaks from personal experience of fighting for her husband's freedom & shares what Prop 20 & 25 would mean for her family, and why she's urging you to Vote NO on Prop 20 & 25.

Cynthia is voting YES on Prop 16 because she had the opportunity to be considered for a job in high tech 30 years ago, now women and minorities are grossly unrepresented in the field. 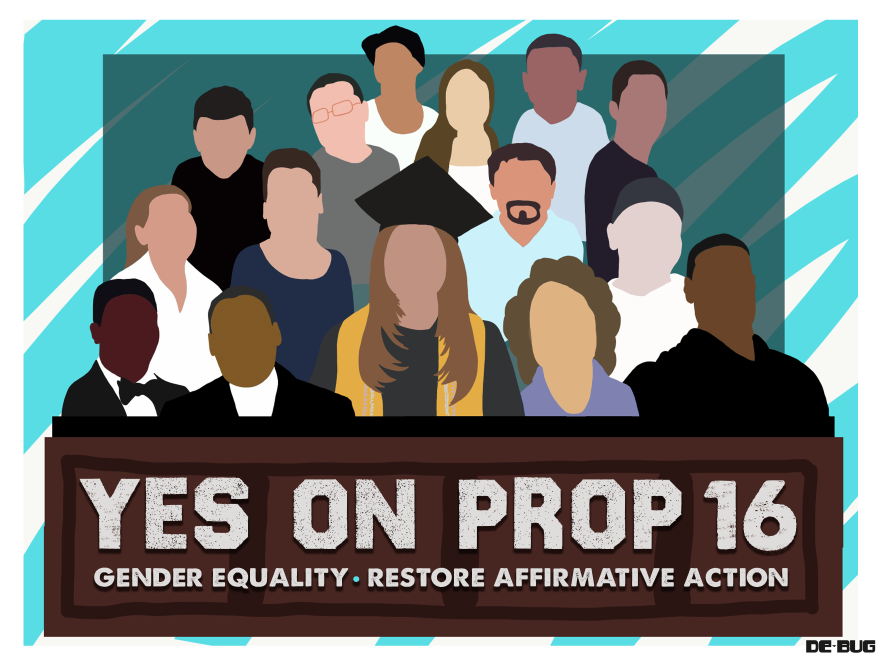 This graphic was important to me because it shows diversity, you have icons in the front row, fellow San Jose people throughout the group and a graduate women in the middle. To me this represents our diverse community and success for all. Us women and minorities should also have opportunities to be successful life.

We need to hold corporations accountable when it comes to paying their taxes. We are a yes on prop 15 because it will create new tax rules and close loopholes for businesses and commercial properties that operate with more than $3M. These taxes will generate an estimated 12.5B a year in California to support schools and community services. As individual taxpayers that pay our fair share of taxes, we call on the wealthy to also pay their share!  We should already be investing more in our schools but this would ensure it. We must invest in education and students rather than leave their needs when we could be using funds to support them. During this pandemic, there have been clear inequities for low income students who don’t have the resources they need for remote learning, it’s a good start to use corporate tax money to support these students.

We also need to hold corporations accountable for paying their employees. Uber, Lyft, and DoorDash have spent about 150 million on their yes on 22 campaigns but could not pay their employees hazard pay, benefits, or sick leave at the start of the pandemic. A yes on 22 would leave their employees with less job security and protections while they are driving and end up hurting certain groups such as immigrant workers. These companies want to keep their labor but not willing to pay for it. We are a no on prop 22 because we believe workers deserve to be recognized as and treated well by the company that employs them.

Those Who Fight for True Pretrial Justice Say No to Prop 25
As a public defender, community organizer, and retired judge/former Independent Police Auditor we care deeply about justice in the courts.  It is easy to agree that our current cash bail system has serious flaws.  But replacing a discriminatory cash bail system with an an even worse risk assessment-based system that creates more ways to keep people in jail pretrial, is not the solution. That is why we strongly urge our community to vote no on Prop. 25....continue reading here.

My name is Shruthi. I’m a senior at UC Irvine, and I’m also the co-founder and co-president of UC Irvine’s very first civil rights official campus organization. I’m from Cupertino, California. This is very relevant as there is a LOT of opposition toward Prop 16 in my community, so I believe it is important for me to raise my voice in an effort to help my community understand why Prop 16 is in fact necessary. I would like to point out that there is an understandable reason for the opposition; many Asians, and I can especially say this for Indians, faced a lot of hardship because of the caste-based quota system present in higher education in Asian countries. And they don’t want their children to endure that, which I can empathize with. However, I’d like to clarify this right off the bat: racial quotas are banned constitutionally, so that won’t happen. Just to get that out of the way, since I know that’s been floating around the WhatsApp group chats. Continue reading here.