On International Women's Day, we celebrate all the women & femmes in our lives and remember the words of Dolores Huerta.

On the centenary of women's suffrage, International Women's Day takes on a special significance. We live in an era in the United States in which women's equality and voting rights are under attack from the Federal Government. Patriarchy, misogyny, and purging of voter rolls have become the practices of an exclusionist populism. So it becomes vitally important to reassert the full equality of women and universal suffrage.

The Nineteenth Amendment to the U.S. Constitution granted women the right to vote in 1920, but not without a long struggle. Women around the world were rising up for equality and equal suffrage. In the U.S. a Women's Day was organized in New York City in 1909. Clara Zetkin, a German revolutionary, proposed in 1910 that March 8 be declared an international day in honor of working women. Upon the overthrow of the Qing Dynasty in 1911, Sun Yat-sen pledged to give women in China the right to vote. In the revolutionary wave that toppled the Tsar in Russia in 1917, women celebrated the first International Women's Day. International Women's Day has been celebrated in many countries around the world ever since. 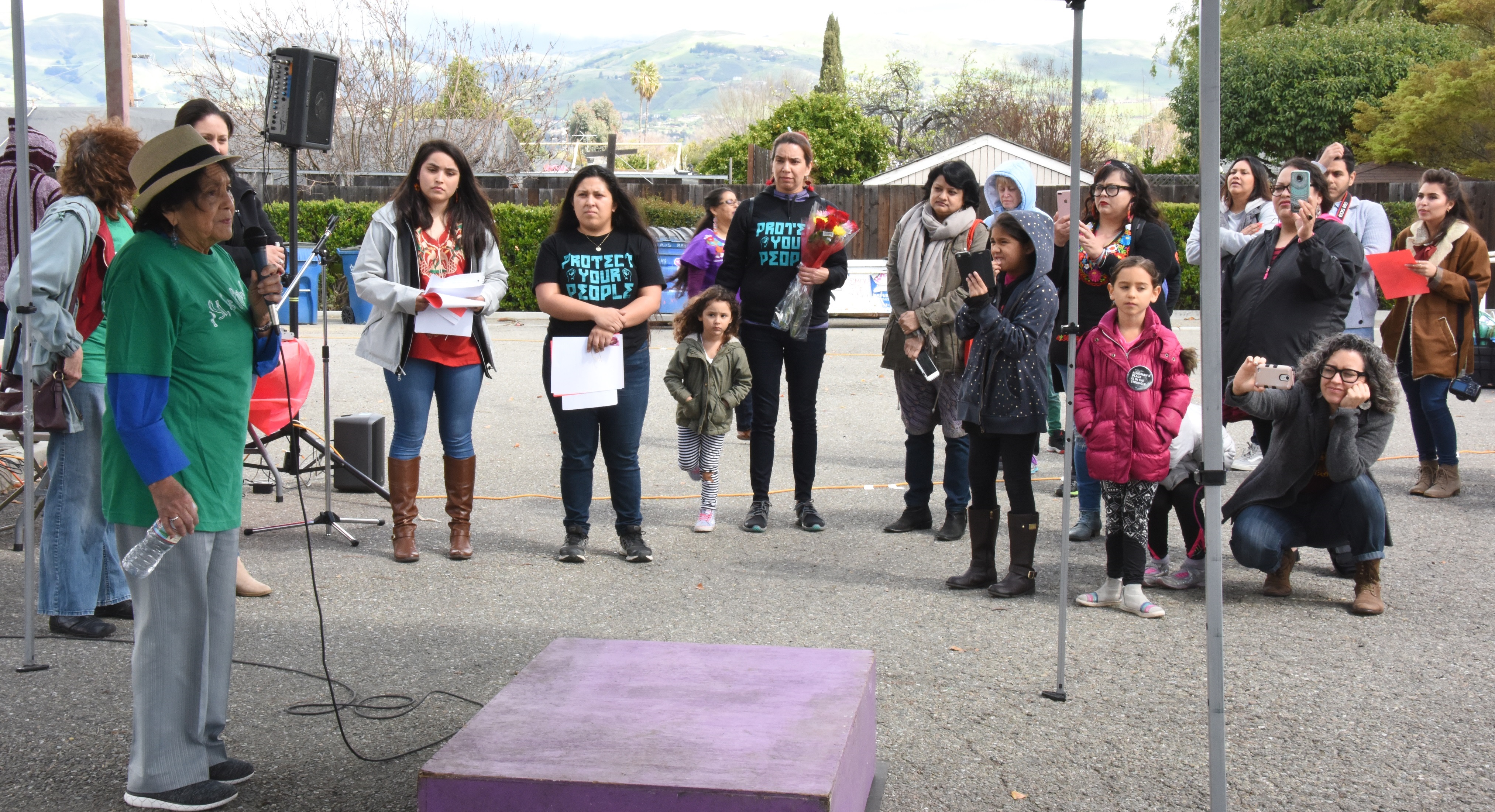 Speaking at a rally for International Women's Day organized by the South Bay International Womyn’s Day Network in San José on March 17 2018, Dolores Huerta, cofounder of the United Farmworkers' Union and lifelong feminist and women's rights activist, addressed an enthusiastic crowd before marching.

"It is really interesting that all over the world it is celebrated, International Women's Day, except here in the United States of America.

In Spain, the women went on a 24-hour strike to talk about the abuses against women. And we know that this is one of the things that we have to continue to fight for until we see the day that women are treated equally as the men, okay!"

Dolores went on to recount some hidden histories of people's struggles:

"You see that I am wearing green today. I know we are supposed to be wearing red, okay. But I guess we are in the streets because, as we march, remember there was a group of Irish in México, the San Patricios, right, Irish men that were sent to México to fight against the Mexicans in the revolution. And, guess what? When they got there they said, ‘No, these people are like us,’ and they jumped sides and they actually fought with the people in the revolution in México when they were fighting for democracy and freedom. So let's remember them also as we march today and say a silent prayer because they were all hung right there in México City where everybody could see them once they were caught. So we will remember them also in our prayers."

Dolores reminded the crowd of the need to remember those who gave their lives in the course of fighting for social justice right here in the United States:

"And all of our martyrs also, okay, the farmworker union martyrs, you know -- Nan Freeman, a young Jewish woman, Nagi Daifallah, a Muslim, Juan de la Cruz, a Catholic, Rufino Contreras, Rene López, Rubén Salazar, all of the martyrs that we have had for our movement and the people that have been killed in Latin America that are fighting for environmental justice. So we have a lot to pray for."

Referring to the regressive words and policies of the current U.S. administration, Dolores gave us hope:

"And when we see the dark time that we are living in, we are bringing the light. And remember the words of Pablo Naruda, ‘They can cut all the flowers, but they can't hold back the spring.’ Right? And who is the spring? [audience: We are!] Who is the spring? [audience: We are!] Okay, and we can never forget that. So no matter how big the obstacles look, we know that we the people have the power."

It is the power of the people in the collective struggle for social justice and peace that we must uphold at International Women's Day. The celebration upheld that hope with the march, music, dancing, art, and spoken words.

Related Media:
Day of Outrage to Remember Atatiana Jefferson & Stand up for Black Women
CASS and the Freedom Warriors  -- How Sisterhood took 10 years Off of A Prison Sentence