Last month, Stevie Juarez was killed at the hands of the Gilroy Police Department. This past Saturday, his family and community marched through the streets of Gilroy to demand accountability from the police. 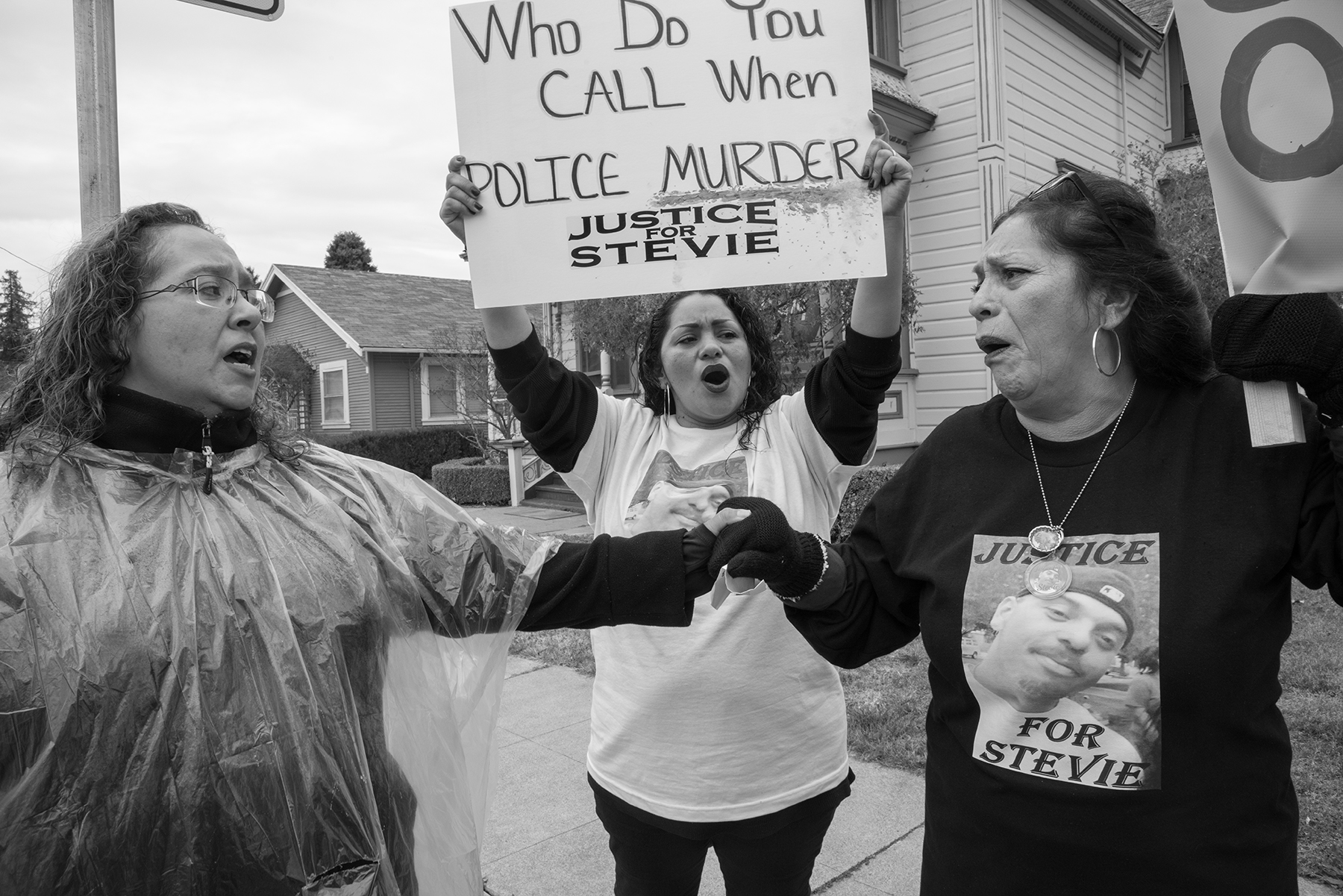 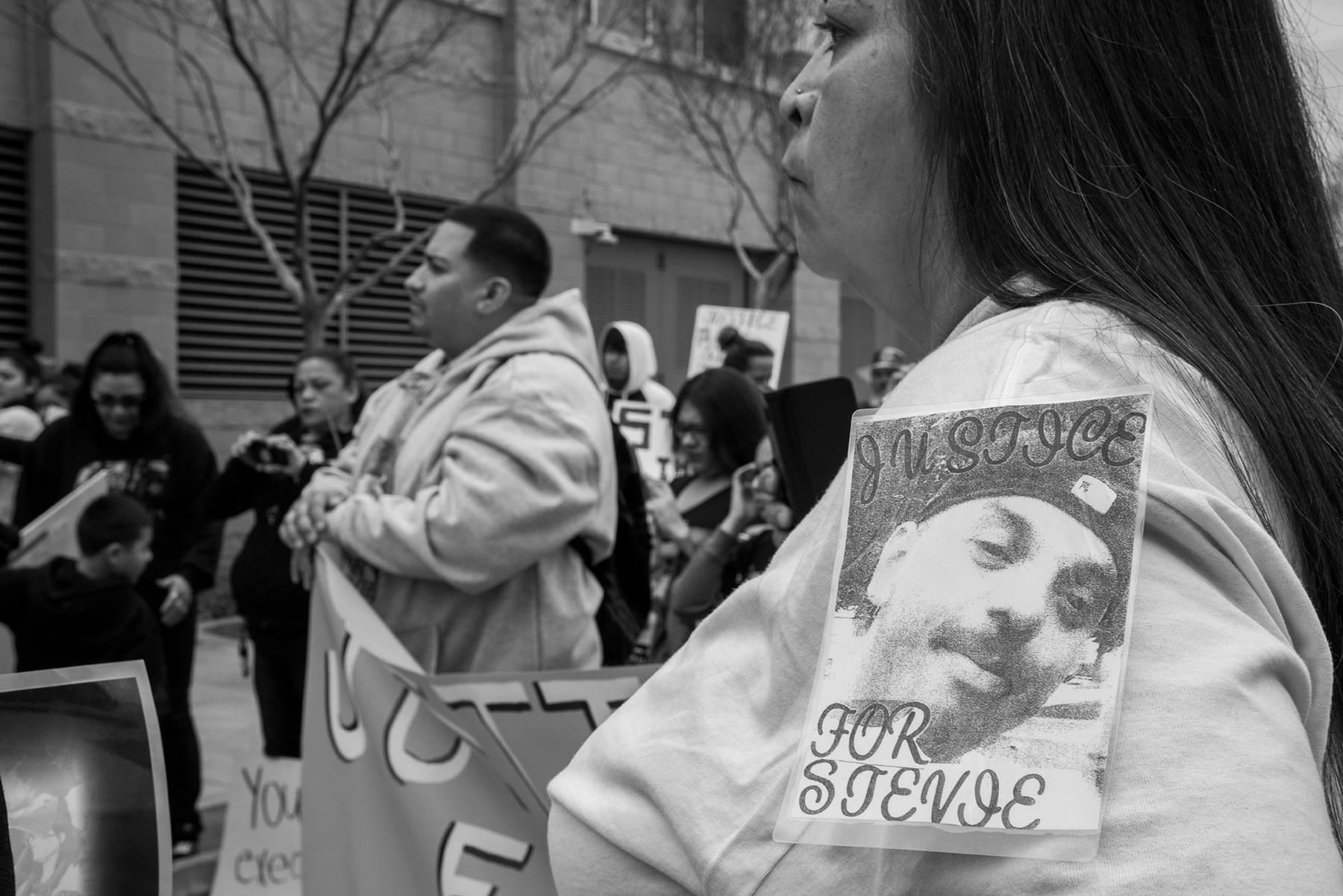 More than 100 family members, friends, and community support marched almost a mile from Chestnut Street (where Stevie was killed by Gilroy Police) to the Police Station. Many laminated photos of Stevie and pinned them to their clothing. 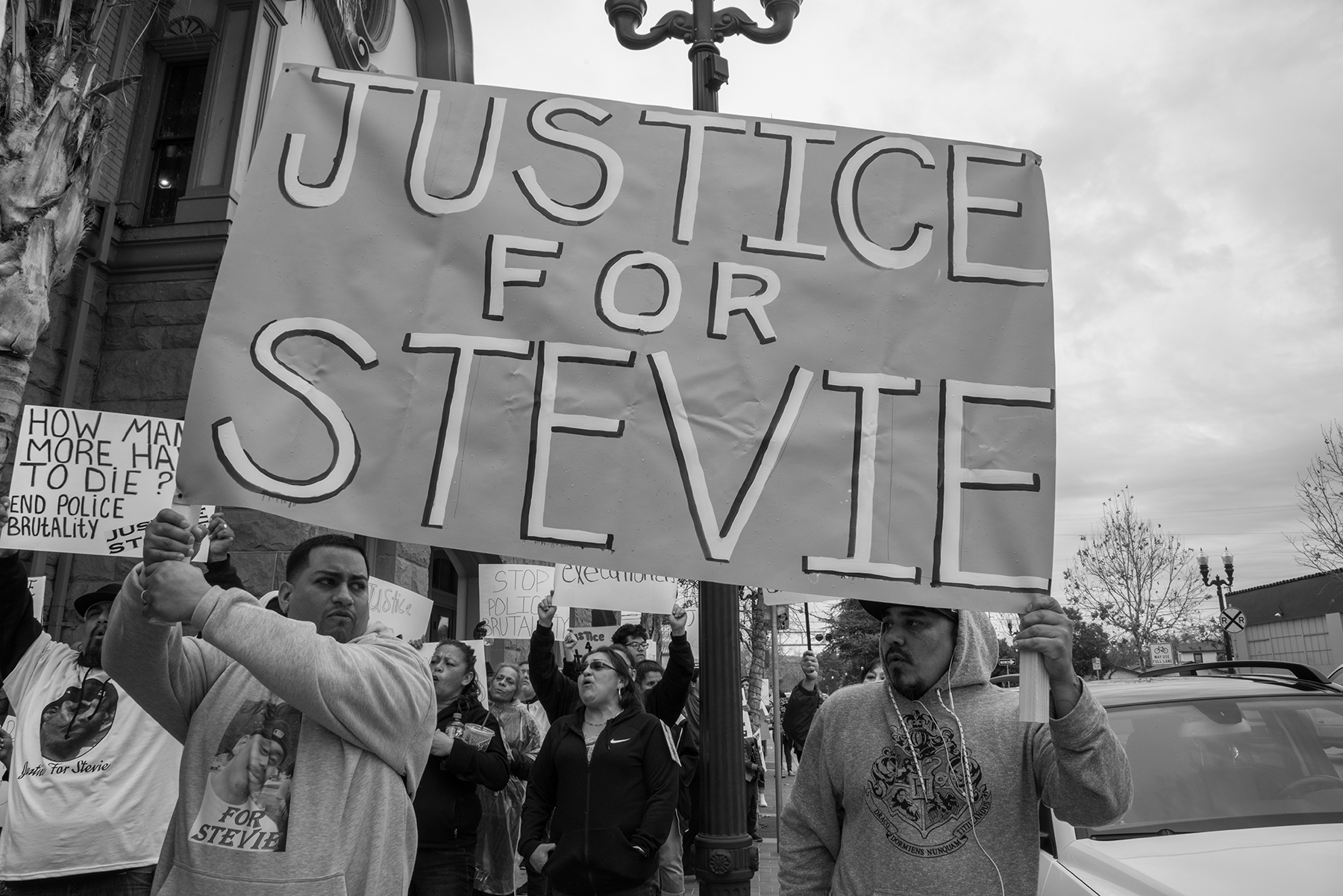 Family members march in the rain with handmade signs calling for Justice for Stevie. 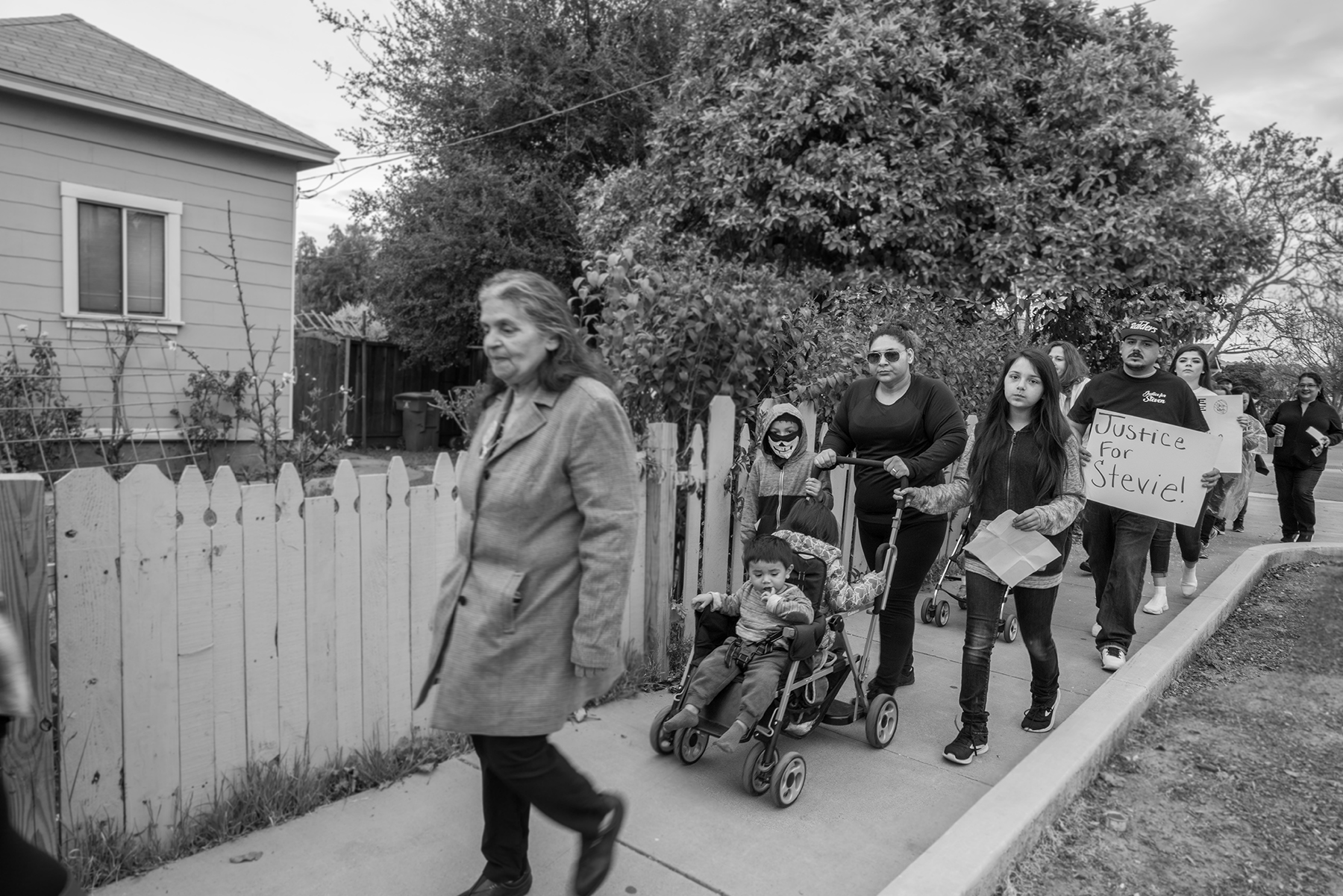 Stevie's aunt Sally has been a longtime trusted community leader in Gilroy, CA. The march that drew more than 100 people, was made of families who themselves knew the kind of police harassment that takes place in the city of Gilroy. 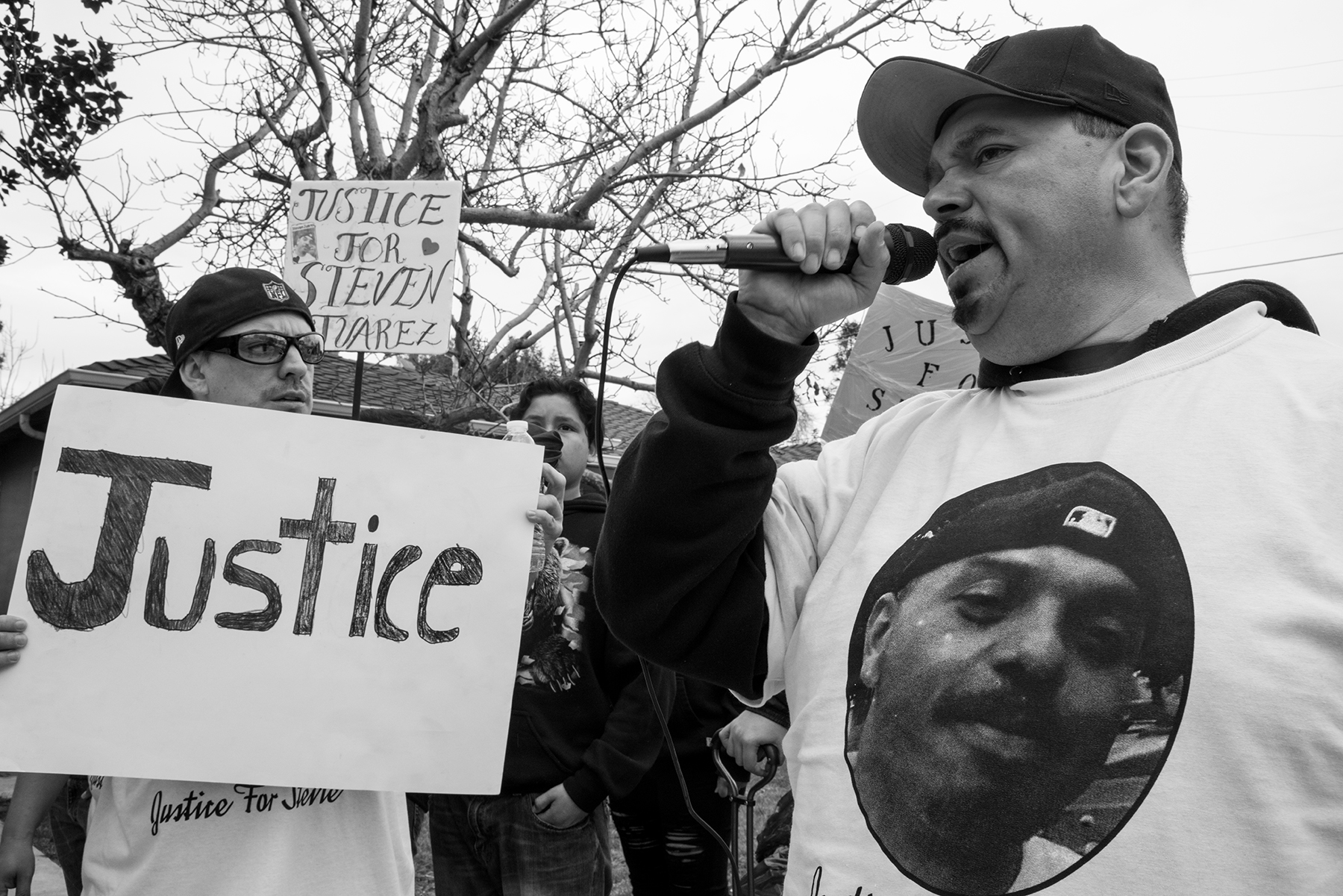 Reymundo Armendariz, right, leads the crowd in chants. Reymundo is the lead Director of CARAS, a trusted community organization in Gilroy, supporting the call for police accountability. This personally hits home for Reymundo, as Stevie is his cousin. 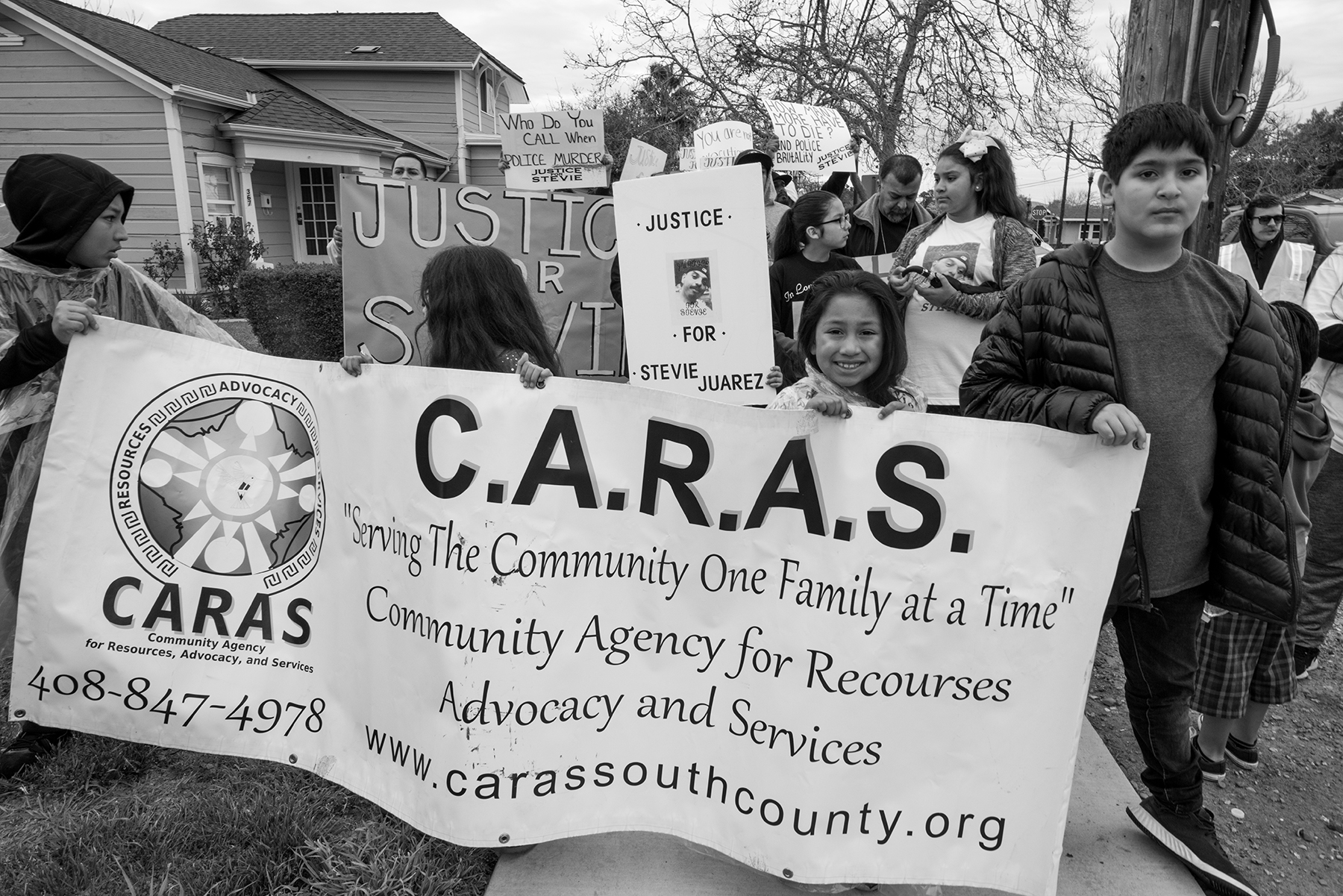 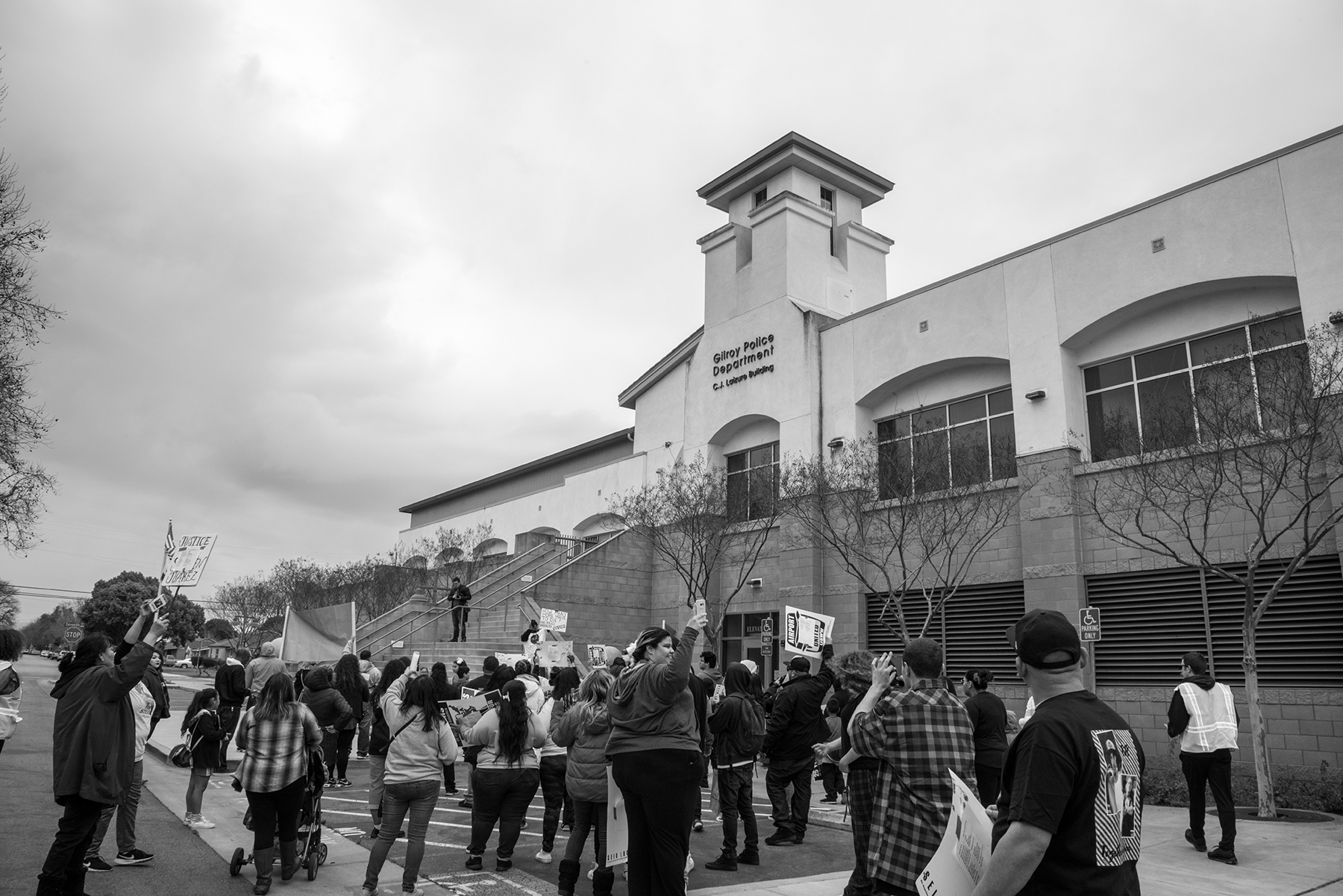 Reaching the Gilroy Police Department, the crowd gathers to call for a
meeting with the Police Chief and the family. 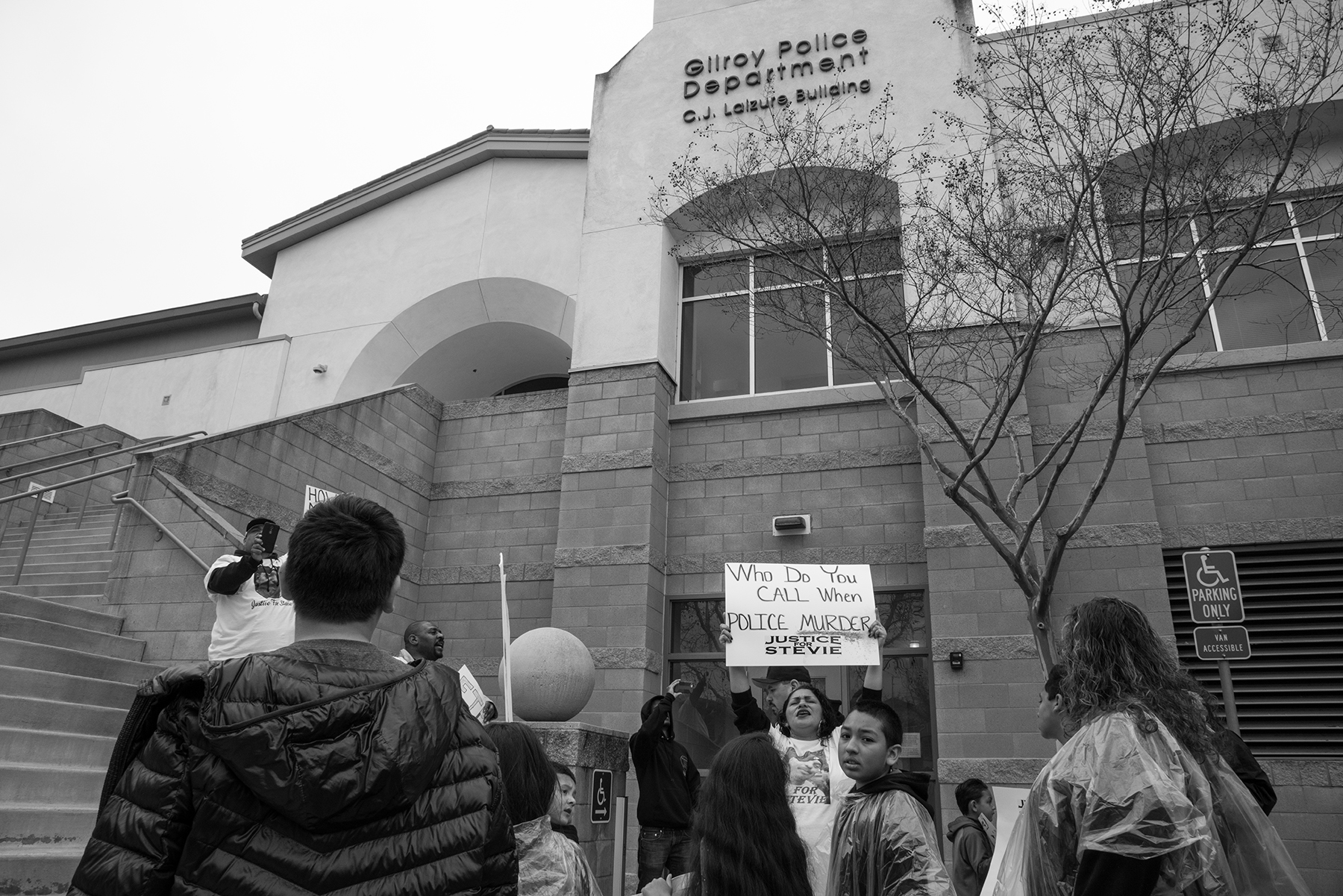 The crowd continued to call for a meeting with the Police Chief and the family. 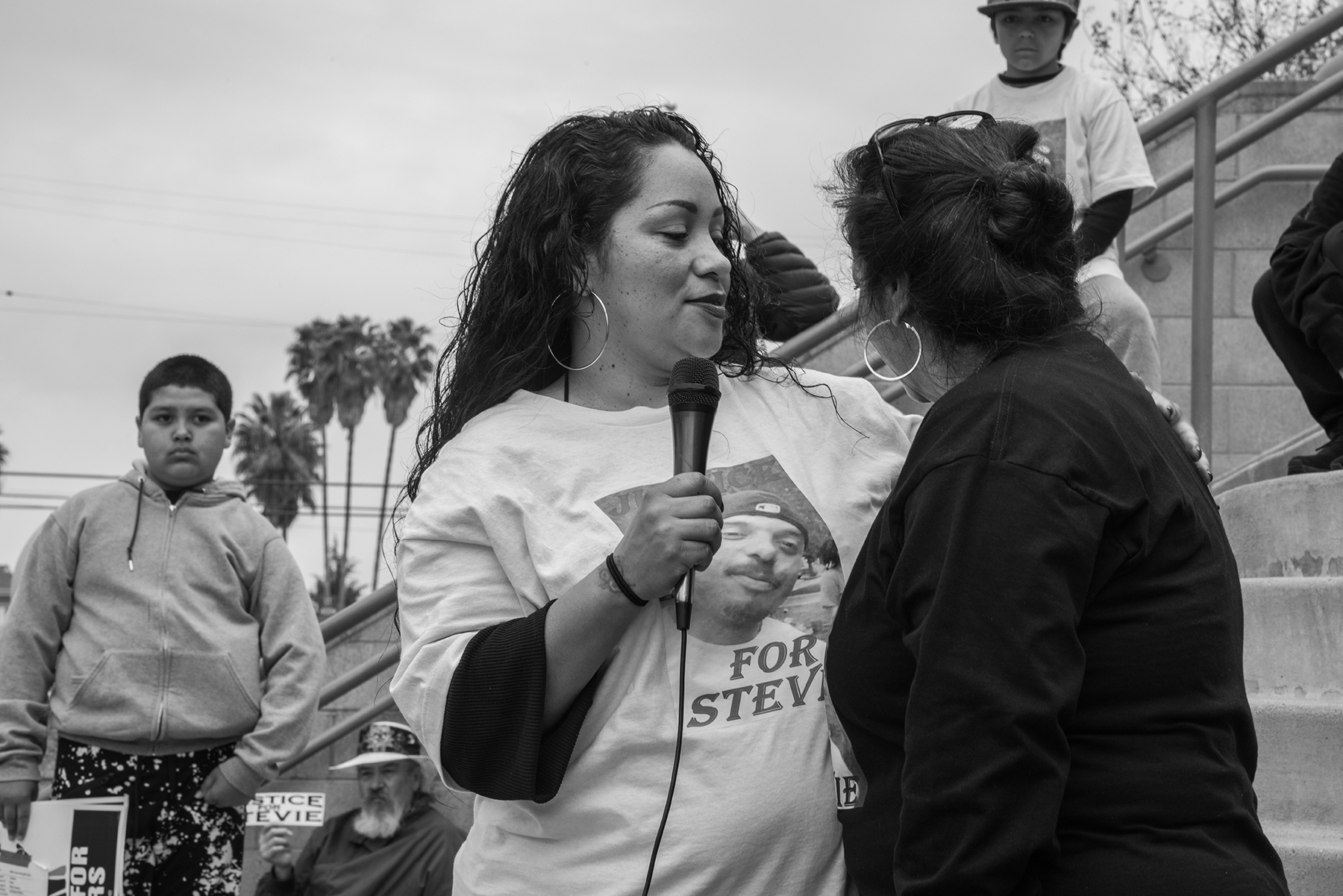 Monica, Stevie's sister, calls up her mother Martha,
to wrap the crowd's energy around her. 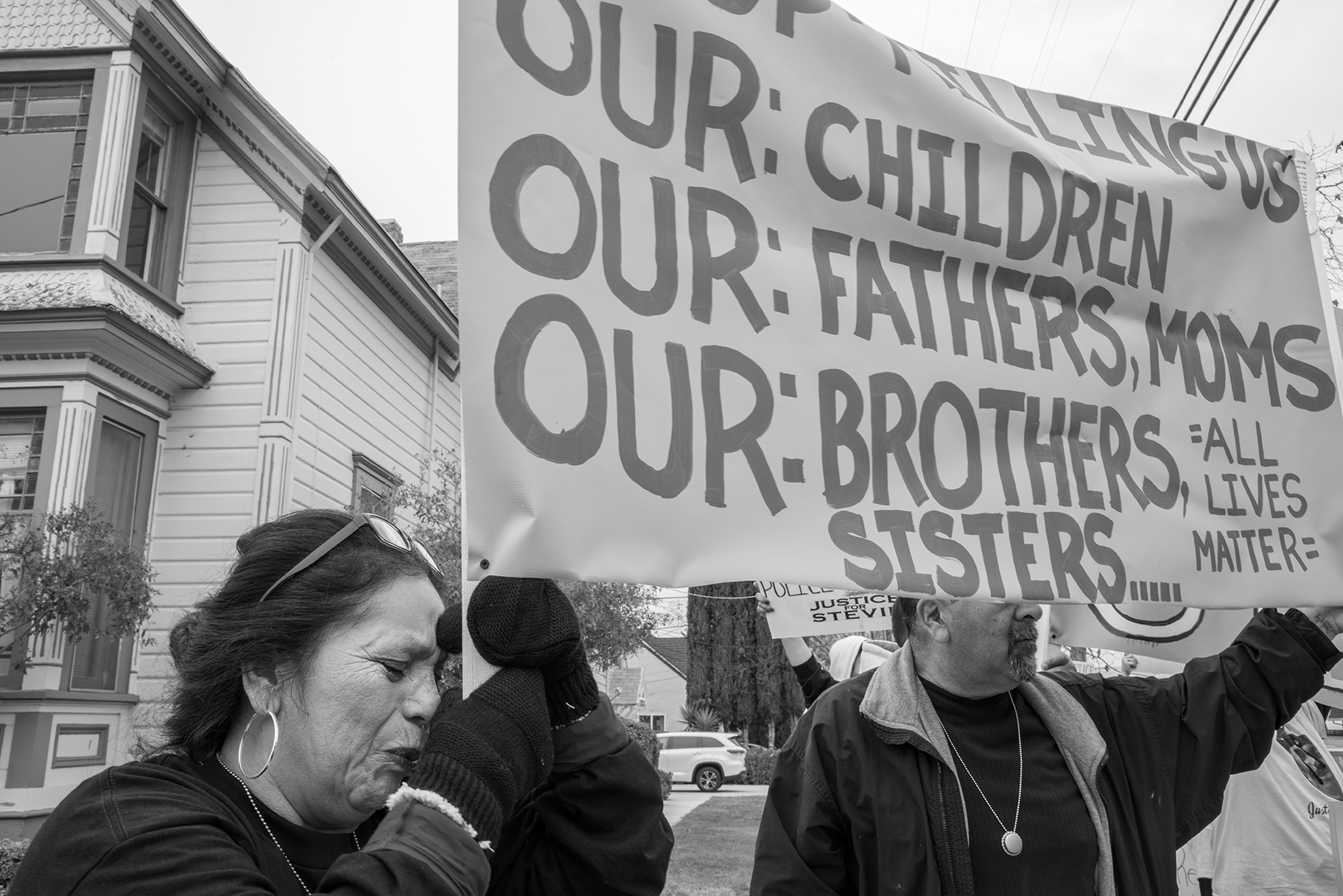 Martha Silos, Stevie's mom, walks in front of the march. Most of the time,
she is composed. But in between moments, especially when Stevie's name is called into the chants, she breaks into tears. When they saw Stevie's body at the funeral home, they asked to take pictures. "I wanted to see him as he was." 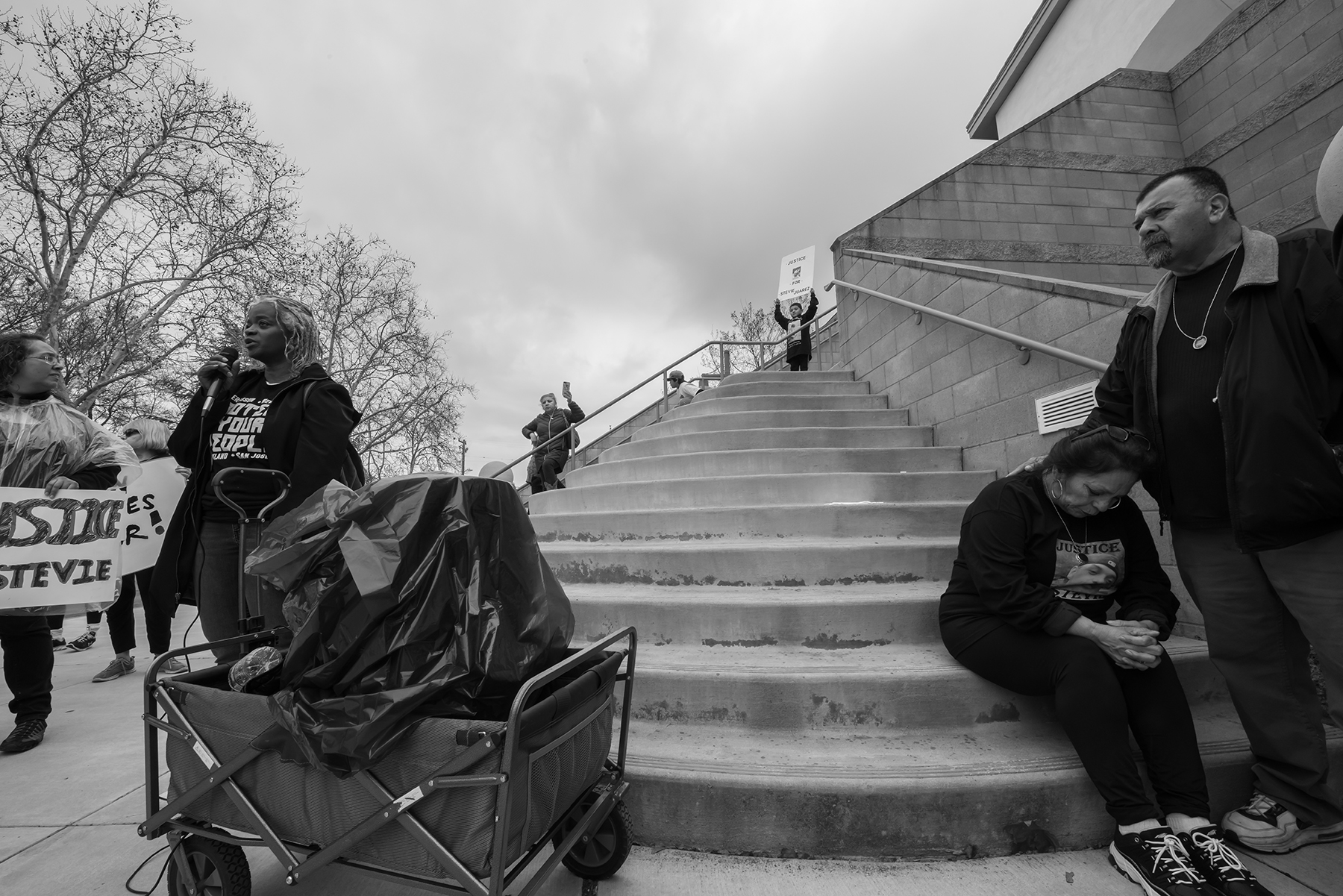 The last time Martha was at the steps of Gilroy's police department
was the night that Stevie was killed -- when she waited, asking for answers.
This time, she showed up with the back-up of community. Sharon Watkins, left, who herself lost her son Phillip Watkins to San Jose police, is strong in her words. As a mother who knows the kind of pain that Martha feels, she says,
"You are not alone. All the San Jose families are here with you." 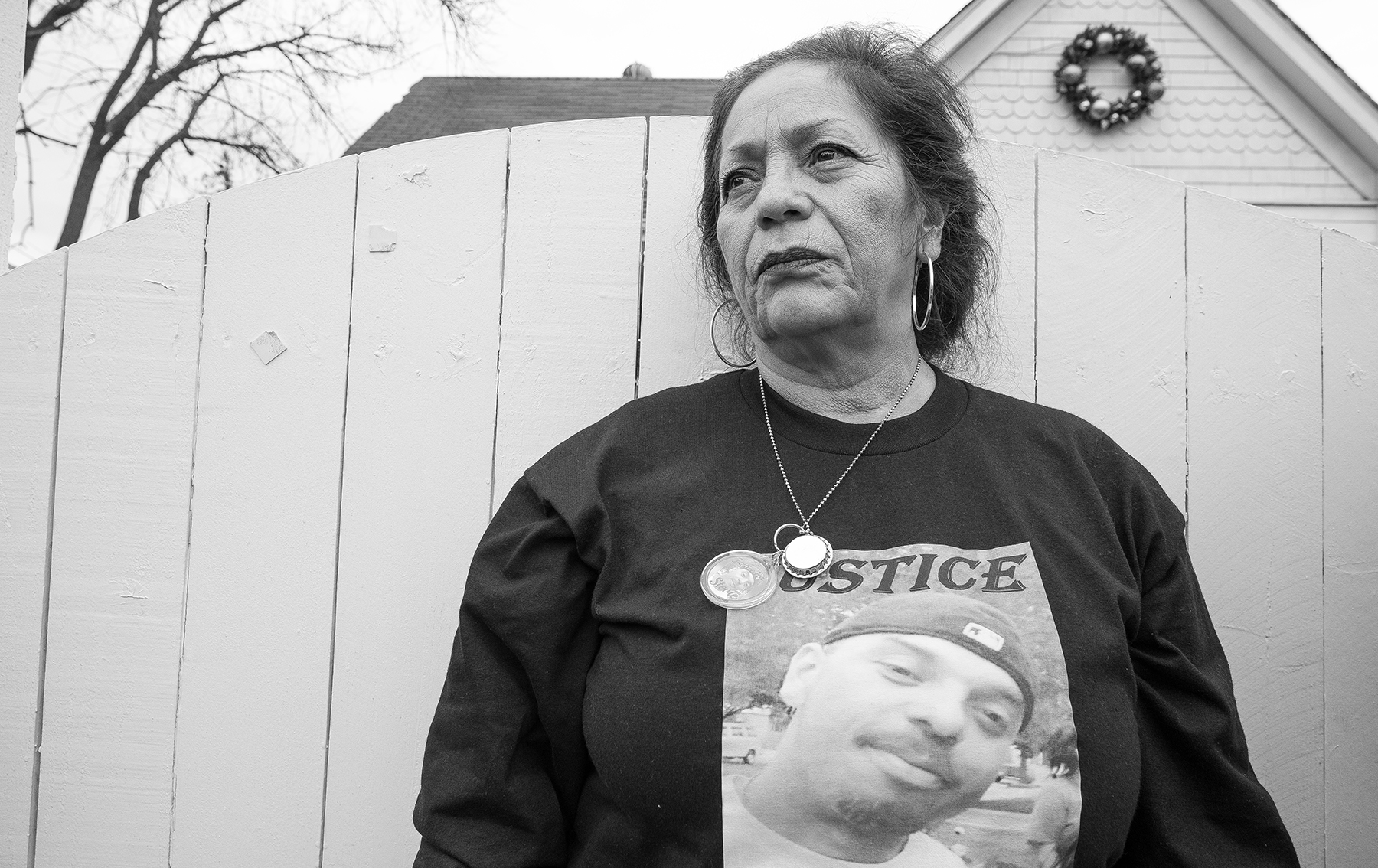 Standing in front of the house that Stevie was killed,
Martha is held today by the strength of her community. Justice for Stevie.

Related Media:
"The Sweetest Little Boy" - A Sister's Reflection on the Life of Michael Tyree
Four Months Without A Son, Brother, Husband, and Father
Remembering My Son