Report from Families Who Have Lost Loved Ones to Police 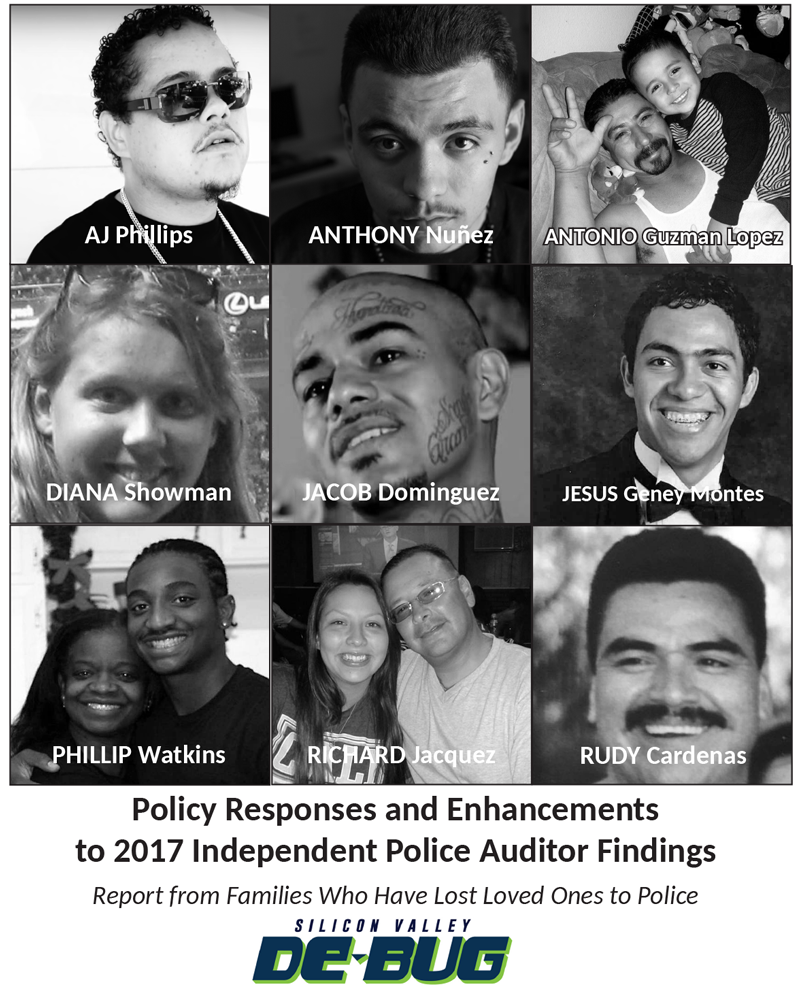 Families who have lost loved ones to police violence gathered at Silicon Valley De-Bug to review and analyze the findings and recommendations of the recently released 2017 San Jose Independent Police Auditor Report. The group that informed the analysis which produced this policy report includes family members of: AJ Phillips, Anthony Nuñez, Antonio Guzman Lopez, Diana Showman, Jacob Dominguez, Jesus Geney Montes, Phillip Watkins, Richard Jacquez, and Rudy Cardenas. While the group agreed with the recommendations of the IPA, they proposed enhancements of specific recommendations, as well as independently created policies beyond the IPA’s 2017 list. Below are the policy enhancements, identifying which recommendations the families analysis is responding to, as well as the independently created recommendations. This list is informed from the group’s personal experiences, as well as their review of the findings of the 2017 IPA report.

RESPONSE: A training bulletin is not enough. All SJPD officers should undergo thorough and up-to-date Crisis Intervention Training for all officers. This training must be based on compassion and safety for the individual and family undergoing the mental health crisis, must include de-escalation tactics, and should include the experiences of families who themselves lost loved ones to the police. This training should also include city and county resources for the community. Officers should be required to participate in these trainings yearly.

RATIONALE: From January 2013 – November 2017, 17 out of the 34 officer involved shootings involved someone with a serious mental health issue. 15 of those shootings resulted in death.  In the meantime, only half of SJPD officers have completed 40 hours of required crisis intervention training.

RESPONSE: Information and coordination should be improved between the City of San Jose police department, Santa Clara County Sheriff department, and county resources for mental health.

RATIONALE: From the experiences of families who lost loved ones to police – particularly the ones whose loved ones were suffering from mental health issues – the least volatile experiences with law enforcement took place when the officers knew the history of the individual.  In some of the families’ experiences, the fatal incident resulted when the police officers didn’t previously interact with the person.  There is an inconsistency in how these situations are then addressed.

RESPONSE: The families agree that SJPD should provide a consistent definition of Community Policing and Procedural Justice. The terms should be defined with community input.

RATIONALE: These concepts are widely used in discussions regarding policing aims in San Jose, yet take on different meanings, which leads to different conclusions and understandings.

RESPONSE: There needs to be a clear category that captures mistreatment of individuals in custody.  Some examples of department initiated investigations in the Chief’s memo categorizes incidents that range from ‘officer discharging a firearm at a vehicle in violation of a policy” to ‘officer drove a city vehicle while off duty and consumed an alcoholic beverage’ to ‘officer failed to follow city travel policy’ all under “Procedure.”

RESPONSE: Family and friends who accompany individuals lodging complaints to the police department should not be given less credibility when supporting their loved ones.  Family and friends are often witnesses themselves to an incident, and can offer additional evidence in a complaint.  These individuals know the person the most.

RATIONALE: The evaluation of complaints lodged to IA or IPA should have clear processes and decision-making criteria that reflect the weight of the issue they are bringing to the oversight body.  If the community is encouraged to make complaints to hold police officers accountable, having unclear categories and giving less credibility to accompanying witnesses discredits the process to the community, and ultimately discourages individuals from making this step.

(The following policies are additional recommendations made by families that go beyond the scope of the IPA Report.)

Some of these incidents that are investigated by the IA or the IPA could involve cases where the person arrested is now facing criminal charges.  When police misconduct is involved in an incident where the civilian is charged with a criminal offense, these findings should be made available immediately to the defense attorney so the harm of the misconduct does not also result in taking away a person’s liberty.

RATIONALE: When civilians are victims of police misconduct, they must not also suffer criminal consequences.

All officer-involved shootings should trigger the involvement of the Independent Police Auditor with or without a citizen complaint.  The IPA should be immediately called to the scene of any officer-involved shooting and able to monitor and or work collaboratively during Internal Affairs interviews. In addition, the IPA should be able to automatically review any violation of use of force policies and if any de-escalation tactics were used by law enforcement to avoid the use of force. The SJPD Chief also needs to release annual memos from his department regarding officer-involved shootings.  These memos should include findings and policy changes, if any, resulting from the incident.

RATIONALE: The value of any police training modules is based on how in depth the training is, how officers are comprehending and internalizing the information, and how they are applying the training in the field. As such, understanding how trainings are being understood and their impact is critical to evaluate the usefulness of trainings.

When there is an officer involved fatality, policies should be put in place that the police department not make public comments that disparage the deceased, or bias the public against them.

RATIONALE: After officer involved fatalities, the police department sometimes makes comments to the media that harm the reputation and memory of the deceased. The process is particularly injurious to the family and community of the individual who are in mourning.

Related Media:
Remembering My Son – AJ Phillips Was Killed By SJPD in 2015
A Performance Dedicated to My Brother, Phillip Watkins
Words I Never Thought I Would Have To Say, "Justice for Harpo"